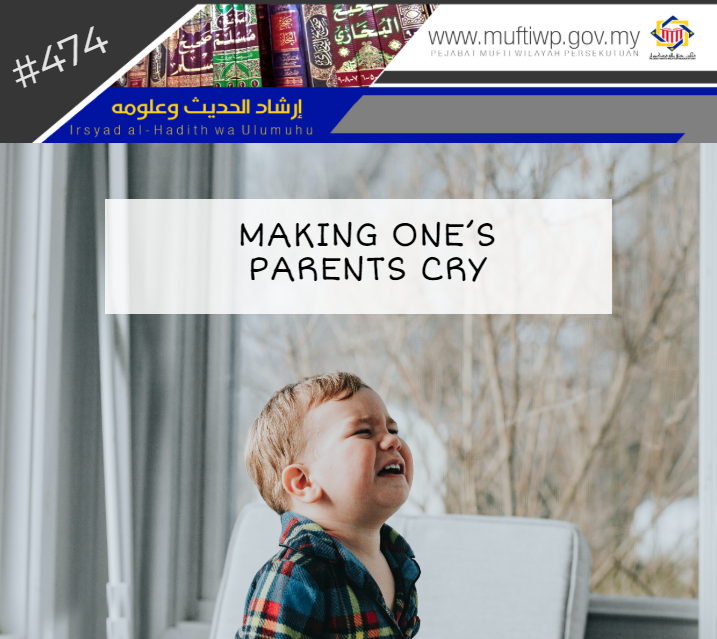 Assalamualaikum. Is it true that making one’s parents cry is included as a major sin? Is there a hadith which explains this matter?

“And your Lord has decreed that you not worship except Him, and to parents, good treatment. Whether one or both of them reach old age [while] with you, say not to them [so much as], "uff," and do not repel them but speak to them a noble word.”

Dr Wahbah al-Zuhaili said in his commentary on the above hadith, Allah SWT bound numerous verses related to worship with the commandment of doing good and practising ihsan towards one’s parents with the best behaviour when communicating or dealing with them. The reason is they are the absolute reason after Allah SWT for the existence of humans. (See Tafsir al-Munir, 15/54)

According to the above question, we did not find any hadith that mention about making one’s parents cry as one of major sins except an athar from Ibnu Umar R.Anhuma as recorded by Imam al-Bukhari in his book al-Adab al-Mufrad:

"Making parents weep is part of disobedience and one of the major wrong actions." (See al-Adab al-Mufrad (31), 1/25)

Although the athar is from Ibnu Umar R.Anhuma and not from the Prophet PBUH, if a person’s parents cry because of his bad actions, then it is considered as a sin for it falls under the act of disobedience towards his parents. The reason is the punishment for the sin of disobeying one’s parents is hastened by Allah SWT even in this world.

“Every sin will be delayed by Allah SWT of its punishment according to His will until the day of Judgement in the hereafter except the disobedience towards one’s parents. Thus, indeed, Allah SWT will punish the sinner while he is still alive before his death.”