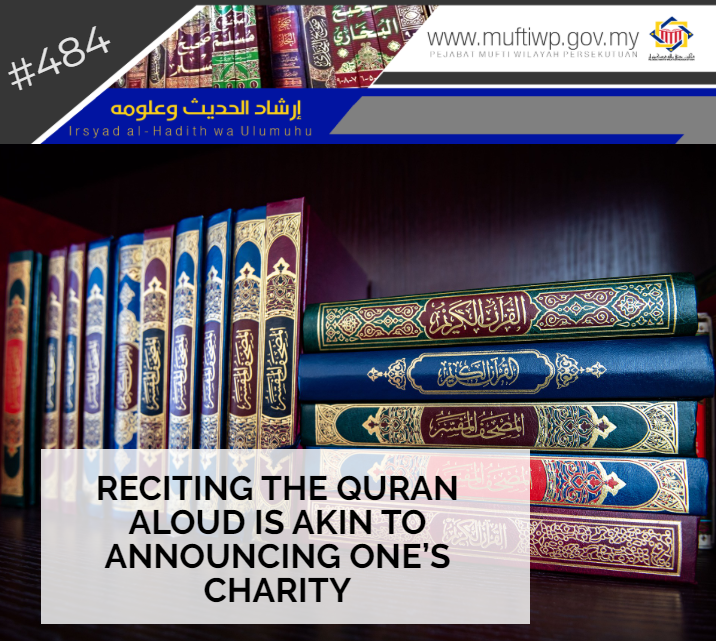 Is there a dalil regarding the prohibition against reciting the Quran aloud for it is like a person announcing his charity?

Al-Quran is a miracle revealed by Allah SWT to the Prophet Muhammad PBUH through the angel Gabriel. Furthermore, there are numerous advantages and rewards for those who recite and practice the holy verses of al-Quran as stated in the Quran and sahih hadiths of the Prophet PBUH. Among them are:

According to the above question, there is a hadith which narrates a comparison between a person who recites the Quran aloud and he is likened to a person who publicly gives charity.

Imam al-Tibi when commenting on the hadith said, there is athar (narrations) stating the advantages of reciting the Quran aloud. Furthermore, there is also athar (narrations) regarding the advantages of reciting the Quran in a low voice. Thus, in harmonizing these wisdoms from the hadiths, it is concluded that it is prioritized to recite the Quran in a low voice if a person fears he would be from among the riya’ (show off/pretentiousness). While reciting the Quran aloud is prioritized for those who do not worry about this attribute (riya’) on the condition that he does not disturb others such as other people who are praying, sleeping or others. The reason is by reciting the Quran loudly, it would also benefit others who listen, learn and feel at ease and it is also an eminence of Islam for it is able to firms the heart of the person who is reciting it, motivates a person, preventing sleep (excessively) and instigate others to perform worship. Thus, if all of these can be achieved by him reciting the Quran aloud, it is prioritized for him to do so. (See Tuhfah al-Ahwazi, 8/191)

Among the athar or hadith which encourages the recitation of the Quran out loud is:

“Beautify the Qur'an with your voices.”

Imam al-Khattabi said that the meaning from the above hadith is to beautify your voices when you are reciting the Quran and this is stated by various hadith scholars. (See ‘Aun al-Ma’bud, 239/4)

Moreover, according to Imam al-Nawawi, the above hadith means that a person should beautify his voice when reciting the Quran so that people will like to listen to the recitation. (See Fatawa Imam al-Nawawi, 293)