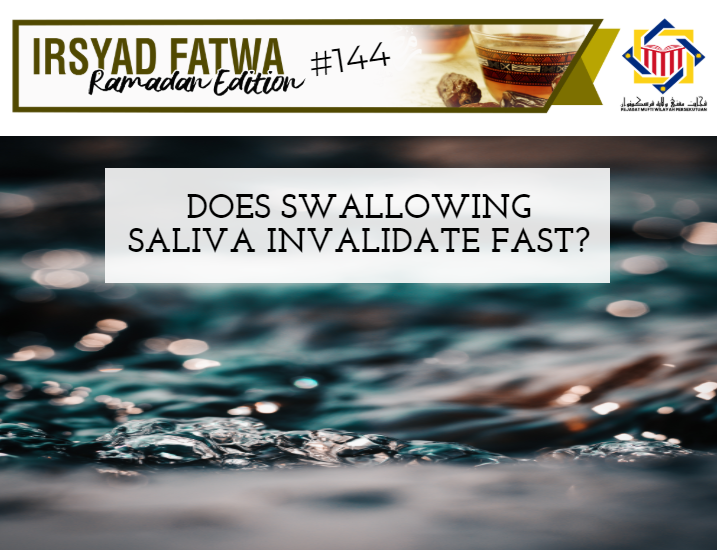 Saliva is water inside a person’s mouth for as long as it stays inside his mouth. However, if the saliva is excreted out from the mouth it is called as بُصاق (the spit of a person).

“If saliva is swallowed, then it does not invalidate the fast.”

Whereas, in his famous book Fatawa al-Nawawi, he said:

When a fasting person tasted food but did not swallow it or he chew bread or others but did not swallow it or he collected his saliva or a fly entered his body cavity unintentionally or he was kneading flour or wheat or others and its dust wafted into his mouth when he opens his mouth or he accidentally swallowed water when he was gargling (not done excessively), then does it invalidate the fast?

Answer: All of these do not invalidate fast. See Fatawa Al-Nawawi (1/90).

While in al-Majmu’, he said: “Swallowing saliva does not invalidate a person’s fast according to the ijma’ (consensus of scholars) when it is a natural reflex. The reason is it is hard to avoid doing it.”

Imam al-Nawawi also stated that there are three conditions when a person swallows his saliva and it will not invalidate his fast, we simplify them into the following points:

First: It is purely saliva. If the saliva is mixed with something else and changes colour, then his fast is invalid if he swallows it.

Second: He swallows the saliva through its cavity (mouth). If the saliva was excreted from his mouth then using his tongue or others, he fills it back into his mouth and swallows it, then this will invalidate his fast.

Third: He swallows his saliva normally (natural reflex action). If a person collects his saliva in his mouth then swallows it, does this invalidate his fast? Hence, there are two famous opinions on this matter in madhhab al-Syafi’e and the sahih opinion states that it does not invalidate his fast. Refer Al-Majmu’ Syarah Al-Muhazzab, Al-Nawawi (6/318).

To close, we would like to state that among the matters which are included in umum al-balwa (unavoidable matters) for a fasting person are swallowing his saliva, smelling scents and exposure to the dusts in the environment, hence all of these do not invalidate a person’s fast.