IRSYAD AL-FATWA SERIES RAMADHAN EDITION 146: WHAT IS MEANT BY THE TWO HAPPINESS FOR THOSE WHO FAST? 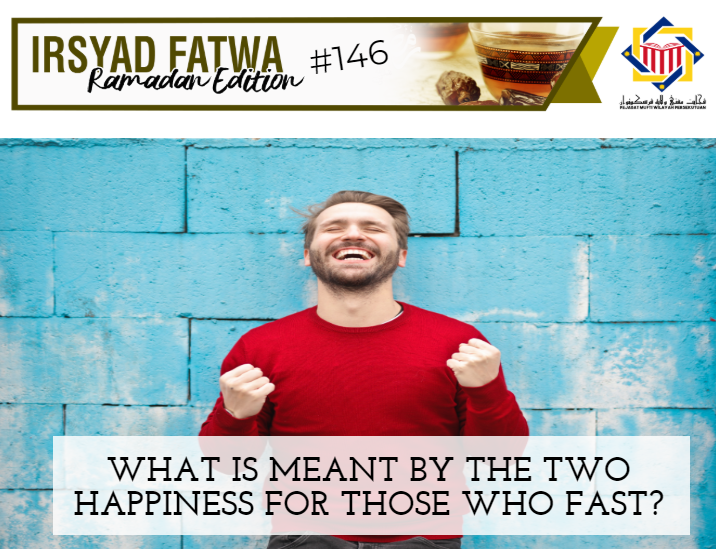 Assalamualaikum ustaz. I want to ask what is the meaning of the two happiness for people who fast; which are the happiness when he breaks his fast and when he meets his Lord? Hope for an explanation from you. Thank you.

Indeed, Allah SWT has promised rewards and honour for those who fast. There are numerous hadiths which mentioned these advantages. Among them is the hadith which states:

"There are two joys for the fasting person: the joy when he breaks his fast, and the joy of when he meets his Lord."

In the above hadith the Messenger PBUH stated that for a person who fast, he will experience two joys, which are the joy when he breaks his fast and when he meets his Lord in the hereafter.

Scholars commented on the meaning of this two happiness, saying:

“And whatever good you put forward for yourselves - you will find it with Allah. It is better and greater in reward. And seek forgiveness of Allah. Indeed, Allah is Forgiving and Merciful.”

The same is stated in another statement of Allah SWT:

“The Day every soul will find what it has done of good present [before it],”

Thus, when a person who had fasted see the rewards he is getting from Allah SWT, he would be elated with his fast that he had performed to the best of his abilities. (Refer Lathaif al-Ma’arif Fiima Lil Mawasim al-‘Amm Min al-Wazhaif: 216-217)

According to the above discussions, we would like to state the meaning of both happiness is happiness in this world and the hereafter. In this world, a person who fasts will be happy when he is able to do what was prohibited when he was fasting such as eating and drinking. While the same in the hereafter where he will be joyful when he attains the great rewards Allah SWT has stored for him, hence, he would be happy reaping the rewards of his worship. Wallahua’lam.

May Allah SWT give us all the correct understanding in His religion as well as bless us with taufiq and hidayah so that we will be able to continue worshipping Him sincerely. Amin.