IRSYAD AL-FATWA SERIES 501: IS IT PERMISSIBLE FOR A WOMAN TO WEAR GOWNS WITH LONG TRAINS? 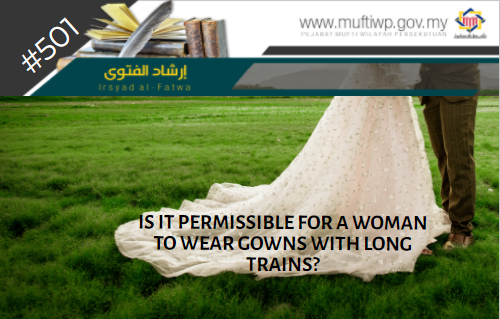 I see that it is a trend for the ladies to wear gowns with long trains following the current fashion and trend. Normally, those gowns are worn during the wedding reception and prestigious events. The question is, what is the ruling for a woman wearing clothes with long trains?

Allah SWT command His slaves to wear clothes that cover the awrah. This is in accordance with the saying of Allah in the Quran:

O children of Adam, We have bestowed upon you clothing to conceal your private parts and as adornment. But the clothing of righteousness - that is best.

Based on the above verse, there are three types of clothing mentioned by Allah SWT which are clothes to cover the awrah, clothes as adornments and clothes of righteousness. The phrase “اللباس” in the verse refers to basic clothes (dharuriyyah) to cover the awrah. While “الريش” is something worn to be seen as beautiful on the outside (takmilat). While the clothes of righteousness intended in majazi form (metaphor) refers to good deeds according to Ibn Abbas. (See: Tafsir al-Quran al-Azim (3/400).

Generally, Islam never fix certain brands for Muslim apparels. This shows the flexibility in wearing clothes according to local custom even to follow the trend. However, a thing to be taken consideration of is to fit the standards of covering the awrah completely as well as other standards set by syara’.

Next, a woman is permitted to wear clothes which length of hem is one cubit long from the ankle in order for her heel (the awrah) to not be seen. This is in accordance with a hadith narrated by Abdullah bin Umar R.Anhuma where the Prophet PBUH said:

"Whoever arrogantly drags his garment, Allah will not look at him on the Day of Judgement." So Umm Salamah said: "What should the women do with their hems?" He said: "Slacken them a handspan." So she said: "Then their feet will be uncovered." He said: "Then slacken them a forearm's length and do not add to that."

The hadith explains that women’s feet is part of the awrah. (See: Nail al-Authar (301). While Ibn Hajar al-Asqalani when commenting the above hadith states:

“Women should drag their clothes more than the ankle (isbal) to cover their whole feet as it is awrah. This is different with the ruling for men who are prohibited to drag their clothes or trousers more than their ankle (isbal). Al-Qadhi Iyadh has cited the ijma’ (scholarly consensus) on the prohibition of isbal which is specified for men and not including the women” (See Fath al-Bari 10/259). Further discussion on the ruling of isbal for men, kindly refer us in Irsyad al-Fatwa Series 205.

To answer the above presented question on women wearing gowns with long trains due to following the fashion like wedding gown or others which is more than one cubit, we are inclined to state that women are only permitted to lengthen their gown for one cubit from the ankle to cover her foot (awrah) completely like the stated hadith. When one wears a gown which is purposely designed to drag to more than one cubit, it is a form of wastage in clothing, whatnot when it is followed by the intention to boast around by portraying one’s beauty excessively. Islam prohibits its ummah from wasting and boasting based on the following dalil:

O children of Adam, take your adornment at every masjid, and eat and drink, but be not excessive. Indeed, He likes not those who commit excess.

The above verse shows that humans should be moderate in doing something because Allah dislikes those who are extravagant. (Refer Tafsir al-Maraghi, 4/2174). This verse also explains that Allah SWT dislikes those who are wasteful in foods, drinks and all other aspects. (Refer Tafsir al-Muyassar 1/154). Even, Allah explains that being wasteful is the habit of shaytan in accordance with the following statement:

Indeed, the wasteful are brothers of the devils, and ever has Satan been to his Lord ungrateful.

Every Muslim should abstain himself from matters which bring about feeling of boastful and self-deluded. This is in accordance with the following dalil in al-Quran and hadith:

And Allah does not like everyone self-deluded and boastful –

Excessive in clothing will bring about the feeling of self-deluded and boastful towards others. The Prophet PBUH prohibits wearing clothes to be seen as famous. This is based on a hadith narrated by Ibn Umar R.Anhuma where the Prophet PBUH said:

‘Whoever wears a garment of pride and vanity, Allah will clothe him, on the Day of Resurrection, in a garment of humiliation.’

The meaning of syuhrah clothing is the clothes which are apparent of its differences to other people in term of its colour or design which may attract others’ attention towards him and may nurture the feeling of ujub and takbur for the wearer. The hadith also shows the prohibition of wearing syuhrah clothing. (See: Nail al-Authar, 303).

It is different for those who are able to wear nice clothing followed by the feeling of tawadu’ (humility) with the intention to portray Allah SWT’s blessings upon them. This is in line with a hadith of the Prophet PBUH who advices his rich companions by saying:

When Allah gives you property, let the mark of Allah's favour and honour to you be seen.

Consequently, after analyzing the arguments presented, women are permitted to wear long clothes not more than one cubit from the ankle to cover her awrah of the foot. If a woman wears a long garment designed purposely to drag due to following fashion and current trend, it is seen as a form of wastage and boastful. In this, Islam gives a reminder to not waste and be boastful in clothing to avoid the feeling of self-deluded and boastful towards others. Hence, Muslim ummah should choose wisely on the characteristics of garments which cover their awrah completely as well as following the standards set by syara’.

Lastly, may this explanation able to give understanding to the society and let us pray for us to be able to live our life in accordance with the true teachings of Shari’a.