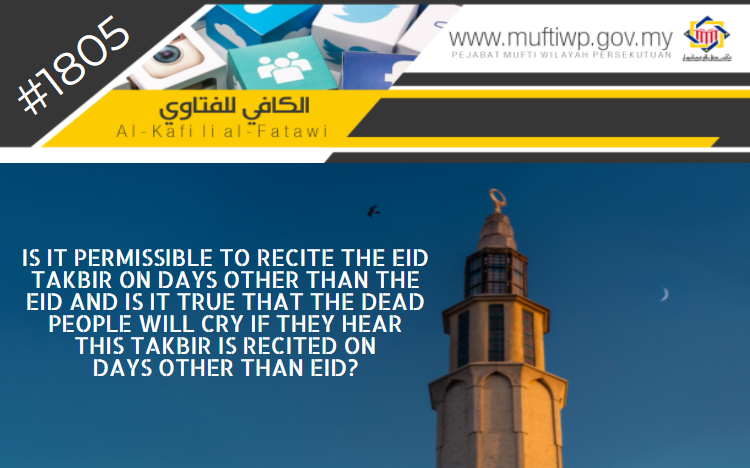 Assalamualaikum. I have several questions. The first is, is it permissible for us to recite the ‘Eid takbir loudly on days other than the first and second day of ‘Eid? The second is, is it true that the dead people will cry if the takbir is recited not on its time?

Reciting the ‘Eid takbir loudly on other than the ‘Eid and the tasyrik days is not Sunnah to do and it may cause some weirdness as well as fitnah among the society. However, if it is done individually, it is permissible and even commendable as reciting dhikr to Allah SWT is a commanded action and ‘Eid takbir is one of dhikr to Allah SWT. While pertaining to reciting ‘Eid takbir on days other than the ‘Eid causing the dead people to cry, it is not mentioned in any nas and dalil stating so.

Celebrating the ‘Eid al-Fitr with takbir is to highlight the eminence of Islam as well as a way of celebrating the victory in facing the test and trials in the Ramadhan. Reciting the takbir is Sunnah based on the saying of Allah SWT:

and [wants] for you to complete the period and to glorify Allah for that [to] which He has guided you; and perhaps you will be grateful.

Muslims are sanctioned to recite the takbir when the sun sets on the final day of Ramadhan with a loud voice to show happiness and as the eminence of Islam. Imam al-Khatib al-Syirbini mentioned in his book:

“These all are related to the ruling of reciting takbir in loud voice and making it the eminence of that day (the day of ‘Eid).” [1]

It is also Sunnah for the Muslims to do so at all time and place starting from the setting of the sun on the final day of Ramadhan until the imam lift his hand for takbiratul ihram to perform the ‘Eid al-Fitr prayer. This is as mentioned by Dr. Wahbah al-Zuhayli in his book:

According to jumhur al-'ulama: Reciting takbir is when a person is in the home, at the mosque, the market, and on the road. Which is on the day of 'Eid before prayer (the Sunnah Eid prayer) with loud voice until he is about to perform the prayer. [2]

Therefore, it is clear that it is Sunnah to recite the ‘Eid takbir with a loud voice to show happiness and to highlight the eminence of Islam, and it is even sanctioned on the day of ‘Eid and the tasyrik days only.

However, a question arises on that is it permissible to recite the ‘Eid takbir on other days. Hence, in answering this question, basically, takbir is included under the dhikr and may be done at all times. In fact, it is among the beloved verses by Allah SWT based on the general meaning of the hadith narrated by Samurah bin Jundub RA, where the Prophet PBUH said:

“The most beloved words to Allah are four: Glorified is Allah, and The praise is for Allah, and there is none worthy of worship but Allah, and Allah is the Greatest.”

However, reciting ‘Eid takbir loudly on days other than the ‘Eid and tasyrik days is not something Sunnah. This is because the ‘Eid takbir is only sanctioned on the day of ‘Eid and tasyrik, but it is not a problem to be done individually. Pertaining to this, Imam al-Nawawi cited the opinion of Imam al-Haramain, stating:

“Everything that we mentioned is for the takbir which is recited with a loud voice and made the eminence. However, if a person uses all of his time by reciting takbir by himself, then there is no prohibition in doing so”. [3]

Referring to the second question, it is said that the dead people will cry when hearing the ‘Eid takbir be recited on the days other than the ‘Eid, whether before or after it. This matter has no basis and evidence proving so.

However, it is undeniable that the dead people are able to hear the deeds done in this dunya. For example, a dead person may hear the footsteps of the people who buried him when they are returning home from the burial. This is as mentioned in a hadith narrated by Anas RA that the Prophet PBUH said:

When a servant (of Allah) is placed in his grave, and his Companions depart from him, he hears the stepping sound of their shoes.

Reciting the ‘Eid takbir in loud on days other than the ‘Eid and the tasyrik is not something Sunnah and it may cause some bizarreness as well as fitnah among the society. However, if it is done individually, it is permissible and even commendable as reciting dhikr to Allah SWT is a commanded action and ‘Eid takbir is a form of dhikr to Allah SWT. While pertaining to reciting ‘Eid takbir on other than the ‘Eid day will cause the dead people to cry, it is not mentioned in any nas and dalil stating so.