AL-KAFI #1806: THE RULING OF WITHHOLDING THE GOVERNMENT QUARTERS WHILE ALREADY OWNING A HOUSE WITHIN THE RADIUS OF 25KM 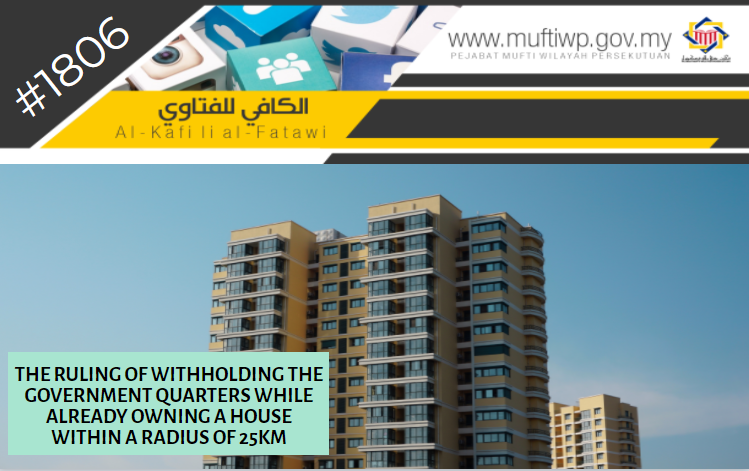 What is the ruling for a government servant to withhold the government quarters that he lived after buying his own house?

The action of not turning in the quarters for those having a house within a radius of 25km is wrong. This is because the person has breached the contract mutually agreed beforehand. Therefore, a government servant is advised to be truthful in fulfilling the conditions mutually agreed to not cause future problems.

Government quarters is housing provided by the government for the Federal Government Servant and Statutory Bodies who serve in the same station living in the same quarters under the maintenance of the Property Management Division (PMD) or those who serve in any location or Department approved by the PMD to apply for the government quarters. The PMD has put several specific conditions for each government servant to qualify them to live in the quarters. All information given shall be valid and authentic. If the information is fabricated, the PMD has the right to reject the application or revoke the approval of the application. The PMD also has put the condition that if the applicant already owns a house within a radius of 25km from the quarters, he is obligated to return the quarters to the PMD management.

Basically, there is a contract mutually agreed upon between the government servants and the PMD management which shall be obliged. Islam highly emphasizes its people to hold on to the oath. This is because fulfilling an oath proves honesty in a person’s life. There are many discussions related to fulfilling an oath mentioned in al-Quran and the hadith of Prophet Muhammad PBUH. Allah SWT says:

O you who have believed, fulfill [all] contracts.

Dr. Wahbah al-Zuhayli commented on this verse stating that breaching an oath/ contract is a sinful act. The matter is mentioned in his tafsir:

“An oath/ promise is a priority and something to hold on to firmly. Breaching it is an act of betrayal and nifaq. Breaching an oath is an act of breaching the trust and denying the right (of other people). So, fulfilling an oath is wajib according to shara’. Whoever breaches the oath and promise, he is in fact committing a sin.”

And fulfill [every] commitment. Indeed, the commitment is ever [that about which one will be] questioned.

Sheikh al-Maraghi stated that fulfilling an oath is upon all oath and promise which aligns with shara’ and law under the blessing of Allah SWT.

At the same time, there are several hadiths mentioning the act of fulfilling a promise or holding to an oath. The hadith of the Prophet PBUH narrated by Anas R.A, said: The Prophet PBUH once gave a sermon to us. He said:

“He who is not trustworthy has no faith, and he who does not keep his covenant has no religion."

Next is the hadith narrated by Abu Hurairah where the Prophet PBUH said:

Muslims must keep to the conditions they have made

Imam Ibnu Ruslan when commenting on this hadith is of the opinion that the meaning of عَلَى شُرُوطِهِمْ is they keep holding onto their promise without breaching it.

The obligation to fulfill the condition in a contract is to be fulfilled by both parties. Imam al-Mawardi said that it is wajib for both parties to fulfill each condition set in the agreement.

The action of breaching the conditions mutually agreed in a contract is wrong. This is because both parties shall abide by the agreed conditions. If one of the parties breaches the conditions, the other party has the right to revoke the contract.

In conclusion, the action of not turning in the quarters for those having a house within a radius of 25km is wrong. This is because the person has breached the contract mutually agreed beforehand. Therefore, a government servant is advised to be truthful in fulfilling the conditions mutually agreed to not cause future problems.