QALAM MUFTI #18: OPEN LETTER TO THE LEADERS AND CITIZENS OF MALAYSIA 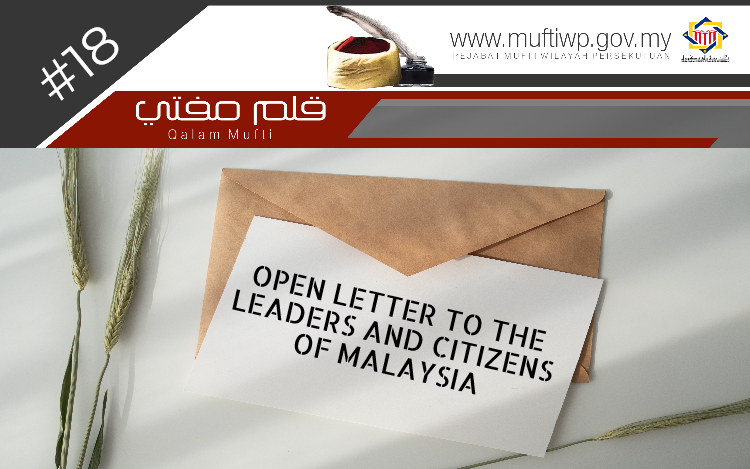 We start with Alhamdulillah, praise and thanks to Allah for the countless blessings He has blessed us all with. Blessings and salutations to the Prophet Muhammad PBUH, his wives, his family, companions and all those that follow his teachings to the day of judgement. On the principle of reminders towards truthfulness and patience (التواصي بالحق والتواصي بالصبر), we are compelled to write this letter. Allah SWT state:

“The religion is Nasihah.” the people said, ‘To whom should it be directed?’ He replied, “To Allah, His Book, His Messenger (ﷺ), to the leaders of the Muslims and to the common folk of the Muslims.”

Religion is advice. Which means in a religion there are advices. The reason is, in the advice there is obedience to Allah SWT and His messengers, believe and worship His books and the sunnah of His prophets.

Advice for the leaders of the Muslims are advising them by: explaining the truth to them without causing them worry or fear, helping and cooperate leaders in matters where it is an obligation for us to help them, be prepared to fight and defend our country from foreign enemies and advise them with wisdom and courtesy. A good leader is a leader with taqwa, who helps his people who is in need. The start of the destruction in a government is when the relationship between the leaders and the people is bad.

Advice for the general Muslims is advising them with dakwah towards Allah SWT, amar makruf and nahi mungkar, teaching them goodness and others. Al-Nasihah for the Muslims is to teach them the importance of the worldly life and the hereafter. The disheartening in today’s Muslim community is that they no longer fulfil this right of advising other Muslims especially in terms related to the hereafter. They focus and limit their attention of only the importance of the worldly matters. (See  al-Kafi Syarah Hadis 40, pg. 75-80)

Regarding advice and opinion offered to our leaders, we are affected by the book written by Imam al-Ghazali titled al-Tibr al-Masbuq fi Nasa’ih al-Muluk. In the mukadimah of the book, the story of scholars advising the leaders in a form of a story, wisdom and persuasion to be fair.

Basically, the purpose this letter is written is due to the situation we see happening in Malaysia recently, where it greatly worries us all as Malaysians. Reviewing the newspaper articles and social media these past few days drove us to voice what is in our heart and mind so that we could all reflect together. Hopefully, this modest advice from a small person like me could be of benefit for us all.

We put this matter into two main points:

Scholars said: “The two blessings that people usually take for granted are the blessing of health and peace.” After the organizers of ICERD Peace Demonstration get the permission from Kuala Lumpur City Hall (DBKL), which in our opinion is a sign of trust given to the organizers of the event.

Then, we presume that the organizers should honour the trust given to them and follow the following guidelines:

This is in accordance with a hadith from Ibn Umar R.Anhuma, where the Prophet PBUH said:

"Whoever takes up arms against us, is not from us."

Imam al-Nawawi said: Here, the scholars explained that taking up arms against us means not from the people who follow our guidance and practise. (See Syarh al-Nawawi 'ala Sahih Muslim, 1/109)

“It is not lawful for a Muslim that he frightens a Muslim.”

Second: The need to appreciate the concept of Fiqh al-Ta’ayush (Fiqh of diversity/co-existence)

Since 2014, we have consistently emphasized on the necessity of education regarding fiqh al-ta’ayush to be applied in our Malaysian society. We have detailed the framework for Fiqh al-Ta’ayush in Bayan Linnas Series 155: Concept of Fiqh al-Ta’ayush: Issues in Malaysia and Its Solutions which has been uploaded on Mufti of Federal Territories official website.

The relationship between Muslims and non-Muslims in the context of living together in a country is among the important topics in our world today. Syarak has set clear methods and principles regarding living together (ta’ayush). The Prophet PBUH is the best example and it is obligatory for Muslims to follow his good character and conduct. The prophet PBUH practised several methods and principles of al-ta’ayush with others in various situations, times and places. Furthermore, the companions of the Prophet PBUH also placed the basis of Muslims living alongside non-Muslims in harmony and peace.

Simply put, the guidelines of Fiqh al-Ta’ayush in the context of Malaysia that we are suggesting is a more open relationship between Muslims and non-Muslims in the following aspects:

A Story to Ponder

We remembered a story once told to us by our teacher. Syeikh Dr Muhammad Said Ramadhan al-Buti, who said: “In a garden there are various different types of trees. They lived happily together. Suddenly, an axe head fell and all the trees cried in fear. The reason is, surely, they would be cut down. Lastly, they went to meet the eldest tree and complained to him. The eldest tree said: ‘Don’t be scared or cry. Indeed, an axe head could never cut you down unless you give it your branches to be made into its haft.”

Hence, we should contemplate on the implied meaning of this story.

May Malaysia move forward and leave its previous times. Whether we want Malaysia to stay in the same position or move forward and advance, the choice is in our hands. Under the governance of DYMM Seri Paduka Baginda Yang Dipertuan Agong, we as Malaysians should unite and advance together towards a greater future with strong rapport and togetherness.

Let us all reflect on the statement of Allah SWT:

“…and do not dispute and [thus] lose courage and [then] your strength would depart,”

Let us all correct our intention, closing the gap in our saf and unite our society so that we can all live in harmony and peace which the hope and desire of all of us as Malaysians.

We end with the following supplications:

“O Allah! We ask for Your blessings and guidance for our hearts, please strengthen our bonds, closes the distance/misunderstandings between us, protect us from any fitnah and better our religious and worldly affairs.”