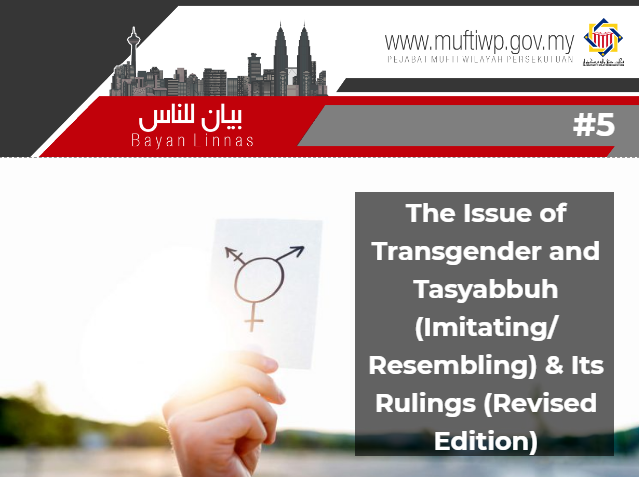 In today's globalised era, exposure to foreign culture and lifestyle are the norm in our society. All forms of culture, whether it is good or bad are quick to become a trend. Social media and the internet are huge factors in influencing society.

When a certain society is firm believers and holds a high standard of values, they are not so quick to be influenced by the newest trends. On the other hand, for a society who does not have ample knowledge in religion are susceptible and quick to accept the newest trends, even if it contradicts with Islamic teachings.

Among the popular trends among even Muslims nowadays is women imitating or resembling men and men imitating or resembling women. The reason is, a new trend in the fight against discrimination has led towards the new belief of accepting unisex. It is a deviant doctrine where there is no separation or difference between male and female. Hence, there are now young adolescent girls that bind their breasts, wear male clothing, or do anything to resemble men or to not look like a woman.

It is the same for men, where they wear women's clothing (or whose actions or conduct similar to a woman), grow their breasts through silicone or hormone injections, even when they would need to spend a huge amount of money. These types of stories are viral in our society, portraying how these groups of people are discriminated against. This, in turn, shapes our society's perception towards them, empathizing with their situation and ultimately make it seems as though it is permissible and a personal right of an individual.

Dr Abdullah Nasih ‘Ulwan stated in his book: "Our youth nowadays are plagued with the culture of blindly following the trends. Thus, it is the responsibility of us to educate them with wisdom and understanding to treat this disease." Without prejudice, these are among the propaganda that harms the eminence of Islam as a religion.

With more and more cases of men resembling women and women resembling men in Malaysia, we should contemplate on the statement made by our former Chief of Judge, Tun Abdul Hamid Mohamad: "When syarak rulings are considered through liberal values and based on Western human rights and when the syarak is challenged without valid reasons from a judge, which includes the non-Muslims, thus, the syarak will always be exposed to be ruled as invalid."

Hence, in this series of Bayan Linnas (revised edition), the issue regarding tasyabbuh or women resembling men and vice versa will be discussed again specifically.

In Malay, a female individual who acts like a man (for example, wears man's clothing and others) is also known as ‘tomboy' and the word ‘mak nyah' usually refers to men resembling a woman. While in Arabic; the word ‘tasyabbuh' literally means resembling something.

In fiqh, it means a woman resembling man or vice versa in the following:

Tasyabbuh is prohibited (haram) and is among the major sins in Islam according to prophetic and Quranic evidences. From Ibn ‘Abbas R.Anhuma, the Prophet PBUH said:

In Tuhfah al-Ahwazi  bi Syarh Jami' al-Trmizi by al-Imam al-Tabari, it is stated that it is prohibited for a man to resemble a woman in terms of clothing and adornment that is especially for woman and vice versa. The same is stated by al-Hafiz Ibn Hajar; the resemblance in terms of speech or conversation and walk or conduct is prohibited, while in terms of clothing, it depends on a certain place or custom. [Tuhfah al-Ahwazi. Dar al-Kutub al-‘Ilmiyyah, 8/57]

Al-Imam al-San'ani said that since the Prophet PBUH himself cursed the act, it clearly shows how great the sin is. The above hadith is the evidence of the prohibition of a woman resembling a man and vice versa. [Subul al-Salam. Dar al-Hadith, 2/421]

According to al-Imam al-Shaukani, the above hadith is the evidence for the prohibition of a man resembling a woman and a woman resembling a man in terms of speech, clothing and others. [Nail al-Awtor. Dar al-Hadith, 6/230]

Syeikh Dr Wahbah al-Zuhaili in his book al-Fiqh al-Islami wa Adillatuh also states that it is prohibited for a man to resemble a woman and vice versa.

The following are the fatwa issued by religious bodies of authorities:

Al-Imam al-Zahabi said: "When a woman wears the clothing of a man and act like a man, with tight clothing that made her body shape visible, then it is considered that she has resembled a man and she deserves to receive the curse of Allah SWT and His Messenger the Prophet PBUH."

The curse of Allah SWT and the Prophet PBUH is also on the husband of the woman, if he asked his wife to wear such clothing or he does not care and he does not restrict her, for it is his responsibility as her husband, it is his obligation to correct his wife and advise her to obey Allah SWT and the Prophet PBUH and to prevent her from committing sins and transgressions. This is in accordance with Allah SWT's statement in Surah al-Tahrim, verse 6:

"O you who have believed, protect yourselves and your families from a Fire whose fuel is people and stones, over which are [appointed] angels, harsh and severe; they do not disobey Allah in what He commands them but do what they are commanded."

Al-Imam al-Qurtubi in his commentaries on the above verse states that it is obligatory for a man to improve and correct himself in obedience towards Allah SWT, improving and correcting his family members the same as a leader correcting his people. Teaching them about what is permissible and what is not, preventing and avoiding sins and transgressions which is closely related to Islamic rulings. (Refer Al-Jami' li Ahkam al-Quran. Dar al-Kutub al-Misriyyah, 18/195)

Al-Imam Ibn Kathir cited the words of Mujahid regarding the commentaries of the above verse stating the necessity of taqwa towards Allah SWT and reminding family members to have taqwa and obey Allah SWT, preventing them from sin and help them in the obedience towards Allah SWT. (Refer Tafsir al-Quran al-‘Azim. Dar al-Taybah, 8/167)

Gender Identity Disorder (GID) is a situation where an individual feels as though the individual is either a male or a female which conflicts with the individual's anatomy. In the medical field, it is described as when someone insists, he/she is of the opposite gender. Gender identity disorder can happen to someone as early as a child of two to four years old.

For an individual who is born as a man, inclination towards the opposite gender is observed through his actions; whether he is inclined towards games, clothing and activities that are more feminine. While for someone who is born a woman, they are identified to incline the opposite gender through their preference in role-play, ambition and fantasies.

GID is a mental disorder that has no relation to transgender. Transgender closely related to the actions and appearance of someone. The inclination of someone to act, behave and assume the appearance of the opposite gender does not necessarily mean he suffers from GID.

Gender identity disorder can be treated through hormone therapy and surgery to help the individual to assume the gender and physical appearance that he/she identifies with. This step is taken only after a strict assessment and evaluation is conducted.

In truth, this issue is spreading in our society and should be taken into consideration to be managed and handled with wisdom. The issue regarding the rehabilitation for these people should be adapted for there is a high percentage for it to be successful. This is proven when more than 3000 individuals who are transgender (mak nyah, lesbian, gay and bisexual) has been rehabilitated through the efforts from Islamic Development Department of Malaysia (JAKIM) and Federal Territory Islamic Religious Department (JAWI).

After analysing this issue and reviewing the opinions of scholars, our opinions are as the following: