BAYAN LINNAS SERIES 183: THE ISSUE OF QAZAF: IS ACCUSATION OF LIWAT (SODOMY) INCLUDED? 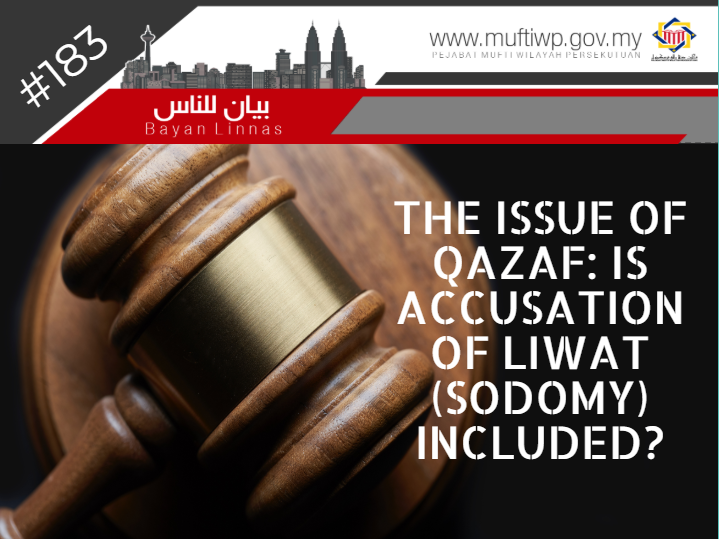 Since qazaf is a recurring and popular issue, hence, this series of Bayan Linnas is titled The Issue of Qazaf: Is the Accusation of Liwat (Sodomy) Included? Hopefully, this will give us clear understanding as a guidance. Amin.

Meanwhile, some scholars defined qazaf (قذف) as accusing someone of adultery, sodomy or denying of lineage.

In the book al-Fiqh al-Manhaji (3/427), it is stated: It is prohibited for a Muslim to accuse his brother in Islam with any indecent deed (الفاحشة), whether the accusation is true or not from his point of view. In the case that it is false, then the statement is indeed slander and an evil deed which is an abhorred and prohibited sin. While even if the accusation is true, it is an act that exposes something that is hidden and degrading someone. Thus, according to syarak, qazaf is considered as a great sin. This is in accordance with the statement of the Prophet PBUH:

“Avoid the seven great destructive sins." They (the people!) asked, "O Allah's Apostle! What are they?" He said, "To join partners in worship with Allah; to practice sorcery; to kill the life which Allah has forbidden except for a just cause (according to Islamic law); to eat up usury (Riba), to eat up the property of an orphan; to give one's back to the enemy and fleeing from the battle-field at the time of fighting and to accuse chaste women who never even think of anything touching chastity and are good believers.”

Al-Hafiz Ibn Hajar said: Imam al-Nasafi said that the above verse regarding accusation towards chaste women and the first verse explains the limit of qazaf while the second verse mentions that qazaf is included as a great sin. Thus, it (qazaf) is considered as a great sin. This is final. It is a consensus of the scholars (ijma’) that qazaf for a muhsan (man who maintains his dignity) is the same as the ruling of qazaf for muhsanah (woman who maintains her dignity). (See Fath al-Bari, 12/181)

Furthermore, qazaf is also considered as a crime where the offender will be sentenced according to hudud, where the punishment is 80 times of whipping and his testimony will no longer be accepted. This is in line with the statement of Allah SWT:

“And those who accuse chaste women and then do not produce four witnesses - lash them with eighty lashes and do not accept from them testimony ever after. And those are the defiantly disobedient,”

Ibn al-Arabi said: The conditions for qazaf are, when a person accuses someone of illicit intercourse which will result in the sentencing of hudud, whether it is adultery or sodomy, or when a father denies his child. (See Ahkam al-Quran, 6/1)

Imam Ibnu Kathir commented on the above verse stated the meaning of ‘al-Muhsonah’ is a free woman, who has reached puberty and who maintains her dignity. (See Tafsir al-Quran al-‘Azim, 6/13). According to Imam al-Nawawi, the jurists have agreed that it is still considered as qazaf when the accused is either a man or a woman. (See al-Majmu’ Syarh al-Muhazzab, 22/94)

The Wisdom Behind the Sanctioning of Qazaf

Among the wisdoms of the hudud punishment for qazaf is to protect the dignity of Muslims, for Islam is a religion that honors its followers and protects them from being degraded.

According to Imam al-Nawawi in al-Majmu’, the sanctioning of the punishment for qazaf is to protect the Muslim ummah from falling into the valleys of humiliation as a result of atrocious accusation of obscenity for such claims are easily made. (See al-Majmu’ Syarh Al-Muhazzab, 22/94)

Imagine if the punishment for qazaf was never sanctioned, surely, a person can accuse others with vile and atrocious allegations that could degrade and humiliate them. This issue is difficult to be proven or refuted by the accused. Hence, Allah SWT has given an early warning so that we are careful and protect ourselves from accusing anyone.

Is Sodomy Considered as Qazaf?

Sodomy literally means the transgressions committed by the people of the Prophet Lot, since no one has ever committed this crime before them. This is stated by Allah SWT in the Quran:

And [We had sent] Lot when he said to his people, "Do you commit such immorality as no one has preceded you with from among the worlds?

Syeikh al-Maraghi said: This immoral act has never been committed by anyone through centuries of time before them but this act is a new type of transgression of which an example of evil deed. Thus, you will be punished for your sins and the sins of all the people who follow you in your evil deed till the day of Judgement.

This is a clear indication that the transgression that they commit contradicts human nature. This is an offensive and abhorred actions naturally for humans even for the people from before them. Furthermore, it contradicts the commandments of religion. (See Tafsir al-Maraghi, 4/2279)

Dr Wahbah al-Zuhaili said: The phrase “أَتَأْتُونَ الْفَاحِشَةَ” where the hamzah in the phrase is hamzah istifham which means a sarcastic form of questioning where it is insulting and rejecting the actions of the person asked. (See Tafsir al-Munir, 8/514)

The Ruling of Sodomy

The scholars have agreed that sodomy is prohibited and is included as a great sin. Among the evidences regarding the prohibition of sodomy are as the following:

The above hadith shows that Allah SWT cursed the act of sodomy and it is also a clear warning and threat against the act which results in its prohibition and it is included as a great sin.

“(Whomever you find doing the actions of the people of Lot) then kill the one doing it, and the one it is done to.”

“Kill the person doing it and the person it is done to (sodomized), which means the actions of sodomy or homosexuality.” (See al-Istizkar, 7/495)

According to the above hadith, the indication for the prohibition of sodomy is when it is commanded to kill the doer. This shows how grave an offense it is as it is even considered as a crime in Islam and a great transgression. The great punishment for the people of the Prophet Lot AS is recorded in the Quran.

According to the consensus of the scholars of the madhab, accusing someone of sodomy is considered as qazaf, if the accuser fails to present 4 witness testimonies against the accused. We include a statement from al-Mausu`ah al-Fiqhiyyah al-Kuwaitiyyah (33/9):

“Whoever accuses a man of the action of the people of Lot, whether it is the act of the doer or the person it is done to, then he is sentenced with the punishment of hudud for qazaf. The reason is, he accuses someone of sexual intercourse which obligates the punishment of hudud, then, it is similar to qazaf for adultery. This is the opinion of al-Hasan, al-Nakhaie, al-Zuhri, Malik, al-Syafie, Ahmad, Abu Yusuf, Muhammad bin Hasan and Abu Thaur.”

“If someone accuses another person of sodomy, with words such as: “You have sodomized” or “Someone has sodomized you” then it is considered as qazaf, no matter whether the accusation is towards a man or a woman.” (Raudhah al-Tolibin, 8/311)

Qazaf for Sodomy According to the Syariah Law in Malaysia

The crime of sodomy falls under Act 559, Syariah Criminal Offences (Federal Territories) Act 1977. Under Section 25 it is stated: ‘Any male person who commits liwat shall be guilty of an offence and shall on conviction be liable to a fine not exceeding five thousand ringgit or to imprisonment for a term not exceeding three years or to whipping not exceeding six strokes or to any combination thereof.’

While under Section 41, it is stated ‘Except in cases of li'an, any person who accuses another person of committing zina without procuring four male witnesses or an iqrar of the accused person in accordance with Islamic Law shall be guilty of an offence and shall on conviction be liable to a fine not exceeding five thousand ringgit or to imprisonment for a term not exceeding three years or to both.’ [1]

It is time to do research on punishments for qazaf in Syari’ah law of Malaysia. The reason is, the most accurate and selected view upon majority of the scholars, mazhab of al-Shafi’e and al-Shafi’e himself is false accusation of liwat is included in the punishments for qazaf. We already brought along the evidences from the excerpts of the Quran and Sunnah before. By including this issue in the Shari’ah law of Malaysia, this makes it possible to be judged in Shari’ah courts.

The purpose of heavy sentencing towards the people who slander and disgrace others, especially in the issue of qazaf is to prevent people who like to accuse others in term of sexual accusations against them from continuing their evil deeds in derogating and humiliating other Muslims.

It is not just a punishment for the offender, but the punishment of hudud for qazaf is a blocking the means (sadd al-zara’i’) [2] approach in preventing this criminal offence from becoming an issue in society.

Hopefully, this discussion could give us a clear understanding regarding qazaf for us all. We pray to Allah SWT so that we are all saved from being involved in qazaf for it is considered as one of the great sins. Indeed, anything related to qazaf, whether it is in terms of accusation for adultery or sodomy is a serious offence in Islam, where there is a specific punishment stated for the accuser or offender who made the allegations without presenting four witnesses. Hence, we should be careful and advise others against making any form of accusations or allegations towards others.

We end our discussion with a supplication to Allah SWT:

[1] However, based on previous cases, the Syariah court of Federal Territories and Selangor denied the inclusion of sodomy as a criminal offense under qazaf under Section 41. The reason is, according to the Syarie judge, the said act or enactment only includes adultery as sexual intercourse between a man and woman only, thus, sodomy is not included. Hence, the criminal offense of qazaf involving sodomy is not under the jurisdiction of the Syariah Court. Wallhua’lam.

[2] The definition of al-Zaraai: It is the plural for the word zari’ah which means a road. It can either be a road towards mafsadah or maslahah. However, it is widely used to mean as a road towards harm. Hence, sad al-zarai’e means closing the doors towards harm or ruin.

The examples for Sadd al-Zaraaie’: