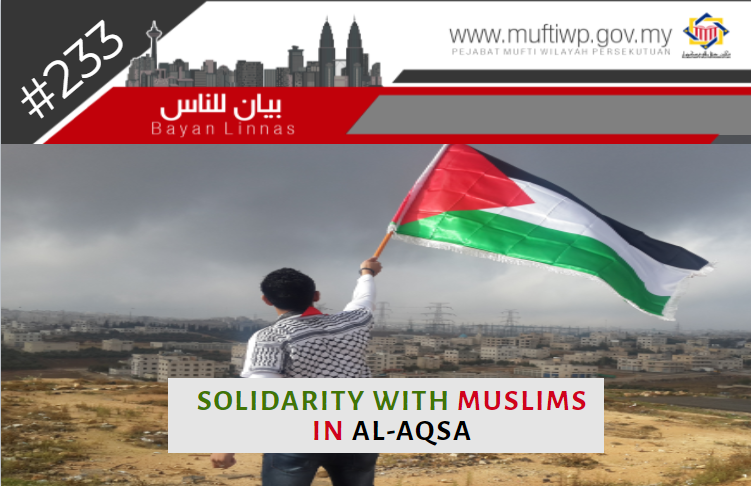 Recently we are shocked once again with the rudeness of the Israelis who disregard the honor of Ramadhan by attacking the Palestinian civilians who were doing worship in the al-Aqsa Mosque. More than 163 people were injured by the action taken by the Zionist regime. [1] They used rubber bullets and gas bombs to mess with the Muslims who were praying Tarawih prayer.

The action is considered a crime of war following the protest of the Palestinian civilians towards the ban forced by the Zionist regime upon some parts of the old cities in Bait al-Maqdis from being entered during the month of Ramadhan. The action portrays Israelis oppressive behavior and their rudeness upon the third most sacred place for the Muslims. Invasion done not only causes anger from the Palestinians, but even Muslims across the world strongly condemn actions taken by them.

The attack by the Israelis Zionist regime on the past 8th May is not something new. It is the continuation of a series of claims and assertions made by the Zionist Israelis who said that the al-Aqsa Mosque territory is the original location of the Temple Mount for Jewish people. This starts with series of arm forces for Israelis invasion of Baitul Maqdis during the Arab-Israel war on the year 1967 and for the whole city in 1980. Due to that, several attempts are done by the regime to deny the right of the Muslims to the al-Aqsa Mosque.

At the same time, eviction of Palestinian civilians in the territory of Syeikh al-Jarrah, where the original citizens who lived there for years were evicted from their own home by a court decision which is unjust to allow the Jews to build prohibited dwellings at the territory.

Al-Masjid Al-Aqsa According to the Islamic Perspective

Al-Masjid al-Aqsa is the qibla direction of the Prophets and the first qibla for the Muslims. It is also one of the masjids which are highly encouraged by the Prophet PBUH for one to visit and to perform the prayer. Abu Sa’id al-Khudri said that the Prophet PBUH said:

“Animals are saddled only for prayer in the three mosques: the sacred mosque, the Aqsa mosque, and this mosque of mine.” (These are the only mosques to which long journeys may be made purely for the purpose of praying in them. The sacred mosque means the Ka'ba.) [2]

Imam Badruddin al-‘Aini has explained on the meaning behind this hadith. He said:

“In the hadith, it explains the virtues of these three masjids and their specialties which other masjids do not possess. They are the masjid of the Prophets PBUH. This is because al-Masjid al-Haram is the qibla for mankind. Many people circle around the Masjid al-Haram. While Masjid al-Nabawi was built on the basis of faith and taqwa, and al-Masjid al-Aqsa was the qibla of the past nations”. [3]

The virtue of al-Masjid al-Aqsa is clearly seen in the story of Isra’ and Mi’raj. It is the final destination for Prophet Muhammad PBUH before he was brought to the heavens to meet Allah SWT. Allah SWT says:

Exalted is He who took His Servant by night from al-Masjid al-Haram to al-Masjid al-Aqsa, whose surroundings We have blessed, to show him of Our signs. Indeed, He is the Hearing, the Seeing.

Some mufassirun stated that al-Masjid al-Aqsa is the second building built by Prophet Abraham AS after the Ka’aba. This is explained by Sheikh Tahir bin ‘Ashur in his tafsir: [4]

This is also based on the hadith narrated by Abu Zar RA. He once asked the Prophet PBUH:

"O Allah's Messenger (ﷺ)! Which mosque was first built on the surface of the earth?" He said, "Al- Masjid-ul-, Haram (in Mecca)." I said, "Which was built next?" He replied "The mosque of Al-Aqsa (in Jerusalem)." I said, "What was the period of construction between the two?" He said, "Forty years." He added, "Wherever (you may be, and) the prayer time becomes due, perform the prayer there, for the best thing is to do so (i.e. to offer the prayers in time). [5]

Besides, al-Masjid al-Aqsa is closely related to the history of the past prophets sent by Allah SWT. It is considered a Holy place for Muslims. Therefore, al-Quran mentions Palestine as the Holy land (al-ardh al-muqaddasah). Allah SWT says:

O my people, enter the Holy Land which Allah has assigned to you and do not turn back [from fighting in Allah's cause] and [thus] become losers."

The Holy land includes al-Masjid al-Aqsa. It is explained and described by Imam al-Tabari in his tafsir. [6]

The issue of Palestine and al-Masjid al-Aqsa is not the issue of Palestinian people only. Even, it is not an individual’s issue. It is an issue of the Muslims as a whole. It is not to be taken lightly. Since it is the third Holy place for Muslims, it should be given specific attention. The negligence of Muslims towards the issue happening in Palestine will cause the enemy to easily capture it. It is wajib for us to condemn people who try to dishonor its sanctity and take actions upon them.

May Allah save Palestine and al-Masjid al-Aqsa from the grip of Israeli Zionists. We pray to Allah to save and protect our brothers and sisters there. May Palestine be free from oppression and tyranny one day. O al-Aqsa, we are always with you!!