AL-KAFI #659: THE RULING OF ABORTING PREGNANCY FOR BUSY CAREER WOMEN 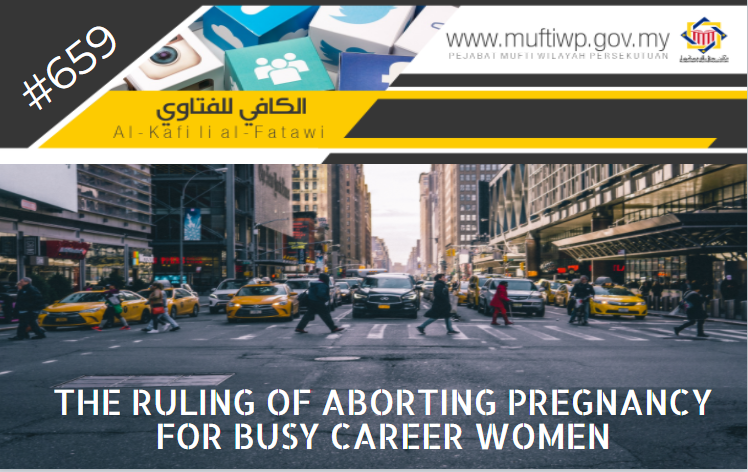 Is it permissible for women who are busy pursuing her career while having small kids under her care to abort her pregnancy of a few weeks old?

Aborting pregnancy before the foetus reaches four months old is included under matters disagreed upon by the jurists. Majority of the scholars state that its ruling is makruh. While others are of the opinion that its ruling is permissible if there are exigencies.

We are inclined to the opinion of the majority of the jurists on the prohibition of abortion of fewer than four months old. This is based on several arguments as follow:

And do not kill your children for fear of poverty. We provide for them and for you. Indeed, their killing is ever a great sin.

Imam al-Thabari rahimahullah said: This verse explains do not kill your children due to fear of poverty or scarcity. It is because the Jahili Arabs killed their children due to the fear of poverty. Then, Allah SWT gave warning to them on that matter as well as telling them that their provision and their children’s are under the care of Allah SWT. See al-Jaami’ al-Bayan ‘an Ta’wil Aayi al-Quran, Ibn Jarir al-Thabari (17/437).

Based on the context of the above verse, originally, those parents are in a comfortable situation and are not underprivileged. However, they were worried that if their children are born, it will cause poverty and scarcity in their life. Hence, Allah SWT explained that the provision of their children and even theirs’ are under the care of Allah. They need not worry about poverty which is not yet happening due to the presence of their children, hence, the prohibition of killing their children is sanctioned:

The same goes for the saying of Allah SWT:

and do not kill your children out of poverty; We will provide for you and them

Imam al-Hafiz Ibn Kathir Rahimahullah said when commenting on the verse: When Allah SWT advises to do good to parents and also grandparents, Allah also relates it to ihsan (good deeds) towards children and grandchildren. So, Allah SWT states do not kill your children due to your state of poverty. This is because they killed their children because shaytan whispers that to them. Refer Tafsir al-Quran Al-Azhim, Ibn Kathir (3/360).

Based on the above verse, it clearly has some differences with verse 31 from Surah al-Isra’ which we mentioned before. Both are Allah SWT’s prohibition upon the action of killing children, but referring to two different contexts according to the situations of the parents.

Based on both verses, it clearly shows that Allah SWT prohibits killing children due to the reason that those children will cause poverty and insufficiency or by the reason that we are poor and incapable of taking care of the welfare of our children. Both are not considered as excuses permitted by shara’.

Based on the literal meaning of the above verse, it clearly states that a man does not know more than Allah SWT the All-Knowing on what is good and what is bad for him. Perhaps, we may perceive that abortion is good and beneficial for our own relief in the future. Conversely, it may cause harm and destruction. We may perceive the presence and birth of the child will cause hardships upon us in our lives, but after he or she was born, it becomes the pleasure to our eyes, increase in provision, calmer life and many other blessings. This all is kept under the secrets of Allah SWT included in His saying: “And Allah Knows, while you know not.”

As a conclusion, we state several matters we brought in the form of points as the following:

Lastly, we pray to Allah SWT to give true understanding in religion to us all. Ameen.