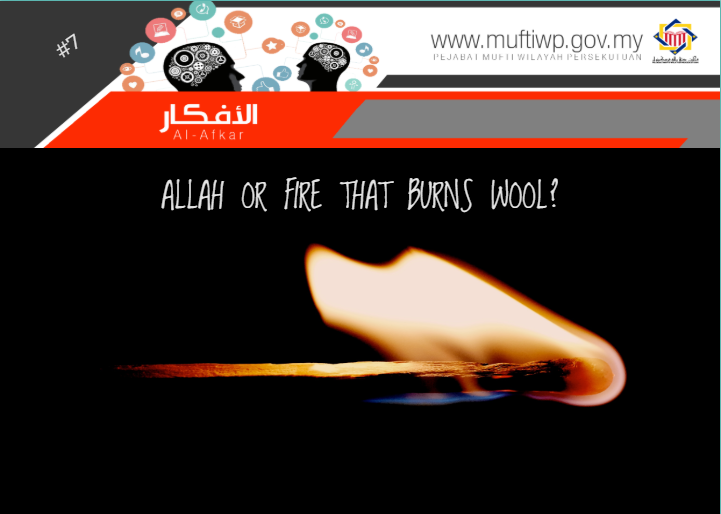 I heard a statement “Al-Ghazali said that if you put wool on fire, the wool is burnt not because of the fire, but because Allah want it to be burnt”. He states that this is irrational as it is a form of total submission to God. What is the true understanding of the concept of cause and effect?

The understanding of the concept of cause and effect is highly related to the daily activities of a normal human being. It is the basic issue in the creed of Ash’arites. Regarding this matter, those individuals may be referring to the statement of Imam al-Ghazali in his book, Tahafut al-Falasifah which stressed out that Allah is capable of doing anything. Horses are not necessarily created from semen and trees do not necessarily grow from seeds. This statement of Imam al-Ghazali should not neglect its full discussion in Tahafut al Falasifah. This matter is also discussed in the subject of Quantum Mechanics in modern science.

This matter basically is always a part of the discussion of adat (naturally occurring/custom) according to Ash’arites as discussed in al-Muqaddimat by Imam al-Sanusi:

Truthfully, either wajib (obligatory), mustahil (impossible) and mubah (permissible) in the eyes of adat, all of them is logically mubah (permissible) which is also included in the al-mumkinat to Allah SWT. Imam al-Ghazali in Tahafut al-Falasifah criticized the opinion of the philosophers who state that the relation between cause and effect is perpetual and definite. Imam al-Ghazali did not deny the cause and effect, but correcting the misconception among Muslims that anything that happens in this world is solely due to material aspects. While in fact, there are other causes behind those which are of Allah’s will (al-iradah al-qadimah) and Allah’s power (al-qudrah al-qadimah).

For example, the relation between eating and feeling full is not a certainty. This means, when a person eats, it does not necessarily mean that he will be full. Likewise, papers will not necessarily be burnt by fire and water will not necessarily make a cloth wet. All of this is just the natural law of order, but not a certainty. Everything in this world happens merely due to Allah’s will and power. Hence, when a paper is burnt due to fire, one who eats feel full and cloth becomes wet due to water, all of these is according to Allah’s will and power. The rule of cause and effect which takes place in these circumstances are not due to the natural power of a being, but sunnatullah (law of nature). The particular cause does not necessarily lead to a particular reason.

Likewise, there are conditions where there are causes and effects, but the situations change to indicate Allah’s power through the method of kun fayakun. This is clearly stated in the Quran in the story of Prophet Saleh AS’s camel which emerges from a rock, the journey of Isra’ and Mi’raj, Prophet Abraham AS who was not burnt in fire, 12 spring waters of the Prophet Moses AS, Mary (Maryam) who gave birth to the Prophet Jesus (Isa) AS being a pure virgin, the story of the men of the cave and etc. These are called mukjizat (miracles of the prophets) and karamah.

In discussing the issue of wool burnt by fire, Imam al-Ghazali brought a strong judgement to us. According to him, there are two possibilities:

The philosophers definitely refute this. They state that fire is the cause of burning due to its attribute and essence which is a non-living thing and neither have actions nor choice. Imam al-Ghazali stressed out that wool may possibly turns to ash without it coming into contact with fire due to Allah’s will. At the same time, he explained that fire is not the primary cause because if one kills another, then he throws the deceased in fire, surely, those who perceive the situation will state that the person is the one who kills him, not due to fire because fire is only a direct cause or musabbab (reason) of the killing.

The rule of cause and effect is not due to the natural power of a being but is sunnatullah (law of order). A particular cause does not necessarily lead to a particular effect.

Before stating that the tawhidic sect existed today is irrational for their total submission to Allah SWT, one should understand the concept of sabab, musabbab and musabbib al-asbab. For example, medications and therapies are the sabab, being cured is the musabbab. Will, destiny and power of Allah who heal the disease is the musabbib al-asbab.

Hence, the will of Allah is the decider whether humans’ choice is achieved or not. Allah SWT is the decider as only He know the goodness, compatibility, and effects behind humans’ choices. If it is good, suitable and brings positive effects, then Allah SWT will make it easy for it to be achieved and vice versa. It is because Allah is the All-Knowing and all-Wise God, whereas humans in making choices, they are both ignorant and unwise.

And you do not will except that Allah wills. Indeed, Allah is ever Knowing and Wise.

Placing Allah as the Main Decider for all causes is acceptable whether it is in its absolution or as an etiquette towards Him. Calamities, goodness and evils are all from Allah SWT. All is written in His qadha’ and qadar. (Refer Syarah al-‘Aqidah al-Thahawiyah, 5/51)

We may also refer to the saying of the Prophet Abraham AS in his dialogue with his nation as recorded in the Quran:

In the process of identifying the causes, one’s heart should always be attached to Allah, so these causes may lead to the outcomes intended. After one finishes his part in his effort, his heart depends on Allah while waiting for the outcomes which will then be decided by Allah. After getting the outcomes, he shows gratitude, redha or sabar in whatever Allah SWT has decided for him.

Likewise, one does not link his evil doings with Allah as a form of etiquette without denying that both good and evil are due to Allah’s will and power. Allah SWT state in the Quran:

Allah does not only create the physical matter of things, rather, all of the actions which seemingly come from the doings of the creations are truthfully also a creation of Allah. (Refer al-Iman bi al-Qadha’ wa al-Qadar, pg. 90). Imam al-Ghazali states: There is no creation that originates from other creations. [including sabab and musabab]. In fact, all of these are made apparent due to Allah’s power. (Refer al-Iqtisad fi al-I’tiqad, pg. 30)

To conclude, originally, men have the power (qudrah) although it does not give any effect, and the power or effort (kasb) will be named as second-hand power (al-qudrah al-hadithah). In the issue of effort, Imam al-Asy’ari stressed out that the effort of humans’ actions is all a creation (makhluq). Hence, he stressed out that the power of Allah is genuine, while humans’ effort is just a metaphor (majazi).

Allah is the creator of humans’ actions either good or bad, and humans are the doers (muktasib) of the actions. Imam al-Asy’ari emphasiezes that the concept of Allah’s power is that all matters either good or bad is under Allah’s will. He made the actions of humans by giving them the power to do so. (Refer al-Ibanah, 2/25).