AL-AFKAR #6: TRYING THE RITUALS OF OTHER RELIGIONS 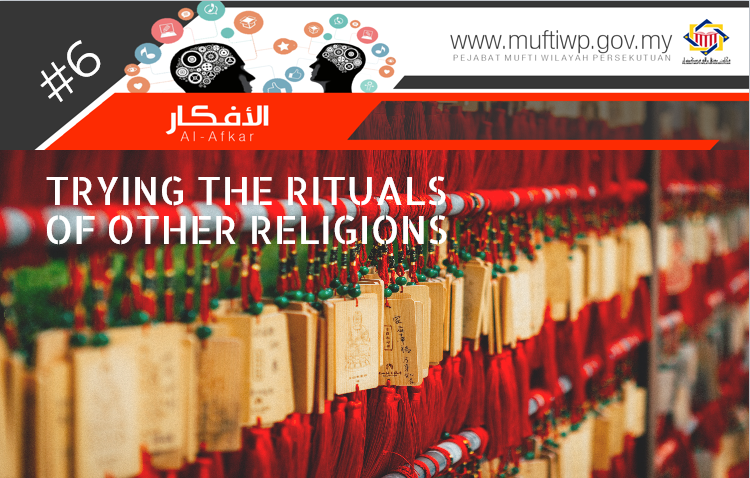 We received a video showing a woman who is trying a prayer ritual in a temple as part of a visit to the house of worship of other religion. Regardless of whether it happened in Malaysia or not, the important thing is understanding the ruling related to it for it involves the limitations of the faith of a Muslim.

The instrument used by the woman is used in fortune telling ritual. What can be observed from the video is a ritual known as kau cim. It is found in most temples everywhere around the world. It involves a person shaking a container with small bamboo sticks until one of the sticks is flung out. Fortunes are written on every stick which will then explained by an oracle. [1]

There is another instrument in the video known as Pwak Pwee. It is also known as Jiaobei which is a ritual which includes two sticks shaped like a crescent which is thrown on the ground or land, before asking for guidance from the deity and others. The answer is determined according to how the stick lands on the ground, front facing (open) or back facing (closed). When one of the sticks is open and the other close then the answer is Shi Pui which means agreement or positive. When both of the sticks are open, it means the deities are laughing, however this means a negative. When both of the sticks are close, it means the deity is angry and the answer is Ba Pui, which has a negative meaning. [2]

The Ruling of Fortunetelling

“And with Him are the keys of the unseen; none knows them except Him.”

In another verse, it is stated:

“Prohibited to you are dead animals, blood, the flesh of swine, and that which has been dedicated to other than Allah, and [those animals] killed by strangling or by a violent blow or by a head-long fall or by the goring of horns, and those from which a wild animal has eaten, except what you [are able to] slaughter [before its death], and those which are sacrificed on stone altars, and [prohibited is] that you seek decision through divining arrows. That is grave disobedience.”

According to Syeikh Mustafa al-Maraghi, the above verse regarding the prohibition of divination meant it is prohibited to ask for an unknown knowledge determined for someone based on arrows as practised by the Arabs. See Tafsir al-Maraghi, 6/52.

The same is stated in another verse:

(الْأَزْلَامُ) according to Ibnu Abbas, Mujahid, Ata’, Sa’id ibnu Jubair, al-Hasan and others said the arrow (is without a fletching and a nock) is used for divination as narrated by Ibnu Abu Hatim. See Tafsir Ibn Kathir, 3/161.

Tasyabbuh (Resembling) the Worship of Disbelievers

According to the above hadith, a Muslim is prohibited from imitating or resembling the style, action, clothing especially the religious eminence/symbol or celebration that could lead to misunderstanding of others which resemble other religions.

Imam al-San’ani Rahimahullah said, the above hadith proves that whoever imitates fasiq people, the disbelievers, or those who commit bid’ah in any matter specified to them in terms of clothing or actions in his self, then he is considered to be among them. See Subul al-Salam, 2/647.

It is also stated in another opinion that tasyabbuh (resembling) also happens internally (in one’s heart) such as i’tiqad or iradat (belief and wants) and external matters in terms of words and actions that is a form of worship or custom. See Faidh al-Qadir, 6/104.

The Ruling of Trying the Ritual of Fortune-Telling

According to the above discussion, we consider the action of the woman is included as a form of tasyabbuh (resemblance) of other religious ritual which is prohibited in Islam. Surely, there are other numerous ways which do not contradict syarak in learning and understanding the matters of other religions. However, we think that the woman does not know about its prohibition. We suggest for the public to stop spreading the video of the woman for:

At the same time, we would like to remind the Muslim ummah to try their best to avoid anything that could lead to fitnah and accusation. This in accordance with Islamic legal maxim:

“You should be careful towards matters that lead to accusations.”

This maxim is taken from the words of Saidina Umar RA:

“Whoever take the road that could lead to suspicion, then he will be accused.”

Whatever that has a risk towards fitnah should be avoided the best we could for it will have a negative impact on us whether it is in short or long term.

Hopefully, we all could contemplate on the importance of protecting and maintaining the limitations set in our aqidah in our daily lives. Wallahua’lam.