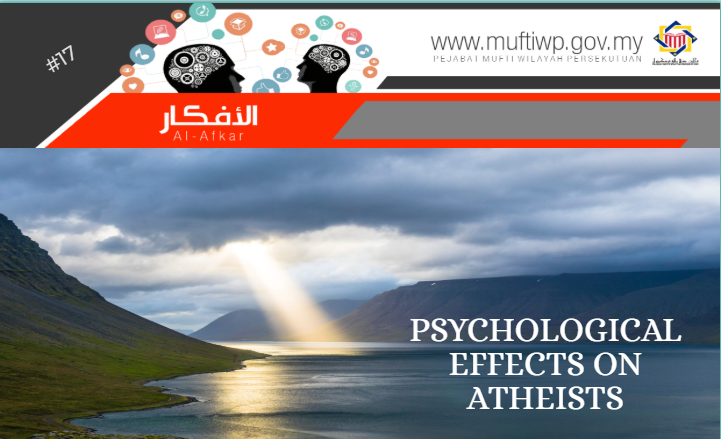 What are the worldly effects on those who do not believe in God?

It is hard to determine the number of atheists in the whole world due to differences in culture, backgrounds and they may also hide behind philosophical ideologies like Taoisme, Jainisme or known as Agnostic. In fact, some ‘remain’ as Muslims and practising the acts of worship in Islam for they consider themselves as culturally Muslims.

Living in this world that is bound with the process of cause-effect, surely it will lead to an answer of the effects towards those who do not believe in God. In a journal of Social Psychological and Personality Science, there is an article entitled Does Religion Stave Off the Grave? Religious Affiliation in One’s Obituary and Longevity. This research is not the main argument of the advantages of having religion, but it can be a support in differentiating between those with religion and otherwise.

This research focuses on the effects of religious life towards longevity. The research by academicians of Psychology from Ohio University including one from Xavier University shows that those with religion live 5.64 years longer than those who do not. It was done by referring to 1000 obituary notices from newspapers in 42 states of the United States of America. In fact, the research on 500 obituary notices in Iowa shows an increase of 6.48 years in the area, where they concluded that living in a religious area also give the same impact. [1]

We list out briefly the 16 psychological effects on individuals who do not believe in God as cited from Syeikh ‘Abd al-Rahman Habannakah al-Maidani in Kawasyif Zuyuf, pg 553-554. Not all of these attributes may affect the life of an atheist, but he may experience several or some of them in his life. Among them are:

Even if some may deny these attributes for an atheist, in truth, he will experience at least one of them especially the feeling discontentment in his life. A committed atheist will always be discontent if he does not challenge his intellect by having discussions with religious people.

If they did not get an answer that is logical, it is a sort of satisfaction for them. Lastly, they do not realize that it is merely their growing ego in their hearts.

Religious life actually gives 1001 advantages to humans, especially the religion of Islam. Religion gives humans guidance and commandment of life as well as providing answers on matters which cannot be explained by humans. Also, with religion, humans are able to differentiate the true nature of good and evil. Besides, religion also balances between two elements; physical and spiritual.

Just refer to the experiences of Yusuf Estes, Yusuf Islam, Sonny Bill Williams, Sheikh Hamza Yusuf and others. There must be great differences that they experienced and felt before and after embracing Islam. This could only be understood by those with religion.

Allah SWT state in the Quran regarding the disbelievers:

“So, whoever Allah wants to guide - He expands his breast to [contain] Islam; and whoever He wants to misguide - He makes his breast tight and constricted as though he were climbing into the sky. Thus does Allah place defilement upon those who do not believe.”

Let’s reflect upon our weaknesses together and strive to strengthen our iman and taqwa to Allah SWT.