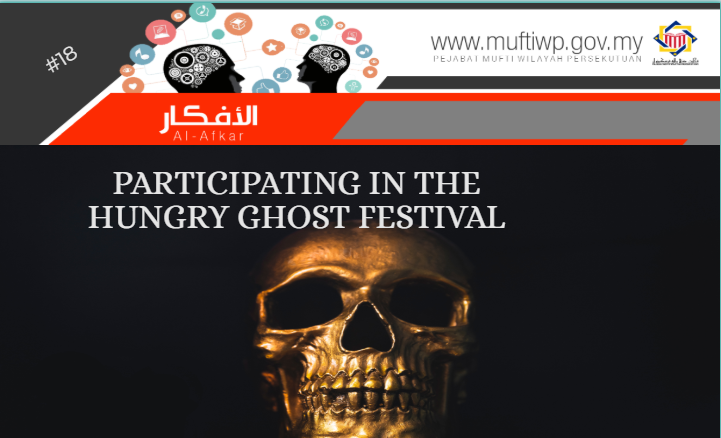 What is the ruling of participating in the Hungry Ghost Festival?

Before we go deeper into the topic of discussion, it is important for us to first know what is meant by this festivity and its origin.

The History of the Hungry Ghost Festival

According to Routledge Encyclopedia of Religious Rites, Rituals and Festivals (Religion and Society), pg. 92, this festival is known as Yulanhui or Yulanpen that falls on the 15th day of the 7th month of Buddhist calendar. For the Buddhist community, this is a safe time for wandering souls and hungry ghosts.

The history begins from the story of the mother of Maudgalyayana who hid her son’s donation to the temple who then became a hungry ghost in hell. This story is recorded in Yulanpen Sutra. Maudgalyayana beg to Buddha who came down from heaven and opened the gate of hell. Buddha announced that for each year on the 15th of the 7th month, hungry ghosts will be permitted to eat. This festival is very similar to Yulanhui Festival in China, Bon Festival in Japan and Avalamba Festival in India.

It is also very much the same to festivities in Taoism. In Malaysia, it is celebrated in syncretism by the Chinese community who combine the ideologies of Buddha and Taoism.

Participating in the Hungry Ghost Festival

After analyzing the history and beliefs of this festival, we are of the opinion that there is no need for Muslims to attend it. This is because, it is closely related to their aqeedah and belief. The prohibition is in accordance with Allah SWT’s saying in the Quran:

“And [they are] those who do not testify to falsehood, and when they pass near ill speech, they pass by with dignity.”

The meaning of al-zur according to Ibn Kathir is the festivities of the disbelievers. Refer Tafsir al-Qur’an al-‘Azim, 6/130. At the same time, we should respect their beliefs and festivities and should never insult them.

“And do not insult those they invoke other than Allah, lest they insult Allah in enmity without knowledge. Thus We have made pleasing to every community their deeds. Then to their Lord is their return, and He will inform them about what they used to do.”

For those where it is necessary for them to attend the festival for the purpose of learning, it is permitted on the condition of not being involved in any of the religious ritual. While for those who attend it with the purpose of officiating it, our advice is to delegate the responsibility to his deputy or another persons who he deemed as suitable from among the non-Muslims.

We agree with the Guidelines of Muslim Celebrating Religious Festivities of the non-Muslims set by the Department of Islamic Development Malaysia (JAKIM). The guidelines list out certain conditions as follows:

May we always strive to be His slave who preserves his religion while at the same time acknowledging the plurality of Malaysia which we are blessed with today in accordance with the framework of fiqh al-ta’ayusy (co-existence).