AL-AFKAR #25: GOD IS ALL LOVING BUT STILL PERMITS MISHAPS AND CALAMITIES? 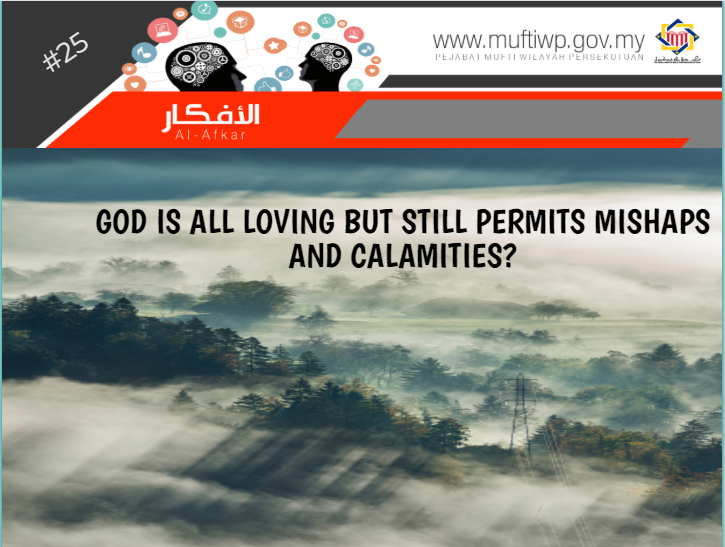 Lately, there are multitudes of news on my newsfeed showing pictures of people and children who are starving and malnourished, now left with just skin and bones. Barely surviving, they continue on living while suffering. This greatly saddens me and I thought, where is God? Is God too busy with other matters? Is this world too big and humans too many that God is unable to manage them all?

The discussion regarding the problem of evil and suffering is not a new issue to be discussed. In philosophical discussion, this issue has been discussed as early as the statement made by Plato in his book The Republic: “since god is good, he is not – as most people claim – the cause of everything that happens to human beings but of only a few things, for good things are fewer than bad ones in our lives. He alone is responsible for the good things, but we must find some other cause for the bad ones, not god.”

Allah SWT could always just create humans with only a single way of thought, lifestyle, skin color, character and others but he decided to create us different and diverse for there are many wisdoms in it.

“And if your Lord had willed, He could have made mankind one community; but they will not cease to differ.”

We would like to answer the above question by stating we are taught to worship, surrender and submit ourselves to Allah SWT where it is a certainty that we will be held accountable for everything that we do, and not the other way around. Allah SWT state:

According to Dr Sami Ghamiri in Musykilat al-Syarr wa Wujud al-Ilah (pg. 20-21), the discussion regarding The Issue of Evil can be found in the discussion of theodicy in philosophy which originates from the word theos (God) and dike (justice). Thus, it means “God’s justice” or specifically, it is an explanation of why God who is the All Perfect, All Mighty and All-Knowing permits evil to happen. The word theodicy is first discovered in literature of Leibniz in his book Theodicy: Essays on the Goodness of God, the Freedom of Man, and the Origin of Evil.

This issue is discussed under the chapter of the justice of Allah SWT, particularly explaining the existence of evil in this world without denying the existence of Allah SWT. It can also be found discussed in kalam knowledge under various chapters such as Allah’s attributes, the Will of Allah, the actions of slaves. According to Muktazilah, this issue can be found discussed under the chapter al-qabih.

Among the issues raised are:

God is All Loving but Still Permit Evil?

“Women are raped every day, young children die of cancer, murder and war are everywhere. Why wouldn’t God act? Thus, He does not exist or are not acting as the true God!”

These statements are often times heard from atheists and agnostics compromising the concept of faith and believe to God. For those who made thorough researches, they will find various previous scholars who have answered these questions such as Imam al-Taftazani, Imam al-Baqillani, Imam al-Ghazali and others. The same goes for contemporary scholars such as Hamza Tzortzis, Asadullah Ali, Syeikh Muhammad el-Shinawy, and also non-Muslim scholar such as Alvin Plantinga with the theory of Free Will Defence.

First: According to the Quran, among the name of Allah SWT is al-Qadir (All Mighty), al-Muntaqim (The Avenger) and al-Rahman (All Loving). However, atheists have misinterpreted the comprehensive concept of God. Allah SWT is not only the All Loving. In truth, He has other names that should be understood holistically for they are interrelated.

For example, His name al-Hakim (All Wise). His actions are in line with His wisdom. This is what is known as wisdom. Thus, whatever happens, there is wisdom behind it which is good for us. Unfortunately, atheists and agnostics are trying to shake the faith of Muslims by only looking at the attribute of Allah SWT which is All Loving and All Merciful. Hence, they made it seemed as though Allah SWT is not playing His role which ultimately denying the existence of Allah SWT.

If Allah SWT only act according to some of His attribute and not the other, then His Perfection is incomplete. The same goes if He only acts according to what His slaves wishes Him to be, then His function as the All Mighty over every single thing is lost.

Second: Imam al-Ghazali in al-Maqsad al-Asna fi Sharh al-Asma’ al-Husna state if there is no evil in existence, then there is no goodness in it. Furthermore, if evil is removed, goodness will also disappear resulting in a greater harm.

He gave the example of cutting off a limb. It is a form of harm but it is a form of good if it is done in order to protect one’s health or life. If a person who needs to be amputated but is left alone, then possibly this would cause harm to his whole body. (See al-Maqsad al-Asna, pg. 65)

Third: Blaming Allah SWT came from some people who are running away from their own responsibilities and role as the caliph of this world. If analysed, almost all tests, tribulations, sufferings and cruelty that happens on earth are a result from the hands of humans themselves.

The attitude of blaming others or situations is caused by the difference of times that exists between the millennials (born as early as 1980) with the baby boomers (1946 - 1964) among them in terms of careers. Study shows millennials are prone to getting fired or laid off for they like to work according to their interests to develop their skills and experience suitable with their career prospects. However, the baby boomers prefer to work hard in certain companies as a form of long-term investment to develop their skills and security for there is pension. [1]

With this type of attitude by the millennials, they are inclined to blame their situation and others which they consider as what is preventing them from attaining contentment in their careers and lives, that they ultimately blame God. Thus, it is not impossible if there is any problem or tribulation, God will be blamed for any calamity that befall them.

Fourth: There are too many verses of the Quran that commanded us to do good and avoid evil or bad deeds. If Allah SWT loves goodness and at the same time “don’t do anything” against evil, then this contradicts His own commandment and injunctions which is impossible for God.

“And whatever the Messenger has given you - take; and what he has forbidden you - refrain from. And fear Allah,”

When Allah SWT permit evil, suffering and cruelty to happen, it does not mean that He is not playing His role or too “busy” as questioned, for permitting does not mean redha (happy) and permitting also does not comes with redha. Al-Kafawi in al-Kulliyat defined permit as making it permissible to happen, while redha means pleased with something. (See al-Kulliyyat, pg. 72 & 76)

Misunderstanding of the Atheists and Agnostics

From Abu Hurairah RA, he said, the Prophet PBUH said:

“The world is a prison-house for a believer and Paradise for a non-believer.”

Imam al-Nawawi said the meaning of the hadith is that every mukmin (believer) is imprisoned and impeded in their lives in this world from their desires which are prohibited or makruh (undesirable). A mukallaf mukmin is also commanded to follow all the injunctions and commandments set on him. However, when he dies, he is free from all of these and will be able to rest. And everything will change, as promised by Allah SWT to him of everlasting blessings and true rest without any deterioration. As for the disbelievers, they will have what they did in this world which is limited, vague and incomplete. When he dies, he will be punished forever and be in everlasting misery. (See al-Minhaj, 93/18)

Imam al-Munawi commented on the above hadith in Faid al-Qadir (3/546), where he included a story he heard from scholars: “When al-Hafiz Ibn Hajar (al-Asqalani) is the Chief Judge, one day, he was passing through a market. At the time he was with a luxurious group of people riding amazing and beautiful animal mounts. Suddenly, a Jew man who is a hemp seed oil seller rushed and approached him. His clothes are dirty, old and tattered.

He held the rope holding the mule of Imam Ibn Hajar and said: “O Syeikh al-Islam! You claimed that your prophet said: This world is like a prison for the believers and like paradise for the disbelievers” Then, what prison are you in right now and where is the paradise I am in?” Ibn Hajar replied: “If I would compare what Allah SWT promised for me in the hereafter from the blessings of paradise, it is as if I am in prison right now. And for you, compared to what is promised for you in the hereafter, then it is as if you are in paradise right now.” Afterwards the Jew become a Muslim.

Regarding responsibility, Imam al-Marwazi once said: I once asked Imam Ahmad: “How are you today?” He answered: “How is it the position of a slave in the morning, where his Rabb is asking from him to fulfil all sorts of obligations on him, his prophet is asking him to follow al-Sunnah, while the two angels demand him to perform worship and be truthful, on the other side, his soul is asking him to follow his desires and iblis is whispering to him of transgressions and sin, while the angel of death is looking after him closely to take his life at the same time his family is asking from him sustenance.”

This issue, need an explanation and understanding regarding the concept of the will (masyi’ah) of Allah SWT, the same as the concept of iradah syar’iyyah and iradah kauniyyah. Ironically, those who are actually facing tests or tribulations are those who believe in God and are getting closer to Him. They believe with the statement of Allah SWT:

Atheists and agnostics try to confuse the Muslim ummah by claiming that only tribulations are considered as tests. However, in truth they forget that ease and goodness is also a form of a test from Allah SWT. Allah SWT state:

“Every soul will taste death. And We test you with evil and with good as trial; and to Us you will be returned.”

May Allah SWT give us the right understanding in His religion and increase our faith in Him. Wallahua’lam.