AL-AFKAR #27: THE ORDER OF THE BEST OF CREATIONS 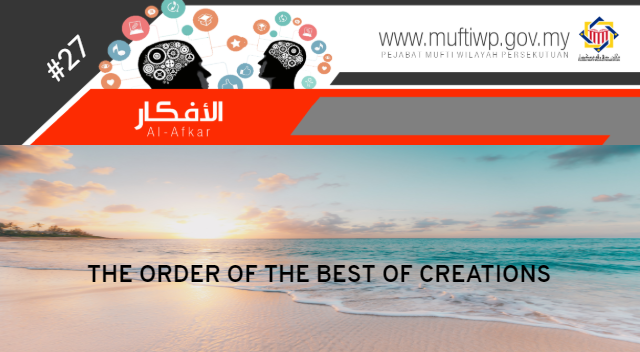 What is the order of the best of creations of Allah SWT?

Before we answer the question, we would like to emphasize that it has been agreed by scholars that the Prophet PBUH is the best of all the creations of Allah SWT. Imam al-Bajuri said:

“And the absolute best of all creations * Is our Prophet PBUH, then avoid any difference (in this issue).”

However, Imam al-Zamakhsyari has a different opinion in this issue. He is certain that Jibril alahissalam is a greater creation than the Prophet PBUH. (See al-Kasysyaf, 4/712)

Regarding the priority between angels and humans (the prophets, believers and the pious), the scholars have differing opinions about it. This is recognized by scholars such as Imam Ibn Kathir. (See al-Bidayah wa al-Nihayah, 1/58). They have several opinions regarding this matter and we simplify their opinions into two main opinions:

This is the opinion of Mu’tazilah and the opinion of scholars from Ahli Sunnah wal Jama’ah such as al-Qadhi Abu Bakr al-Baqillani and Imam Fakhruddin al-Razi and some Islam philosophers.

At the same time, the scholars have agreed that the primary angels such as Jibril, Mika’il, israfil and Izrai’l is prioritized than ordinary humans. This is stated by Imam Sa’duddin al-Taftazani in Syarah al-Aqa’id al-Nasafiyyah.

There are however, some scholars who refuse to conclude this matter. We are inclined towards the opinion that states that humans are prioritized compared to angels.

The scholars have listed the order of the best of creations as the following:

However, according to Imam Tajuddin al-Subki, it is not an obligation to hold the opinion that humans are prioritized than angels. Furthermore, even if a person faces Allah SWT in the hereafter while being unaware of this issue, it is not considered as a sin. The safest option for us is to not voice our opinion on this issue. (See Mukhtasar al-Mufid fi Sharh Jauharah al-Tauhid, pg. 135).

Thus, we conclude that there is an order of the best of creations of Allah SWT, however, it is not the main issue in aqidah but just a branch of it.