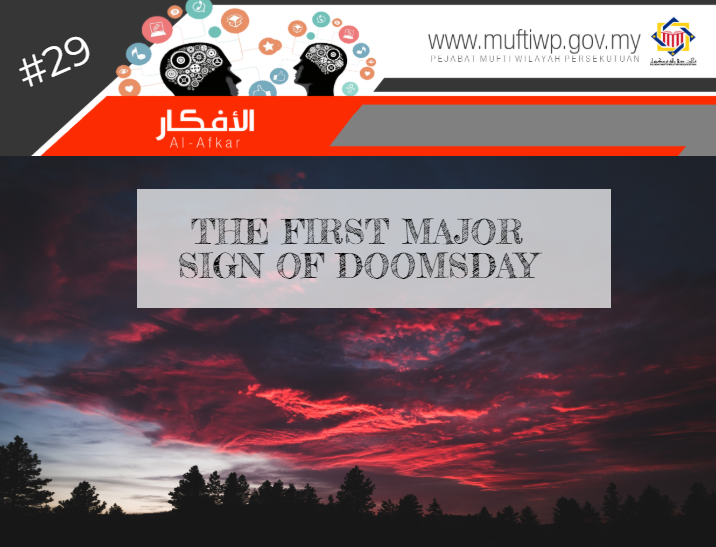 Assalamualaikum w.b.t. Can you explain what is the first major sign of the doomsday?

In answering this issue, we cite from the book Asyrat al-Sa’ah by Dr Yusuf bin Abdullah bin Yusuf al-Wabil which stated: “Imam Ahmad and Imam Muslim narrate a hadith from Abi Zur’ah which says:

There were three groups of Muslims who came to meet Marwan bin al-Hakam in Medina, then they heard that he was telling about the last signs of doomsday by saying that the first sign is the appearance of Dajjal. Then, Abdullah ibn ‘Amr R.Anhuma said, Marwan did not say anything. Verily, I memorize a hadith of the Prophet PBUH in which I never forget. I heard he said:

According to the narration of Ahmad, he added: And Abdullah said that while reading the book and I am of the opinion that the first sign would be the rise of the sun from the west.

The wisdom is, when the sun rises from the west, the door of repentance is closed, then there is the emergence of Dabbatul Ard of which its emergence is to distinguish between mukmin and kafir as the completion of the closing of the door of repentance. While the first sign is the fire which gathers all humans. (See Fath al-Bari, 11/353)

Al-Hafiz Ibn Katir is of the opinion that the emergence of the animals from the centre of the earth is the first major sign of the doomsday. Wallahua’lam.

The final and strong opinion is the opinion of al-Hafiz Ibn Hajar which is the appearance of Dajjal.

We believe in the unseen including in the hereafter. May Allah make us firm in this faith to the end of our breath.