AL-AFKAR #31: IS IT POSSIBLE FOR THE SOUL OF A DECEASED TO RETURN HOME? 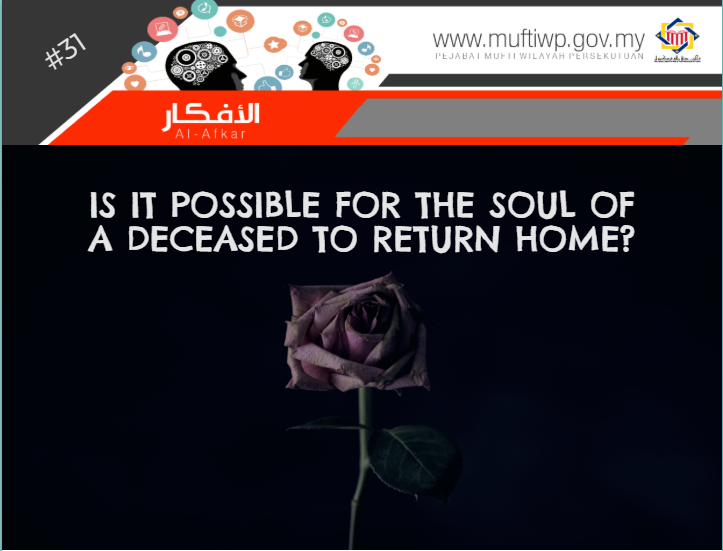 Assalamualaikum SS Dato’ Seri Mufti, my question is, if the soul of my deceased husband return home, can I feel his presence?

Soul is a conscience matter, a type of light that lives and moves in a way that transcends our knowledge. Its nature is different from matter that can be perceived by our senses, for matter usually moves and travels inside the body the same way as water flows inside the stem of a rose, oil inside olive and fire in a burning coal.

Conscience matter (soul) is irreplaceable, inseparable and unbreakable, and even breathes life to all parts of the body as long as the body still deserves to receive its light and there is nothing that hinders it. Without it, the body will be dead. This is the chosen opinion of al-Razi and Ibn al-Qayyim in his renown book, al-Ruh (The Soul).

Ruh is not a physical matter. It acts as a guide and regulator of the body. This is the opinion of hujjatul Islam, Imam al-Ghazali and Abu Qasim al-Raghib al-Asfahani. (See Tafsir al-Maraghi, 8/4020)

Syeikh Abdul Rahman al-Sa’di in his commentary, Taysir al-Karim al-Rahman, states: This verse explains the weakness of humans, where certain matters are just beyond their knowledge and understanding. Hence, Allah SWT commanded the Prophet PBUH to answer the question regarding ruh by leaving the matters to Allah SWT.

Allah takes the souls at the time of their death, and those that do not die [He takes] during their sleep. Then He keeps those for which He has decreed death and releases the others for a specified term. Indeed, in that are signs for a people who give thought.”

There are two opinions from the commentary scholars regarding the above verse. One of it states, the soul of the deceased is held back, so that it shall not return to its body in this world. While the souls that are released are those of the living. (See al-Ruh by Ibn al-Qayyim, pg. 3)

It is narrated from Ibn Abbas R.Anhuma, he explained the above verse in his commentary saying:

Indeed, the souls of the living and the dead meet in dreams. They recognize each other as willed by Allah. When each intends to return to its body, Allah hold the soul of the deceased by His side and release the souls of the living. (See Jami' al-Bayan fi Ta'wil al-Qur'an, 21/298; al-Jami' li Ahkam al-Quran, 15/260; Madarik al-Tanzil wa Haqa'iq al-Ta'wil, 4/56 and Zad al-Masir by Ibn al-Jauzi 4/20)

“Indeed, Allah SWT hold the souls of the deceased and the souls of the living when they are asleep. They meet and get acquainted with each other according to Allah’s will.” (See al-Jami' li Ahkam al-Quran, 15/260)

Answering the above question, it is clear to us that the soul can never return after death. However, if someone spends a lifetime together, such as husband and wife, living together in happiness and harmony and always going to the mosque together for every prayer. When either of them passes away, and the practise of going to the mosque is continued, it is felt as though the other is still with them in the present. This happens because of the love and nostalgic feelings they experienced being reminded of when they used to be together.

Our advice for those who are still alive, whenever he is reminded of the person who has passed away, he should always supplicate for the person. May Allah SWT place us and those who passed away earlier than us among the prophets, siddiqin, syuhada’ and solehin. Amin.