AL-AFKAR #32: THE DIFFERENCE BETWEEN AL-MASIH (MESSIAH) WHEN DESCRIBING THE PROPHET JESUS AS AND DAJJAL (ANTICHRIST) 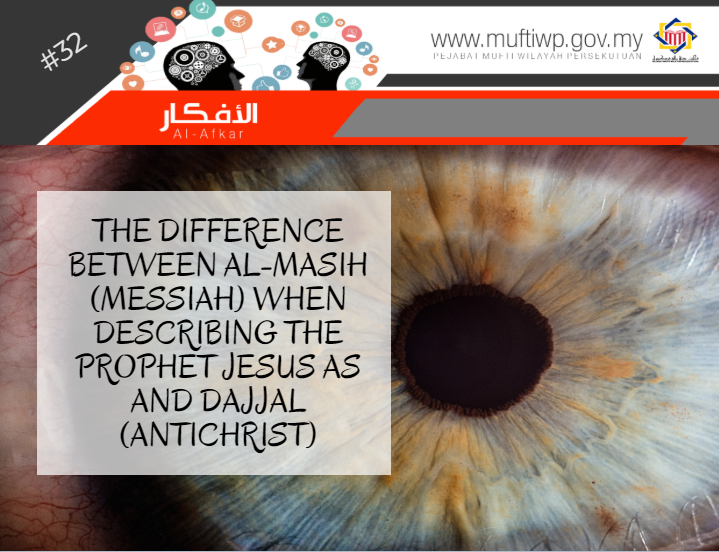 Assalamualaikum WBT SS Dato’ Seri Mufti. I want to ask, what is the difference between the word al-Masih which is used to describe the Prophet Jesus AS and al-Masih Dajjal? Hope for an explanation. Thank you.

The Meaning of al-Masih for the Prophet Jesus AS

“[And mention] when the angels said, "O Mary, indeed Allah gives you good tidings of a word from Him, whose name will be the Messiah, Jesus, the son of Mary - distinguished in this world and the Hereafter and among those brought near [to Allah].”

Ibn Kathir in commenting the above statement of Allah SWT: “اسْمُهُ الْمَسِيحُ عِيسَى ابْنُ مَرْيَمَ” (whose name will be the Messiah, Jesus, the son of Mary) explains that the name of the child will be renown in this world and by the believers. He is named as al-Masih (Messiah), according to some scholars because the Prophet Jesus AS travels a lot. Some said, he is named as such because the Prophet Jesus AS has flat feet. Others state the reason is, when he strokes the head of a chronically ill patient, by the will of Allah SWT, the patient will be cured. (See Tafsir al-Quran al-‘Azim, 2/60)

“Jesus AS is named as al-Masih (Messiah) because he always travels the earth and he never stays in one place.” (See Lisan al-‘Arab, 2/593)

“The Prophet Jesus AS is called as al-Masih (Messiah) because when he strokes his hands on a patient, a blind person from birth, a patient suffering from leprosy, then all of them are cured by the will of Allah SWT.” (See Lisan al-‘Arab, 2/593)

The Meaning of al-Masih for Dajjal (Antichrist)

The word al-Masih is used to describe the dajjal (antichrist) in a hadith of the Prophet PBUH, where he mentions the recitation of seeking refuge from the four things in the last tasyahhud. From Abu Hurairah RA, the Prophet PBUH said:

“When anyone of you utters tashahhud (in prayer) he must seek refuge with Allah from four (trials) and should thus say:”

“Dajjal is called Masih, for he does not have one of his eyes. And al-Masih: is someone whose one side of his face is mamsuh (excluded), without an eye and eyebrow.” (See Jami’ al-Usul fi Ahadith al-Rasul, 4/203)

Thus, according to the above statement, there is a clear difference between the word al-Masih when used to describe either the Prophet Jesus AS or Dajjal (Antichrist).

We analyse the word al-Masih further and it is used as the bringer of goodness and truth. Consequently, it is also used for the bringer of evil and deviance. Allah SWT has stated these numerous times in the Quran and also the hadith where a just, wise and powerful judge and ruler such as the Prophet Solomon. The same is stated for a tyrannical ruler who claimed himself as god such as the pharaoh. All of this teaches us to choose only what is good and avoid and distance ourselves from evil.

What’s interesting is, both al-Masih (Messiahs) will appear at the end of times. The honoured al-Masih Jesus AS will descend from the sky as stated in authentic hadiths. While al-Masih al-Dajjal will emerge from the earth bringing about sorcery and falsehood with him, and ultimately al-Masih will kill al-Masih, which means al-Masih Jesus AS will destroy and kill al-Masih al-Dajjal. It is a sign of the might of Allah SWT where the truth will defeat falsehood.

Insya Allah, we will publish Bayan Linnas article specifically discussing al-Dajjal in the near future.

May Allah SWT save us all from the harm and fitnah of al-Masih al-Dajjal. Amin.