AL-AFKAR #36: ARE CRESCENT AND STAR THE SYMBOLS OF ISLAM? 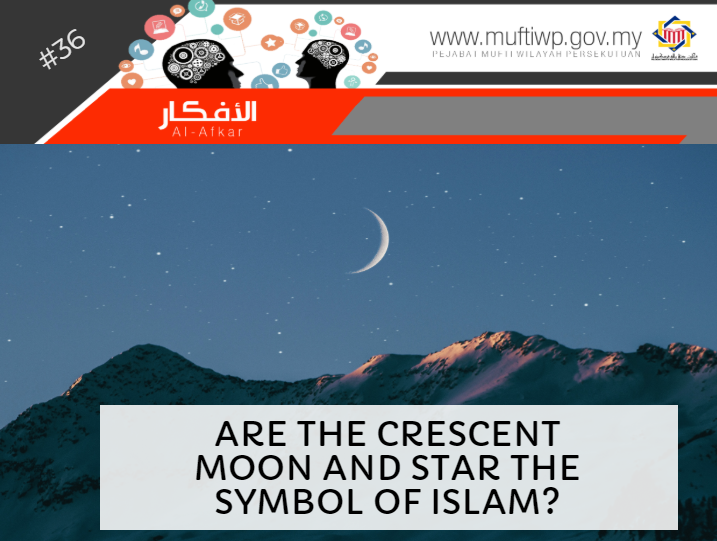 I would like to ask. Are crescent and star the official symbol of Islam? Most mosques or surau in Malaysia use this symbol on top of the dome. Even the flag of Malaysia also has this symbol which means Islam as the official religion of the country. Hope for an explanation from ustaz. Thank you.

It is widely known and famous that the architecture of mosques in Malaysia will include the symbol of crescent and star on top of the dome or the minaret. This also includes the construction of mosques in other Islamic countries. In fact, buildings in the two Holy Lands Mecca and Medina also use this symbol. It is something significant with Islam. In Arabic, the crescent is Hilal (هلال) while the star is Najm (النَّجْم). Even in the Quran, there is a specific surah on stars while there are some verses which mentioned the crescent. However, the symbol of crescent and star are not stated in the Quran as the official symbol of Islam.

Originally, Philip II of Macedon (he is the king of Macedon or Macedonia which is now known as Greece that lived in 359 BC and was killed in 336 BC). He is the father of Alexander the Great or Alexander III of Macedon or Iskandar Zulkarnayn. When he attacked the Byzantium Empire which is the City of Constantinople (one of the cities ruled by Byzantium) with his army, after several nights, they were then able to overrule and chase away the army of Byzantium from the city. The event took place predawn. They choose crescent as the official symbol, source of strength and reminder of the event. Then, this symbol was used in the castles. Then, the Ottoman empire overtook them and this symbol entered the country of Qazan (now is known as Russia).

In answering the question asked, are crescent and star the official symbol of Islam? The answer is there is no such official symbol for this religion of Islam like crescent, star or etc. In fact, this matter is discussed by Sheikh Muhammad Abdul al-Hayy al-Kattani in his book where he states that:

Putting the pictures of a crescent on top of the minaret is a new doing in the religion (bida’ah), but was used by the Ottoman empire as the official symbol taken from the castles in Rome. (Refer Nizam al-Hukumah al-Nabawiah @ al-Taratib al-Idariah, chapter 1, pg 265).

However, al-Imam Ibn Hajar al-Asqalani in his book al-Isabah fi Tamyiz as-Sahabah states a hadith which mentions a flag which contains the symbol of crescent:

“Saad bin Malik bin al-Aqsyar bin Malik bin Qari’ bin Zuhail bin Dail bin Malik al-Azdi Abu al-Kanud told that he once met the Prophet PBUH. Then, the Prophet PBUH put a flag for him to deliver to his people. It was black and there is a white crescent. It can be seen during the opening of Egypt, as narrated by Qasim bin Abi Kanud, from the narration of Said Afir from Amru bin Zahir bin Asmar bin Abi Kanud who met and remembered him.”

This narration indicates that since the time of the Prophet PBUH, the usage of crescent as the symbol of Islam has already exist. However, this narration is criticized by the scholars as a narration that is not sahih because it is mu’dhal (that there are two narrators or more missing from the sanad consecutively either it is at the beginning or end of the sanad) and cannot be made as an argument.

Answering the question on flags like the flag of Malaysia which has a crescent and star to represent Islam as the official religion, we are of the opinion that it is a gazette by the government as the symbol of Islam as the official religion of Malaysia. However, it is never used on the flag of the Prophet PBUH. According to the book of Fathul Bari written by al-Imam Ibn Hajar al-Asqalani, he states that:

“The flag of the Prophet PBUH is written with the articles of faith.”

The conclusion of this issue is, the usage of symbol for something to ease or identify something. The same for other religion like Christians who use cross as their symbol and Jews who use star as the symbol of their religion. In fact, in Islam, the symbol of crescent and star are the significant symbol for Islam.

(This hadith is evaluated as hassan mawquf; its sanad only reaches to the Companions and not to the Prophet PBUH) by the scholars like Imam al-Zurqani in his book al-Mukhtasar. This hadith can be practiced and used as an argument.

Still, it is never considered as a symbol which is worshipped or represents Allah SWT or said as the same as crescent and star. In fact, Allah SWT is the God of crescent, star and all other creations.

Using the symbol is not something that contradicts the religion, and even an accepted and decided ‘urf (custom). For example, Imam al-Bujairimi Rahimahullah cited in the book Tuhfah al-Habib (chapter 4, pg. 366) in the issue of paying kaffarah by giving the cloth of Tayalisah: “And due to the usage of Tayalisah nowadays, it is no longer a symbol or eminence (for Christians and Jews). In fact, it is already lifted on these current days and become one of the permissible general items.” The same for what is stated by Ibn Abd al-Salam on the permissible bid’ah. (Refer Irsyad al-Fatwa Series 237: The Ruling of Hair Styling and Taking Obligatory Bath with Dreadlock Hair).