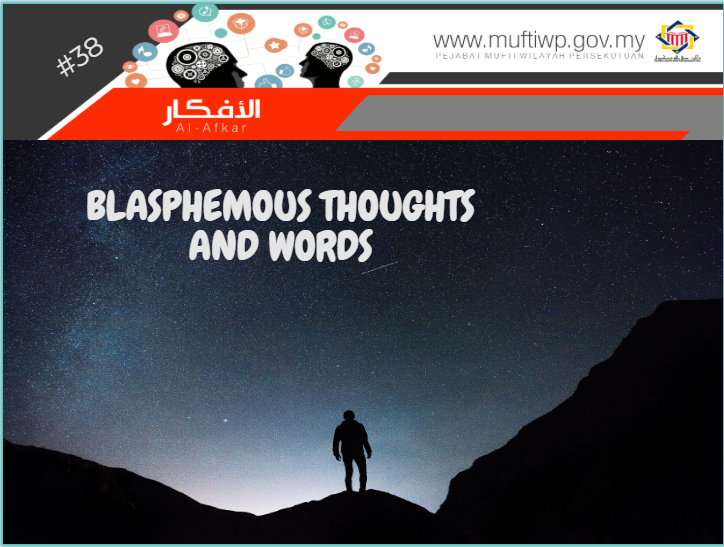 Assalamualaikum SS Mufti, I would like to ask a question that has been worrying me for the past two days. I just awoke from my sleep, had an argument with my mother, then I took a bath. While showering, my thoughts got so messed up that I questioned the existence of Allah SWT. I even accidentally said, “Am I an atheist?’ many times. Is this considered as blasphemy? I hope that you may answer this question. I am currently extremely worried about this matter.

It should be known that the fundamental principle of belief is that it is obligatory for us to have faith. It is prohibited for us to have even the slightest syak, waham and zan on this matter. Syak can be said as a medium level of doubt between believing and not. Meanwhile, waham does not reach even half of it. Zan is apparently a high level of belief, almost reaching to the level of yaqin (certainty), but still does not reach the ultimate belief.

All sorts of doubts are unacceptable in having faith and able to jeopardize one’s belief. However, one cannot easily be free from bad thoughts and the whispers of shaytan that contradict with the faith. More often than not, they come without notice and with no intention beforehand. For example, a scientist who do a lot of researches on the origin of the universe. Sometimes, there comes a thought in his heart questioning on who is the creator of the universe?

In this scenario, if the doubt comes from mere disturbed thoughts or the whispers of shaytan, then it does not invalidate one’s faith as long as he is not affected. The Prophet PBUH says:

"Allah has accepted my invocation to forgive what whispers in the hearts of my followers, unless they put it to action or utter it."

Imam Nawawi states that inner thoughts, if they are not fixed, then the person is forgiven by Allah SWT according to what has been agreed by the scholars. This is because, a person is of no choice when this happens, and there is no way out. Imam Nawawi also highlights that as long as these thoughts are not fixed (like blasphemous thoughts or other bad thoughts) and quickly avoided, then it is considered that particular person has not committed blasphemy. Hence, nothing will be imposed upon him. (Refer al-Azkar, 273)

In the situation of the questioner, he accidentally utter words of blasphemy (I’m Atheist) in his troubled mind and is confused with doubts. Thus, it is in the category of false, error and is without intention because his heart is not fixed (istiqrar) with the intention of blasphemy. This is in accordance with the saying of al-Quran:

“…And there is no blame upon you for that in which you have erred but [only for] what your hearts intended. And ever is Allah Forgiving and Merciful.”

Just as the saying of the Prophet PBUH:

“Allah has forgiven for me my nation their mistakes and forgetfulness, and what they are forced to do."

However, we would like to advise those who face this situation to ask for forgiveness from Allah SWT through istighfar and renewing the articles of faith. This aligns with the hadith stating the importance of renewing one’s faith. The Prophet PBUH says:

“Renew your faith! (The companions) asked: O the Messenger of Allah! How do we renew our faith? The Prophet PBUH replied: Increase in saying la Ilaaha Illallah”

Lastly, here we state some tips on overcoming doubt (waswas) in belief.

First: Calm down and stop worrying. This is because, our agitation and restlessness in our doubt is a sign that we still have a firm faith. In a valid hadith narrated by Abu Hurairah RA, he said:

Some people from amongst the Companions of the Apostle (ﷺ) came to him and said: Verily, we perceive in our minds that which every one of us considers it too grave to express. He (the Holy Prophet) said: Do you really perceive it? They said: Yes. Upon this he remarked: That is the faith manifest.

Second: Fortify our faith by repeating the articles of faith. In a hadith narrated by Abu Hurairah, the Prophet PBUH said:

“Men will continue to question one another till this is propounded: Allah created all things but who created Allah? He who found himself confronted with such a situation should say: I affirm my faith in Allah.”

Third: Seek refuge in Allah from the whispers of shaytan, at least by saying ta’awwuz (أعوذ بالله من الشيطان الرجيم). In another narration of Abu Hurairah, it is said that shaytan comes to a person and questions who creates your God? When this question arises, seek refuge in Allah and stop (considering the thought). Refer Sahih Muslim (214).

Fourth: Quickly stop ourselves from continuing the thought. Instead, busy yourself with doing good deeds while contemplating on this saying of Allah SWT in the Quran:

Fifth: Reciting supplications and dhikr to be firm in religion and obedience. Among them is the supplication of the Prophet PBUH: (اللهم يا مُقَلِّبَ الْقُلُوبِ ثَبِّتْ قَلْبِي على دِينِكَ) which means: “O Changer of the hearts, make my heart firm upon Your religion”. Narrated by al-Hakim in Mustadrak (1926)

Sixth: Learning ‘ilm al-aqidah face-to-face (talaqqi) by finding a trusted and qualified teacher in fortifying our faith especially when facing some doubts intentionally raised by the enemies of Islam.

Seventh: Always mingle around scholars and the righteous people.