AL-AFKAR #41: THE RULING FOR A MUSLIM JOKING BY SAYING “I AM NOT A MUSLIM” 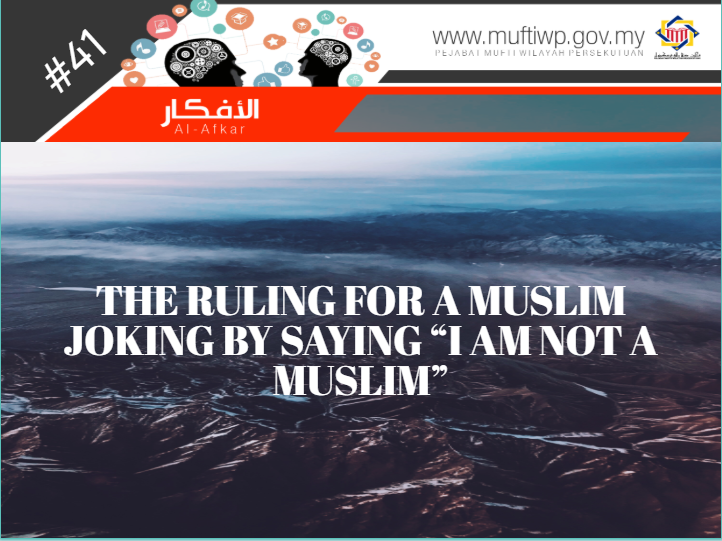 Assalamualaikum. What is the ruling if a Muslim casually writes (through Whatsapp, messenger and other methods), stating that he is not a Muslim with the intention of hiding which religion he is in to others (especially towards the non-Muslims)? He then realized that his joke may affect his faith. If he is considered as apostate, what shall he do? Does he need eyewitnesses for him to say his syahadah again?

Literally, murtad or riddah is isim masdar of the word اِرْتَدَّ يَرْتَدُّ اِرْتِدَادًا which means divert from something to another. Murtad is diverting from Islam to other religions or beliefs.

Syeikh Ahmad Ibn Faris al-Qazwini in his book Mu’jam Maqayis al-Lughah (2/386) states that the original word of murtad or riddah is a combination of letters ra’ and dal, which means returning to something. By this basis, murtad is defined as a person returning back to blasphemy.

Joking or casually uttering “I am not a Muslim” is one of the acts of making fun of religion. For a better exposure, hereby we bring upon a situation as an example to help our understanding:

During Ramadhan, Aziz Rusydi intentionally does not fast and eat in front of the people. Then, his friend rebukes him for it. He then calmly replies, “I am not a Muslim”, then laughs.

Fasting is an ibadah and an obligatory commandment for every Muslim. If we see upon the example, he utters ‘I am not a Muslim’ for fun. Indirectly, it is considered as an act of making fun of religion.

Hence, what is the position of those who make fun of religion in the eyes of Allah SWT?

And if you ask them, they will surely say, "We were only conversing and playing." Say, "Is it Allah and His verses and His Messenger that you were mocking?". Make no excuse; you have disbelieved after your belief. If We pardon one faction of you - We will punish another faction because they were criminals.

In fact, Allah SWT commands us to stay away from those people. Allah SWT states:

“And leave those who take their religion as amusement and diversion and whom the worldly life has deluded.”

The act of making fun of religion is one of the greatest sins and is pledged with horrendous torture of hellfire. Allah SWT states:

“Those are the ones who are given to destruction for what they have earned. For them will be a drink of scalding water and a painful punishment because they used to disbelieve.”

The scholars differ in stating the status of apostasy for those who intentionally utter the words of kufr.

“Whoever utter words lead to blasphemy casually without the intention of blasphemy, he is considered as apostate”. (Refer al-Mansur fi al-Qawaid Fiqh Syafie, chapter 2, page 112).

“As a conclusion, whoever utter words of blasphemy casually or for fun, then he is considered kufur” (Refer al-Bahru al-Raiq Syarah Kanzi al-Daqaaiq, chapter 5, page 210).

Then, what should be done?

We would like to advise those who are facing this situation to say syahadah again as well as istighfar, so that those sins will be forgiven by Allah SWT. This aligns with the hadith that commands us to always renew our faith. The Prophet PBUH said:

“Renew your faith.” They said, “O Messenger of Allah, how can we renew our faith?” The Prophet said, “Say often there is no God but Allah.”

Allah SWT is the Most Gracious and the Most Merciful. Hence, seek forgiveness upon sins done with pure repentance. Allah SWT says: