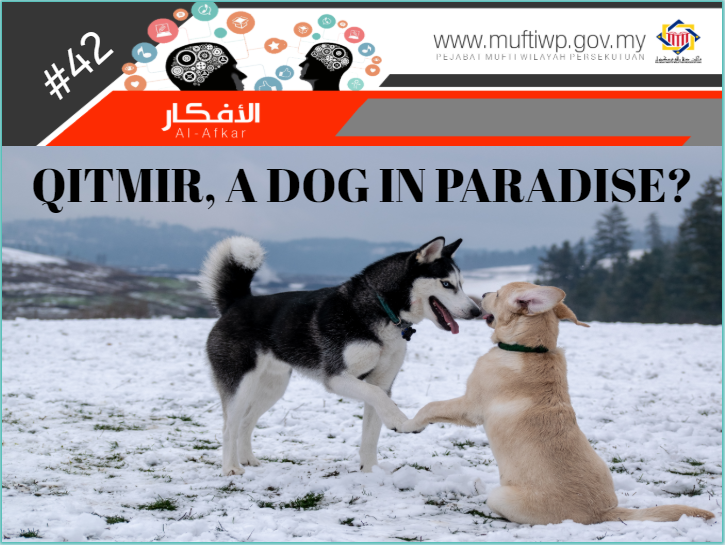 Can Ustaz explain the story of a dog named Qitmir? Will Qitmir be in paradise?

The story of the dog named Qitmir is recorded in the Quran through the statement of Allah SWT:

“And you would think them awake, while they were asleep. And We turned them to the right and to the left, while their dog stretched his forelegs at the entrance. If you had looked at them, you would have turned from them in flight and been filled by them with terror.”

Colour and Name of the Dog

According to Imam al-Baghawi Rahimahullah, most commentary scholars hold the opinion the verse (وَكَلْبُهُمْ بَاسِطٌ ذِرَاعَيْهِ بِالْوَصِيدِ) refers to a dog. Narrated by Ibn Juraij, it is a lion and the lion is called as “dog”. The Prophet PBUH once recite a supplication for ‘Utbah bin Abu Lahab:

“O Allah, send to them a dog (wild animal) that You have created from among the animals of Yours (of Your creations).”

Then, he was attacked by a lion.

Looking at this issue from another angle, Imam Ibn Kathir explains:

“There are numerous narrators and commentary scholars who detailed the story of this dog. Most citing from Israiliyyat stories where most are fake and there is no benefit in their khilaf (differing of opinions) regarding the name or color of the dog.” (See al-Bidayah wa al-Nihayah, 2/115)

Hence, it’s clear that there are two opinions as to how we should interact with story of the dog of Ashabul Kahfi. Some chose to discuss the details of it, while others stop, just citing the story mentioned in the Quran.

Will Qitmir be in Paradise?

We include the narration from Abu Hurairah RA, where he said:

“Indeed, Allah will assemble all of His creations (on the day of Judgement). (Which includes) all animals, birds and humans. Then, Allah will command the animals and birds: “Turn to dirt.” (See Tafsir al-Tabari, 24/181)

Thus, from the above athar of Abu Hurairah, all animals will turn to dirt in the hereafter.

Some scholars discuss the story of Qitmir in detail while others chose to state only what has been revealed in the Quran. We celebrate and respect both these opinions, for both showcase how the knowledge of Islam itself is vast and deep in explaining certain issues.

However, we are inclined towards the opinion of our teacher, Syeikh Muhammad al-Amin bin Muhammad al-Mukhtar al-Syanqiti:

“The opinions of commentary scholars regarding the name of their (Ashab al-Kahfi) dog, some stating its name as Qitmir, Humran and other names. We decided to not continue the discussion of it for it has no benefit. In the Quran, there are numerous other matters which are not explained to us by Allah SWT, His messenger the Prophet PBUH, nor are there any evidences regarding it. Thus, the discussion about these matters are unnecessary and unbeneficial.” (See Adhwa’ al-Bayan, 2/226)

This is as concluded by Allah SWT regarding the story of Ashabul Kahfi, where the wisdoms and lessons are to be found in the story itself, rather than the details of it. The lessons of tauhid which are consistent with the teachings of Islam from the story itself should be considered and contemplated deeply, relevant with our time. Allah SWT states:

“And similarly, We caused them to be found that they [who found them] would know that the promise of Allah is truth and that of the Hour there is no doubt. [That was] when they disputed among themselves about their affair and [then] said, "Construct over them a structure. Their Lord is most knowing about them." Said those who prevailed in the matter, "We will surely take [for ourselves] over them a masjid."

Regarding the story of Qitmir, we did not find any sahih hadith which states that Qitmir will be in paradise in the hereafter. Furthermore, any statement regarding the unseen must be supported with sahih evidences. Through the above stated athar, all animals will turn into dirt in the hereafter. On the matter of whether we will be able to be with our beloved pets in paradise, we have answered this issue here.

May Allah SWT give us the correct understanding in religion and make it easy for us to practise it. Amin.