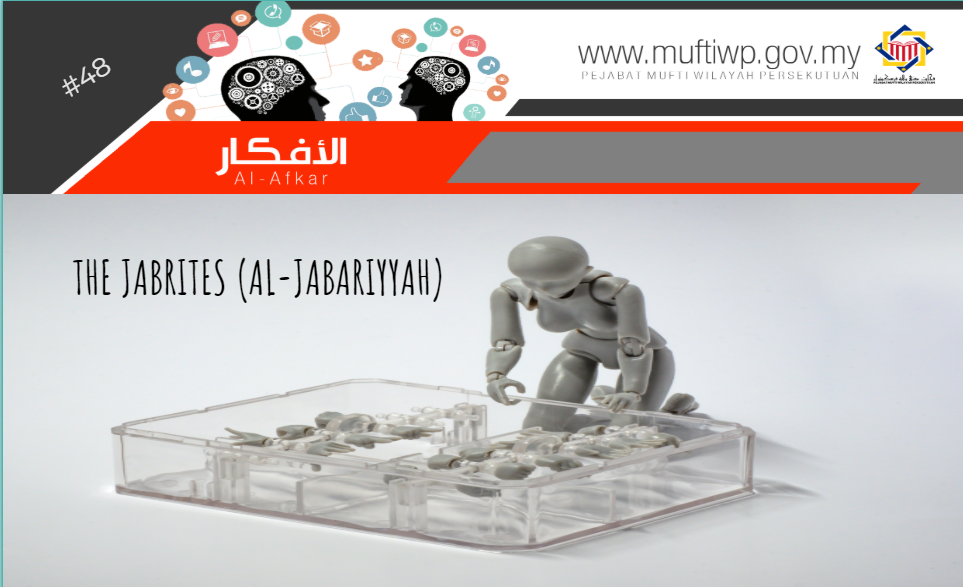 What is meant by al-Jabariyyah?

The phrase Jabariyyah originated from the word ‘jabara’, which means compulsion and coercion in doing something. (Refer: al-Munjid, page 78). Technically, Al-Jabr means denying free-will upon humans and everything is predetermined in the hands of Allah. The Jabrites are divided into some groups, among them are Jabariyyah Khalisah (Pure Jabrites) and Jabariyyah Mutawassitah (Medium / Middle Jabrites).

Jabariyyah Khalisah is a group of people who absolutely deny free-will and believe that humans have no power upon everything. While, Jabariyyah Mutawassitah still acknowledge the will of a human, but claim it as having no effect. They named this exertion (kasb) as al-qudrah al-hadithah. Refer: al-Milal wa al-Nihal, 1/85)

They are the people who are being extravagant in the matter of taqdir (fate) to the extent that they think humans have neither wants nor choice in doing something. Everything is enforced by Allah SWT, like shivers which is beyond the control of a human being.

According to Syeikh Hassan Ayyub, the founder of Jabarites is Jahm bin Safwan; a man from Khurasan. Jahm is a non-Arab Muslim (mawali) who was born in Kufah. His followers are known as Jabarites; those who believe that humans are forced to act in certain ways like feathers blown by the wind. (See: Tabsit al-‘Aqa’id al-Islamiyyah, page 297). Their dalil is the Quranic verse:

In philosophical discussions, there is a doctrine named fatalism. Fatalism can best be understood as a philosophical idea in which humans are powerless to do anything other than what we actually do. Nietzche named an attitude of resignation in the face of some future event or events which are thought to be inevitable as Turkish fatalism. Humans and fate are seen as two opposing entities. Humans may show some effort to “challenge” the fate, but still, fate will always “win the race”. Hence, the best action is through the resignation of ourselves towards fate.

Sects under the Doctrine of Jabarites

Jahmiyyah: They are the followers of Jahm bin Safwan from among the Jabariyyah Khalisah. This sect propagates in Turmuz. Jahm was then killed by Salim bin Ahwaz Al-Mazini on the last reign of Umayyad Empire. They believe that humans have no self-determination, free-will, ability and even efforts. Besides, humans are also seen as having no choice, as all is predetermined by Allah SWT. Human actions merely a symbolic or representational like the spinning of the earth, rise and setting of the sun as well as the tide and waves. All is determined by Allah. It is also considered as fulfilment of obligations, accepting rewards and sins.

Najjariyyah: The founder of this sect is al-Husain bin Muhammad al-Najjar. It is also known as al-Husainiyyah based on his name and is categorized under Jabariyyah Mutawasitah. In the issue of Allah’s will (af’al Allah) and humans’ will (af’al al-‘ibad), Najjariyyah states that Allah has absolute power over human’s actions, be it good or bad as what is presented by Jahm bin Safwan. However, what differentiates them is in the matter of exertion (kasb). This means, humans may influence new willpower in generating their actions. However, all things happen are still under the will of Allah SWT.

Dirariyah: This sect is founded by Dirar bin ‘Amru al-Kufi which propagates during the last reign of Umayyad Empire. This belief of Dirar’s is also known as a medium sect as the Najjariyah on the concept of exertion (kasb). According to this sect, God and humans cooperate in generating human actions. In which, humans are not merely forced in their actions. However, all actions are still under the will of Allah SWT.

The scholars oppose them on some issues. Among them is the issue of compulsion, as they abandon actions which are the prerequisites of taqdir because humans are claimed to be powerless and have no power upon it. (Refer: Tabsit al-‘Aqa’id al-Islamiyyah, page 298).