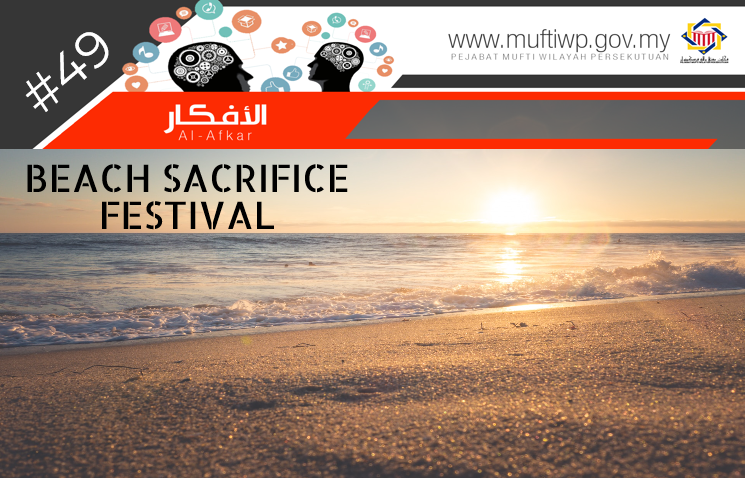 My villagers sacrifice cows and goats, then the bodies are dedicated to the sea. They are of the opinion that by doing this, it may shield them from the sea spirit. Is this ritual acceptable in Islam?

Animal sacrifice or offering is a popular ritual performed by farmers and fishermen in the east coast especially in Kelantan and Terengganu before the fishing season in the old times.

A white bison or buffalo is sacrificed and washed into the sea to calm the sea spirit so that it does not harm the fishermen who are going to sea. The ritual takes place for several days and the villagers from various places will stay there in tents for the sacrifice and festivities.

The beach festival is usually held after the harvest season around March. Originally, the beach festival is held concurrently with animal sacrifice by washing off the head of a buffalo into the sea to calm the sea spirit to make it easy for them for the fishing season. The beach festival is held to prevent any disasters for during the monsoon season in the east coast states where there will be strong winds and rough sea with huge waves that would prevent them from fishing. The rainy season will be followed with strong winds without rain, from January to February which would also prevent them from fishing for most of them only have small boats. (See Festivals of Malaya, pg.15)

It is wajib for every animal sacrifice to be for Allah SWT. If the sacrifice is an offering for an idol, another Muslim or prophet, the slaughtered animal is not halal. Allah SWT states:

“…and that which has been dedicated to other than Allah,”

Whether the animal slaughtered for other than Allah SWT or another’s name is recited during the slaughter of the animal. Allah SWT state:

Say, "Indeed, my prayer, my rites of sacrifice, my living and my dying are for Allah, Lord of the worlds. No partner has He. And this I have been commanded, and I am the first [among you] of the Muslims."

The words of Mulla Ali al-Qari as cited by Syeikh Hassan Ayub (See Tabsit al-‘Aqa’id al-Islamiyyah, m. 168) stated: “It is impermissible to ask for help from the jinn. Indeed, Allah SWT cursed the disbelievers for doing so. He further included Allah SWT’s statement:

And [mention, O Muhammad], the Day when He will gather them together [and say], "O company of jinn, you have [misled] many of mankind." And their allies among mankind will say, "Our Lord, some of us made use of others, and we have [now] reached our term, which you appointed for us." He will say, "The Fire is your residence, wherein you will abide eternally, except for what Allah wills. Indeed, your Lord is Wise and Knowing."

Ibn Qayyim said: “Whoever sacrificed for the shaytan and ask from it or get closer to it, then he is the slave of shaytan. This is not considered as worship but he is being used (by shaytan)…” (See Bada’i al-Fawa’id, 2/235-236)

In conclusion, this practise is haram and included as syirk towards Allah SWT. Any slaughter performed to get oneself closer to other than Allah SWT is haram and a branch of syirk. Wallahua’lam.