AL-AFKAR #52: SIGNS THAT ALLAH SWT HAS ACCEPTED OUR REPENTANCE 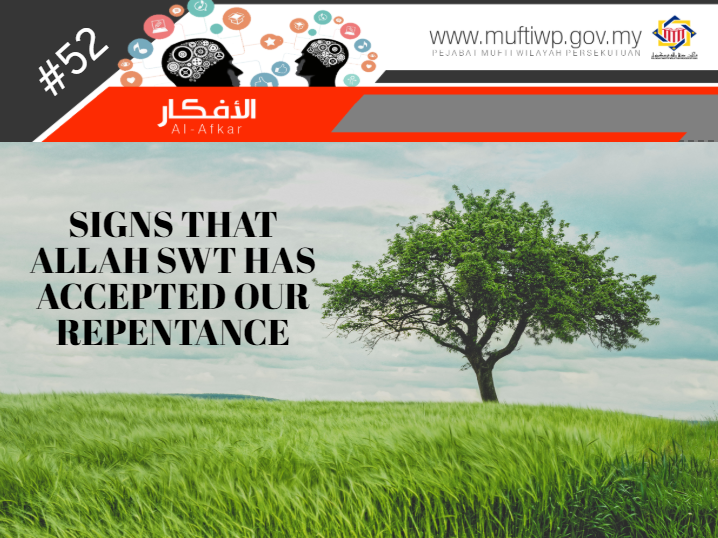 We will begin with the commandment of repentance for each and every one of us stated by Allah SWT in the Quran:

“And turn to Allah in repentance, all of you, O believers, that you might succeed.”

Ibn Kathir said: “Do whatever I ask of you with good conduct and character. At the same time, leave the bad conduct and character of the jahiliyyah people. The reason is, true success is by obeying the commandments of Allah SWT and the Prophet PBUH and leaving the prohibitions.” (See Tafsir al-Quran al-'Azim, 6/50)

To answer the question above, we will discuss it as the following:

First, is it possible to ascertain whether or not Allah SWT has accepted the repentance of someone? The opinion of the majority of scholars’ states that for those who have really repented fulfilling all the prerequisites and conditions of repentance, then it is certain that the repentance is accepted by Allah SWT, as stated by Ibn Rajab:

For whoever repents sincerely, he has fulfilled all conditions of repentance itself. This is the same as when a disbeliever truly embraces Islam. This is the opinion of the majority of scholars. The explanation made by Ibn Abd al-Bar states that it is what has been agreed upon by the scholars. (See Jami’ al-‘Ulum wa al-Hikam, 1/418)

Among the evidence that scholars used is a statement of Allah SWT:

“Indeed, Allah does not forgive association with Him, but He forgives what is less than that for whom He wills.”

The same is stated in a narration from Aisyah R.Anha, where the Prophet PBUH said:

“Indeed, a slave, if he admits of his sins and then he repents, surely Allah SWT will accept his repentance.”

Mulla Ali al-Qari in Mirqat al-Mafatih (4/1616) said: “When someone realizes that he is sinful, then he repents fulfilling all the prerequisites and conditions such as regret, leaving the act, determination and work hard to improve himself, then Allah SWT will accept his repentance, in accordance with His statement:

“And it is He who accepts repentance from his servants and pardons misdeeds,”

Al-Qurtubi said: “Allah will surely forgive any form of sins with the exception of shirk before they are Muslims. And Allah is the All-Knowing regarding whatever you did, whether it is good or bad.” (See al-Jami' li Ahkam al-Quran, 7/27)

Abu Laith al-Samarqandi in his book Tanbih al-Ghafilin states that some of the scholars states: The acceptance of someone’s repentance is known through 4 signs:

A wise man was asked: “Are there certain signs that someone’s repentance is accepted?” He answered: “Yes, there are 4 signs, which are:

Hence, it is said that when all the above is fulfilled, then he is included from among the people that is stated in the following verse:

Atha’, Muqatil bin Sulaiman and al-Kalbi commented on the above verse stating that Allah SWT loves those who always repent and purify themselves from sin as well as impurities. (See Ma'alim al-Tanzil, 1/259)

As a conclusion, it does not solely mean that when someone sees the signs that his repentance is accepted by Allah SWT, he should stop repenting. However, the clear sign that someone really has repented is when he is consistent in his repentance through his life, as the Prophet PBUH himself is consistent in repenting through istighfar through his life for 100 times a day.

This is stated in a hadith narrated by al-Aghar al-Muzani:

“My heart is invaded by unmindfulness, and I ask Allah's pardon a hundred times in the day.”

Imam Nawawi cited the words of a linguist: “The word ‘ليغان’ means anything that covers the heart.” While al-Qadhi ‘Iyadh said, it means in times of weakness and un-mindfulness from the remembrance of Allah which is supposed to be continuous. When it happens, he considers it as a sin thus he immediately repented through istighfar. There is an opinion that states that the Prophet PBUH is continuously worried about his ummah. (See Syarh al-Nawawi ‘ala Sahih Muslim, 17/23)

Hopefully, we are all included among those who repent and whose repentance is accepted by Allah SWT. Amin. We end this discussion with the following supplication:

“Our Lord, we have wronged ourselves, and if You do not forgive us and have mercy upon us, we will surely be among the losers.”