AL-AFKAR #53: HOW TO DIFFERENTIATE BETWEEN ISTIDRAJ AND BLESSINGS FROM ALLAH SWT? 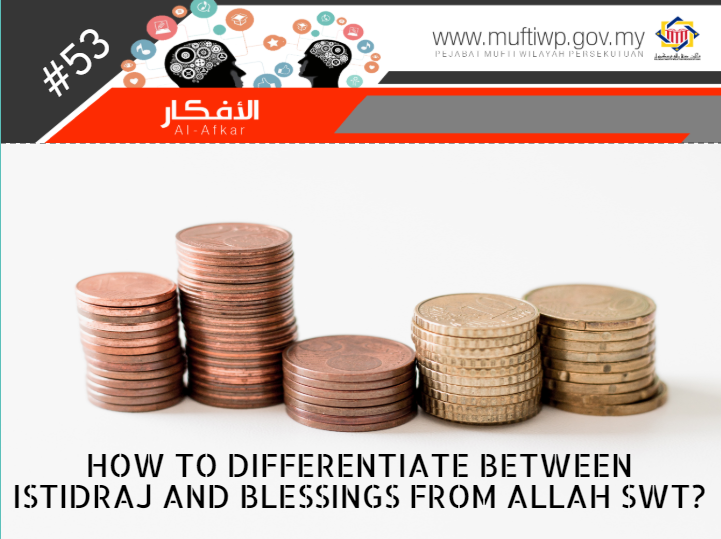 Assalamualaikum SS Dato’ Seri Mufti. How do we differentiate between istidraj and the blessing of Allah SWT?

In Mu’jam al-Lughah al-‘Arabiyah (1/734), it is stated that istidraj actually comes from the word da-ra-ja (درج) which means going up from one level to the next (elevated). While, istidraj from Allah SWT for His slaves means a ‘punishment’ where he is given more and more, but eventually everything will be removed from him. Allah SWT will leave him be and his punishments will be delayed. Allah SWT states:

“We will progressively lead them [to punishment] from where they do not know.”

Al-Hasan said: “How many people are entangled with fitnah when he was praised and how many were deceived when his weaknesses are hidden.” (See al-Jami’ li Ahkam al-Quran,18/251 and Tafsir al-Siraj al-Munir, 4/264)

Sahl bin Abdullah commented on the above verse stating: “Luxury and comfort which results in ungratefulness.” (See al-Bahr al-Madid, 2/581)

Al-Razi said: “Istidraj is when one asks for the elevation from one level to the next but they are deceived. All the while they are sinning, Allah SWT gives them more and more that makes them forget from doing istighfar.” (See al-Tafsir al-Kabir, 15/77)

In a hadith narrated from ‘Uqbah bin ‘Amir RA, the Prophet PBUH said:

“When you see Allah SWT gives a slave of the worldly matters that he desires, when he still continues to sins, then (know) that those are the istidraj from Allah SWT.”

Mulla Ali al-Qari said: When you see Allah SWT give a slave of His worldly riches, while he continuously committing sins, then the reason for it is, it is an istidraj and deception for him. So true are the words of Allah SWT: “سَنَسْتَدْرِجُهُم مِّنْ حَيْثُ لَا يَعْلَمُونَ” which means “We will progressively lead them [to destruction] from where they do not know.” (See Mirqat al-Mafatih Syarh Misykat al-Masabih, 9/396)

“So, when they forgot that by which they had been reminded, We opened to them the doors of every [good] thing until, when they rejoiced in that which they were given, We seized them suddenly, and they were [then] in despair.”

In Tafsir al-Jalalain, it is stated: “When they turn away from the reminders that were sent to them, ignoring the reminder, Allah SWT opens all doors of worldly gains to them in the form of istidraj for them. Then, they are proud and arrogant for their riches. Thenceforth, we punish them. And they are silent from any goodness.” (See Tafsir al-Jalalain, 2/340)

Ibnu ‘Athaillah al-Sakandari in his book al-Hikam said: Someone should feel anxious when he receives goodness upon goodness whilst he continues on sinning. He said:

“You should feel scared when you continue to receive goodness from Allah SWT while you still continue sinning towards Him. The reason is, it may be an istidraj (charm and deception) as stated by Him: We will progressively lead them [to destruction] from where they do not know. (Surah al-Qalam, verse 44)”

Syeikh Zarruq said, “O my students, fear His goodness in terms of health, free time, and great sustenance, in the middle of your transgressions to Him which are carelessness and negligence.” (See Iqaz al-Himam fi Syarh al-Hikam, pg. 101)

Blessing from Allah SWT usually happens before and after taqwa (consciousness of Allah), good deeds and worship. If someone performs the night prayers, donates, perform the sunnah Dhuha prayer, then Allah SWT showers him with goodness, then it is a blessing or karamah from Allah SWT.

However, if someone neglects his five daily obligatory prayers, commit sins and transgressions continuously, then he is living a life of comfort and luxury, then it is named as istidraj.

Thus, let us increase our taqwa towards Allah SWT, in accordance with His statement:

“O you who have believed, fear Allah as He should be feared and do not die except as Muslims [in submission to Him].”