AL-AFKAR #54: ATTRIBUTES OF A SUFI 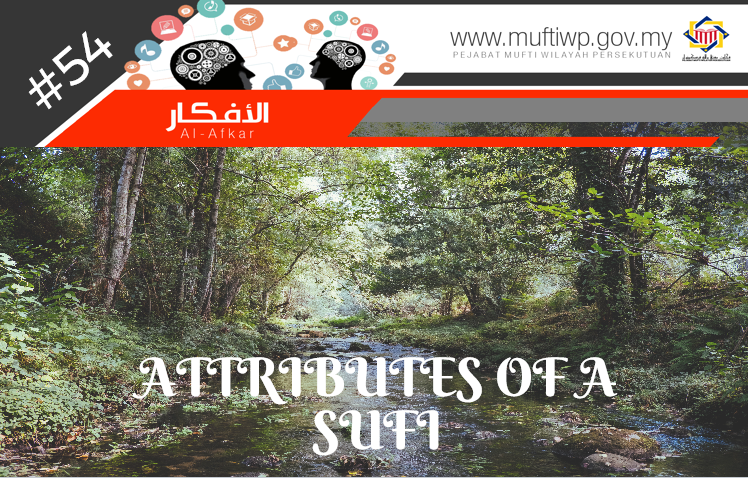 Assalamualaikum SS Dato’ Seri Mufti. Can I know, what are the attributes of a sufi? Hope for an explanation.

The term sufi according to tasawwuf books exists on the middle of the second century of the hijri calendar. The term sufi is recorded to have been known before 200 Hijrah. However, the term starts to spread in the third century of Hijrah. (See al-Risalah al-Qusyairiyyah, pg. 7-8. Also see Muqaddimah Ibn Khaldun, pg. 228)

Abu Nu’aim in Hilyah al-Auliya’ states the first person given the title sufi is Abi Hasyim al-Kufi (150 H) for he follows the lifestyle of the Prophet PBUH and the companions, who prioritizes modest lifestyle, uninfluenced by pleasure and worldly luxury.

The same is for the people of zuhud (asceticism) who are also given this title such as Jabir bin Hayyan and several others from Kufah like Mansur bin Ammar. While in Basrah, this moniker is given to Abu Hassan al-Basri. Its usage became popular and is given to Malik bin Dinar, Abd al-Wahid bin Yazid and others. (See Soal Jawab A-Z Tentang Tasawuf (A-Z Questionnaire on Tasawwuf), pg. 41-42)

“Those who believed and were fearing Allah,”

Ibnu Kathir said: Allah SWT inform us that His beloved servants are from the believers and people of taqwa (god-fearing people). (See Tafsir al-Quran al-'Azim, 4/292)

Syeikh al-Maraghi said: The meaning of His beloved servants (wali) are those who believe in Allah SWT, His angels and His books with true faith by worshipping Him in accordance with the commandments of taqwa. (See Tafsir al-Maraghi, 6/3075)

Zu al-Nun al-Misri once said: The sufis are those who prioritize Allah SWT over anything else, until Allah SWT prioritizes them over others. (See al-Risalah al-Qusyairiyyah, pg. 418)

May Allah SWT give us the true knowledge and understanding in worshipping Him and make us from among those who He love. Amin.