AL-AFKAR #55: TAUHID AND ITS STAGES ACCORDING TO IMAM AL-GHAZALI 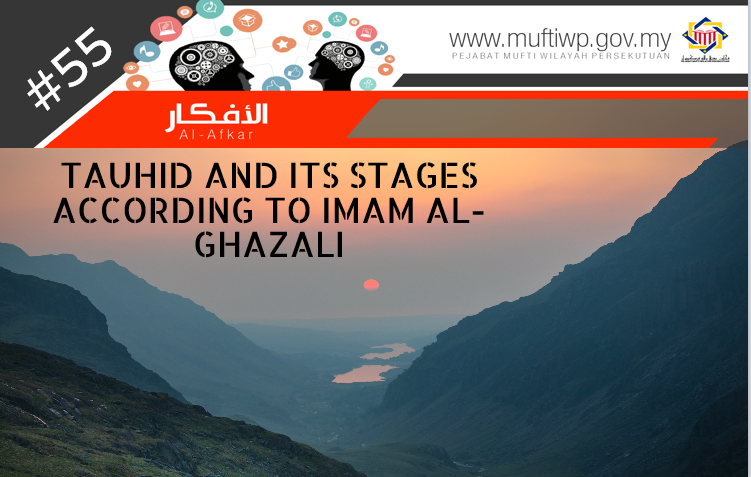 Assalamualaikum SS Dato’ Seri Mufti. I want to know, what is the meaning of tauhid and I’ve once read regarding the stages of tauhid explained by Imam al-Ghazali. Can you explain this? Thank you.

The term tauhid lexically comes from the Arabic word “وحّد” which means unifying something and the word shows its singularity. Its meaning includes that it is distinct and different from everything. For this reason, in declaring the oneness of Allah SWT, the Arabs said “اللهُ وَاحِدٌ” The One and Only Allah where nothing is comparable to Him in every aspect. Hence, the word tauhid (توحيد) includes the meaning of the singularity of Allah SWT, where nothing can ever compare or compete with Him. Thus, a person who do not believe this is so – the singularity and oneness of Allah SWT – then indeed, he does not have tauhid. (See Tahzib al-Lughah, 5/192-198 and Mu’jam Maqayis al-Lughah, pg. 1084, al-Ta’rifat, pg. 96)

Whereas the word tauhid is a term used to declare the oneness of Allah SWT from anything that is specified for Him such as His divinity, Godliness, and His names and attributes. The usage of the term and its meaning is mentioned in several statements of Allah SWT in the Quran, among them are:

Say, "He is Allah, [who is] One, Allah, the Eternal Refuge. He neither begets nor is born, nor is there to Him any equivalent."

“And your God is one God. There is no deity [worthy of worship] except Him, the Entirely Merciful, the Especially Merciful.”

Imam al-Junaid when asked regarding tauhid answered: Declaring the oneness of Allah SWT, where He neither begets nor is born. Where there is no associate, doubt and similarity to Him; none is able to ask how; but nothing is like Him. He is the All Hearing and All Knowing. (See al-Luma' by Abu Nasr al-Siraj al-Tusi – tahqiq Syeikh Abd al-Halim Mahmud and Taha Abd al-Baqi Surur, pg. 49)

While Imam al-Qusyairi said: “Tauhid is you knowing everything that is created in this universe is due to Allah, who stands while He is the sovereign God who grows and maintains everything. Nothing, not even the smallest matter exists but is created by Him.” (See Lataif al-Isyarat, 2/23)

Imam al-Ghazali in his book, Ihya’ Ulum al-Din explained regarding the truth of tauhid where it is divided into four stages as the following:

According to Imam al-Ghazali, the fourth stage is the most elevated for they are the people who do not see none other than Allah. This is the highest stage in tauhid.

May Allah SWT bless us with knowledge and correct understanding in practising His commandments. Amin.