AL-AFKAR #57: THE ENEMIES OF A MUSLIM 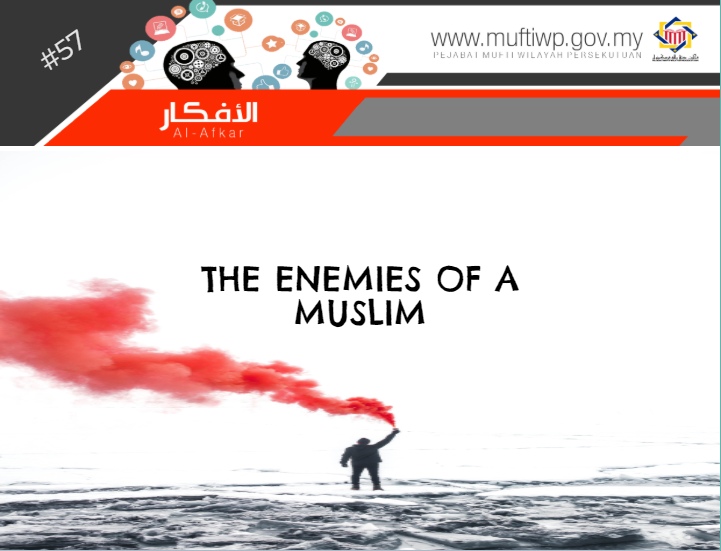 Assalamualaikum SS Dato’ Seri Mufti. I have read somewhere regarding the enemy of a Muslim is not just the shaytan who whispers and deceives humans, but also the nafs (desires) of the man himself. Can I get a clearer explanation, who or what are other enemies of a Muslim?

In answering the question, the real enemy of a Muslim is uncountable, whether it is the internal or external enemy. Here we include 4 enemies of a Muslim according to Imam Ahmad bin Sahl, which are:

First: World. Its weapon is creations, while its prison is uzlah.

Fudhail bin Iyadh once said: “If the world is compared to the perishable and temporary gold and the eternal hereafter with a long-lasting stoneware, then it is better to choose the stoneware compared to the gold.”

Yahya bin Mu’az said: “Three characteristics an aulia’ of Allah should have are:

Second: Shaytan. Its weapon is satiation and full and its prison is hunger.

“Did I not enjoin upon you, O children of Adam, that you not worship Satan? [for] indeed, he is to you a clear enemy!”

Whereas, in a hadith from Miqdam bin Ma’di, the Prophet PBUH said:

“The human does not fill any container that is worse than his stomach. It is sufficient for the son of Adam to eat what will support his back. If this is not possible, then a third for food, a third for drink, and third for his breath.”

Syeikh al-Mubarakfuri explains: “The filled stomach (with food) will lead to harm towards the religion and the world.” (See Tuhfah al-Ahwazi, 7/44)

Abu ‘Awanah al-Isfarayini said that al-Rabi’ states, he heard al-Imam al-Syafi’e said: “I was never full for 16 years except once, then I insert my hands (into my mouth) to throw it up.” (See Siyar A’lam al-Nubala’, 19/24)

Ibnu Abi Hatim narrated from al-Rabi’ with the continuation of the statement of Imam Syafie:

Third: Nafs. Its weapon is sleep and its prison is staying up during the night (for worship)

“Indeed, the soul is a persistent enjoiner of evil, except those upon which my Lord has mercy.”

While in a hadith, the Prophet PBUH said:

“Hold fast to Qiyam al-Lail, for it is the practice of the righteous before you, and indeed Qiyam al-Lail is a means of nearness to Allah, a means of prevention from sin, an expiation for bad deeds, and a barrier for the body against disease.”

Syeikh al-Mubarakfuri said: The Prophet PBUH said ‘Hold fast to Qiyam al-Lail’ means the sunnah tahajjud prayer. And the Prophet PBUH also said ‘it is the practice of the righteous’ means righteous people is consistent in their night prayers. And ‘expiation for bad deeds’ means that his sins will be forgiven and covered. (See Tuhfah al-Ahwazi, 9/375)

Fourth: Hawa. Its weapon is talking and its prison is staying quiet.

“O you who have believed, fear Allah and speak words of appropriate justice. He will [then] amend for you your deeds and forgive you your sins. And whoever obeys Allah and His Messenger has certainly attained a great attainment.”

“And he who believes in Allah and the Last Day, must speak good or remain silent.”

Imam Abu Hatim said: “Someone with the capability to think should stay quiet rather than talking. The reason is, there are innumerable people who regret their speech, while there are little of whom has ever regret staying quiet. The greatest calamity for a person is someone who talks without thinking. And an intelligent person should prioritize using both his ears rather than his mouth. He should realize that humans are created with two ears and one mouth are such that they could prioritize in listening rather than talking.” (See Raudhah al-‘Uqala’ wa Nuzhah al-Fudhala’, pg. 45-47)

May Allah SWT bless us with guidance and help us in facing our enemies who persistently try to make us forget and distract us from remembering Allah SWT. Amin.