AL-AFKAR #60: WILL THE JINN DIE JUST LIKE HUMANS DO? 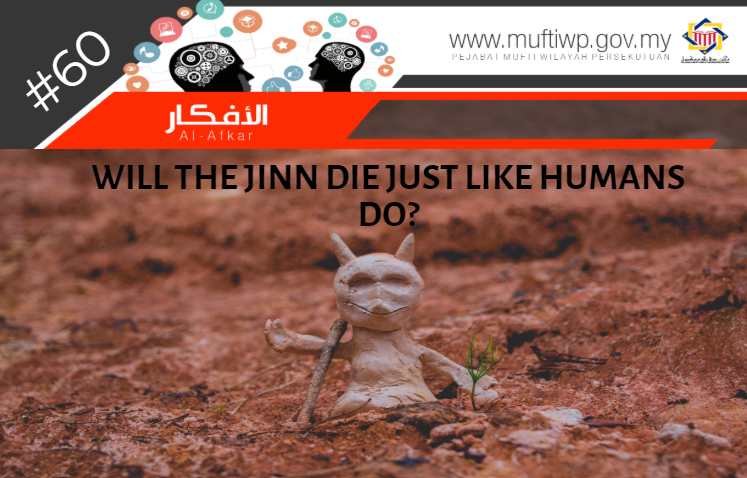 Assalamualaikum SS Dato’ Seri Mufti. Will the jinn also die the same as humans do?

Basically, every creation will perish and die. Allah SWT state:

“Everyone upon the earth will perish, and there will remain the Face of your Lord, Owner of Majesty and Honour.”

Ibn Kathir said: Allah SWT state that all inhabitants on earth will perish and die. It is the same for the inhabitants of the heaven with the exceptions of those Allah SWT desires. (See Tafsir al-Quran al-‘Azim, 7/110)

Answering the above question, jinn are from among the creations that will experience death, the same as humans do. Among the evidences for this is a general statement of Allah SWT:

“Those are the ones upon whom the word has come into effect, [who will be] among nations which had passed on before them of jinn and men. Indeed, they [all] were losers.”

Imam al-Alusi said: “According to the statement of Allah SWT “فِي أُمَمٍ قَدْ خَلَتْ” among nations which had passed on before them, then the jinn also die from one century to the next just as humans do.” (See Ruh al-Ma’ani, 21/26)

The same is stated in a general statement of Allah SWT:

“Every soul will taste death,”

Whereas, in a hadith narrated from Ibn Abbas R.Amhuma, the Prophet PBUH said in one of his supplications:

"I seek refuge (with YOU) by Your 'Izzat, None has the right to be worshipped but You Who does not die while the Jinns and the human beings die."

Here, we clearly state that the jinn die the same way as humans do according to the above hadith.

Al-Tabrizi said: “The jinn and humans are specifically mentioned for both are creations who will be held accountable for their deeds and those who receive revelation.” (See Mir’at al-Mafatih, 18/336)

However, among the jinn are those named as Iblis. According to scholars, the death for Iblis are delayed until the time stated as “the time well-known”. This is recorded in the statement of Allah SWT:

He said,"My Lord, then reprieve me until the Day they are resurrected." [Allah] said, "So indeed, you are of those reprieved. Until the Day of the time well-known."

In explaining the meaning of “إِلَىٰ يَوْمِ الْوَقْتِ الْمَعْلُومِ” (Until the Day of the time well-known) is said to be as when the first trumpet is blown. (See Tafsir al-Jalalain, 4/339; al-Muharrar al-Wajiz by Ibn Atiyyah, 2/444; al-Wajiz fi Tafsir Kitab al-Aziz by al-Wahidi, 4/242)

Imam al-Baidawi said: The meaning of the statement of Allah SWT, until the time well-known is until the time of your death which has been predetermined by Allah SWT. According to the opinion of majority of the scholars, it is when all humankind is dead when the first trumpet is blown. (See Anwar al-Tanzil wa Asrar al-Ta’wil, 3/370)

Imam al-Alusi said: Allah SWT state “إِلَىٰ يَوْمِ الْوَقْتِ الْمَعْلُومِ” (Until the Day of the time well-known), there is difference of opinions regarding the usage of the word, the popular opinion is the day when the first trumpet is blown (يوم النفخة الأولى ) and not on the day when all creations are resurrected (يوم البعث ) for the day of resurrection is not the day of death. However, some of them claim this meaning of (يوم البعث) is true which means the day of resurrection and not on the day of the first trumpet and the shaytan will not necessarily die on this day, for the shaytan may possibly die on the first day and then they are resurrected together with other creations. (See Ruh al-Ma’ani, 8/91)

Imam al-Qurtubi explained the above verse saying: Ibn Abbas R.Anhuma said that the meaning of the blowing of the first trumpet means the day of the death of all creations. (See  al-Jami’ li Ahkam al-Quran, 10/27)

Jinn will also experience death just like humans do. This is clear from the Quranic and prophetic evidences presented above.

However, the exception for this is the Iblis, where they will only die when the first trumpet is blown. Hence, at this time, Iblis and all creations who are still alive will die altogether.

May Allah SWT give us the knowledge and understanding in practising His commandments. Amin.