AL-AFKAR #65: IS IT PERMISSIBLE TO STRIVE IN FINDING THE TA’WIL (INTERPRETATION) OF DREAMS? 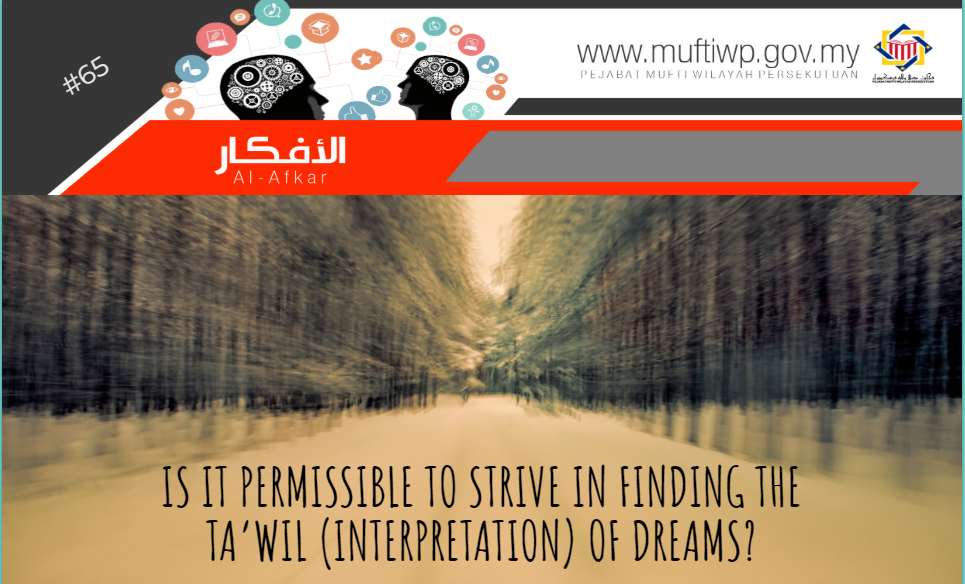 Assalamualaikum SS Dato’ Seri Mufti. Are we allowed to strive in finding the takwil of our dreams?

Basically, there are several types of dreams experienced by a Muslim. It is explained in a hadith narrated by ‘Auf bin Malik RA, where the Prophet PBUH said:

“Dreams are of three types: Some are terrifying things from Satan, aimed at causing grief to the son of Adam; some are things that a person is concerned with when he is awake, so he sees them in his dreams; and some are a part of the forty-six parts of prophecy.”

From the above hadith, it is understood that dreams experienced by a person are divided into three types:

Our teacher, Syeikh Atiyyah Salim Rahimahullah upon commenting on the 46 parts of prophethood said; the reason is, up to 23 years in the life of the Prophet Muhammad PBUH, it is preceded by approximately 6 months of this God-given dreams. Hence, 6 months of the 23 years equal to 1/46. Wallahua’lam.

Ibnu Battal, on the other hand, stated that dreams are divided into two types:

First: Dreams which are clear and eventually becomes a reality, like a man dreamt of giving dates to another person and he does the same the next morning. Such dreams do not need any interpretation.

Second: Dreams which come in the form of symbol. We need those with knowledge and experience in interpreting this kind of dreams as they are so subtle and complex. (Refer: Fath al-Bari, 19/451)

However, it is reminded that dreams are not to be used as a reference in determining rulings of matters. Imam al-Syatibi said, “Verily, dreams from the non-prophets cannot be a reference for any ruling according to syarak, except after it has been considered to be in accordance with Shari’ah rulings. If they aligned with the Shari’ah, then it is permissible to be practised. When it contradicts the syariah, then it is obligatory to be left and abandoned. The benefit of these dreams is to only convey good news or reminders. While, in determining rulings, then it is completely impermissible. (Refer: al-I'tisam, 2/78)

Abd al-Rahman bin Yahya al-Mu’allimi stated that the scholars agreed that dreams cannot be used as an argument (dalil). Hence, dreams are merely telling of good stories or reminders. They can also be a form of ‘ibrah (lesson) when they are in accordance with authentic Shari’ah evidences. (Refer: al-Tankil, 2/242)

A person who wishes to interpret dreams should have ample knowledge as well as attributes of righteousness and pious. He should also always depend on Allah SWT. The Prophet PBUH himself interpreted dreams, and he once said to his companions one morning, as narrated by Samurah bin Jundub RA, where the Prophet PBUH said:

“Allah's Messenger (ﷺ) very often used to ask his companions, "Did anyone of you see a dream?" So dreams would be narrated to him by those whom Allah wished to tell…”

Thus, there are numerous scholars who are experts in dreams interpretation, like Ibn Sirin, Imam Syafi’e. Syeikh Abd al-Ghani al-Nablusi and others. Their interpretations are mostly true and accurate. This is a gift from Allah SWT to them.

Another note is the dreams of the righteous people during this era of the end of times is that they are conveying good news. This is stated in a hadith narrated by Abu Hurairah RA, he said: I heard the Prophet PBUH said:

"Nothing is left of the prophetism except Al-Mubashshirat." They asked, "What are Al-Mubashshirat?" He replied, "The true good dreams (that conveys glad tidings).

Al-Hafiz Ibn Hajar said: al-Mubasyyirat is the plural form (jama’) from the word mubasyyirah which is the same as al-busyra; good news that come from the words of Allah " لَهُمُ الْبُشْرَىٰ فِي الْحَيَاةِ الدُّنْيَا وَفِي الْآخِرَة" (For them are good tidings in the worldly life and in the Hereafter). It means dreams which are good and virtuous. (Refer: Fath al-Bari, 12/375)

In order to get true dreams, one should always speak the truth. This is in accordance with a hadith narrated by Abu Hurairah RA, where the Prophet PBUH said:

“And the truest vision will be of one who is himself the most truthful in speech,”

Imam Nawawi said: Manifestly, it is applied in accordance with its absolute form. It is recorded from al-Qadhi Iyadh that some scholars said this matter will happen in the end of times where the knowledge has stopped, most scholars have passed away followed by the righteous people who may enlighten others by their words and actions. So, Allah make the dreams as strength and replacement as well as a reminder for all mankind. (Refer: Syarah Sahih Muslim, 15/20)

For those who experienced good dreams, the first thing for them to do is to supplicate to Allah SWT. If it is a bad dream, then the best for them is to ask for protection from Allah SWT.

May Allah SWT give us knowledge and understanding in practising His religion. Ameen.