AL-AFKAR #79: THE RULING OF BOWING TO ANOTHER PERSON AS A SIGN OF RESPECT 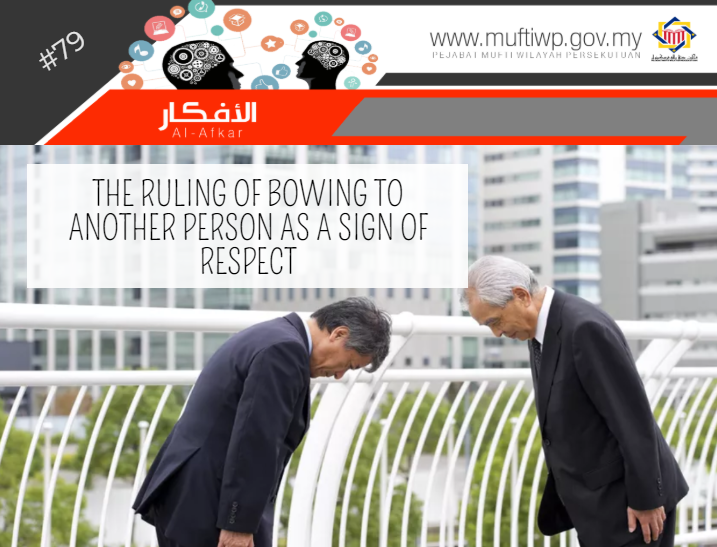 Assalamualaikum SS Datuk Mufti. I’m sorry for asking this question because I still haven’t got a solid answer to this issue. My question is what is the ruling of bowing as a sign of respect to others such as what has been practised in Japan and Korea where they would bow to the judge in court, the chairman in parliament as well as bowing and kissing the hands of a teacher or the elderly? Hope for an explanation from SS Mufti. Thank you.

The same is stated in a hadith of the Prophet PBUH:

This hadith is evaluated as hasan.

Allah SWT clearly states in the Quran that rukuk (bowing) and sujud (prostration) are actions in prayer and are specific worships only to Allah SWT the One and Only, thus, it is haram for other than Allah SWT. Furthermore, this is strengthened by the words of the Prophet PBUH who prohibit a person who meets his brother from bowing in respect to his brother.

According to the question asked, what is the ruling of bowing as a sign of respect practised by the Japanese and Koreans or bowing in respect to a judge in a courtroom, a chairman in parliament and a teacher or elderly where one would also kiss their hands?

We will answer this question according to the theme of the question so that it will give a clear and accurate answer to the questioner.

First, what is the ruling of bowing as a sign of respect or honour towards another person?

The truth is this issue has been discussed by previous scholars. The following are the statement of Syafi’iyyah scholars in explaining the ruling of this issue:

Imam Bujairimi stated in his writing:

However, it is different from the opinion of Imam al-Nawawi who states:

“It is makruh (undesirable) to bow for every matter and every matter is matters as stated by Anas… There is no contradiction on this matter and don’t be deceived by the actions of most people who do this who are from among the people who are associated with knowledge and charity and others similar to them.” (Refer Al-Majmu’ syarh Muhadzab, pg. 21)

Whereas Imam al-Nawawi states that the act of bowing is makruh if the intention is just as a sign of respect.

“Scholars state that the custom of bowing not a bow as low as rukuk (bowing in prayer) when someone meets another person is not considered as an act of disbelief nor is it haram but it is makruh (undesirable).” (Refer al-Mausu`ah al-Fiqhiyyah al-Kuwaitiyyah, vol. 23 pg. 135)

According to the book al-Mausu`ah al-Fiqhiyyah al-Kuwaitiyyah, it is makruh to bow towards another person as long as the bow is not as low as rukuk (bowing in prayer).

The same is stated in the opinion of madhhab Hanbali, where Imam Ibn Muflih al-Maqdisi said in his statement:

In our opinion, the conclusion for the first question is that it is permissible to bow as a sign of honor and respect towards another person on the condition that the respect and honour are not the same or exceed the greatness and honour of Allah SWT. Likewise, the bow must not exceed the limit or has the same characteristic of the rukuk (bowing in prayer).

Second, what is the ruling of bowing to kiss the hands of another person while shaking hands?

As stated in the first question, bowing as a sign of respect or honor is permissible. Kissing the hands of a teacher or an elderly is sunnah. This is as stated in a hadith narrated by Zari’, where he said:

“When we came to Medina, we raced to be first to dismount and kiss the hand and foot of the Messenger of Allah (ﷺ).”

“Kissing the head or hands or foot is sunnah because of the knowledge, piety or honour of a person due to his birth right or lineage.” (Refer Hasyiah Jamal, vol.5, pg. 184)

The same is stated in the opinion of Imam al-Nawawi where he said:

“It is sunnah to kiss the hands of the pious, righteous, zuhud, knowledgeable and others from among the scholars of the hereafter. As for kissing the hands of another person because of his wealth or status or worldly matters then it is greatly discouraged,” (Refer Majmu’ Syarah Al-Muhazzab, vol. 6, pg. 21)

Furthermore, it is in line with the opinion of Syeikh Sayyid Abdurrahman bin Muhammad Ba’alawi who said:

“Imam al-Hafiz al-iraqi said: Kissing the hands and foot of honoured people with the intention of tabarruk (get the blessing) is a good deed and commendable according to the purpose and intention.” (Refer Bughyatul Mustarsyidin, pg. 638)

The conclusion for this issue is it is permissible to bow to another person with the intention of respecting or honouring him. However, it must not be the same or exceed the honour and respect towards the All-Mighty Allah SWT. The same goes for the bow, where it should not be the same or exceed the bow in prayer (rukuk). Moreover, kissing the hands of others for tabarruk is sunnah. However, it must follow the limitations between a man and woman in terms of mahram.