AL-AFKAR #83: WHY DO WE HAVE TO SUPPLICATE IF EVERYTHING HAS BEEN PREDETERMINED? 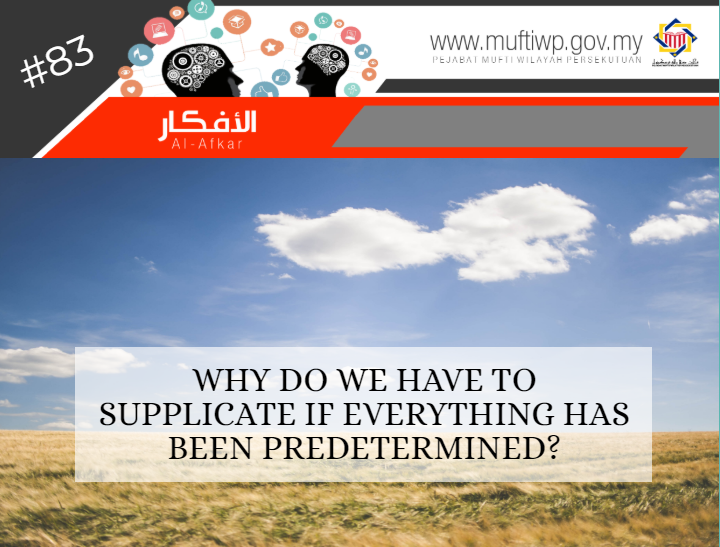 Assalamualaikum ustaz. Why are we asked to supplicate and perform istikharah if everything is already fated?

Supplication according to Imam al-Khattabi is a request of a slave to his Creator hoping for help and assistance from Him. (See Sya’n al-Du’a, 1/4)

Allah SWT has made supplication as the reason a person obtain what he desires. Allah SWT states:

And your Lord says, "Call upon Me; I will respond to you." Indeed, those who disdain My worship will enter Hell [rendered] contemptible.

Imam Ibn ‘Asyur in his commentary stated the above verse is evidence that Allah SWT commanded His slaves to ask from Him for anything that he desires and is also the evidence on the sanctioning of this matter where there is no khilaf in the Muslim ummah itself. (See Tafsir Ibn ‘Asyur, 183/24)

We are commanded to supplicate for the great effects it would have in our lives. From Ibn Umar RA, the Prophet PBUH said:

“Nothing increases one’s life span except righteousness and nothing repels the Divine decree except supplication, and a man may be deprived of the provision by a sin that he commits.’”

A person who does not supplicate are from among those who are confused as to the concept of du’a. In Majmu’ al-Fatawa it is explained: “Whoever said: ‘I do not supplicate nor do I ask, for I only depend on fate,’ then the person is confused. The reason is Allah SWT make du’a and supplication as the reason to attain forgiveness and blessings as well as guidance and sustenance. If a person is fated for goodness with du’a, then the good can never be attained except with du’a.” (See Majmu’ Fatawa, 8/69)

In facing trials and calamities, du’a and supplication to Allah SWT is able to help a person to be patient in times of tribulations. Ibn Qayyim in al-Jawab al-Kafi stated: “Du’a is the most beneficial medicine. It is the enemy of calamities. It is able to heal and overcome calamities, preventing harm, removing or alleviating it. It is the weapon of Muslims. The supplication in facing calamities is divided into three levels:

From the above evidences and explanation, it is clear that the role of supplication is to attain something a person wishes to have. Allah SWT made du’a as the reason for a person to attain forgiveness and blessings from Him. The same for in asking for guidance, help and sustenance from Him.

Here, we reaffirm the promise of Allah SWT thabit for those who make du’a to Him:

“And when My servants ask you, [O Muhammad], concerning Me - indeed I am near. I respond to the invocation of the supplicant when he calls upon Me. So, let them respond to Me [by obedience] and believe in Me that they may be [rightly] guided.”

Ibnu Kathir explained the above verse states that Allah SWT will never disappoint those who supplicate to Him. He neither rejects nor neglects the supplication of a person, for He is the All-Hearing. Among the wisdom from the verse is the encouragement to always supplicate to Him and that Allah SWT would never waste the supplication of His slaves to Him. (See Tafsir al-Quran al-‘Azim, 1/506)

Imam al-Maraghi said: “Istijabah means responding to the call attentively, prepared to grant it. This means because I’m close to them, I will grant their supplication to Me, and they should respond to My call by obeying My commandments to them, which is to believe and perform worship that is beneficial to them, such as fasting, praying, zakat and other forms of worships. What I commanded them is akin to Me granting their supplication by accepting their worship.” (See Tafsir al-Maraghi, 1/368)

Let us all always supplicate and ask to Allah SWT for every matter in our daily lives.