AL-AFKAR #84: THE DEATH OF ANGELS AFTER THE SECOND BLOWING OF THE HORN 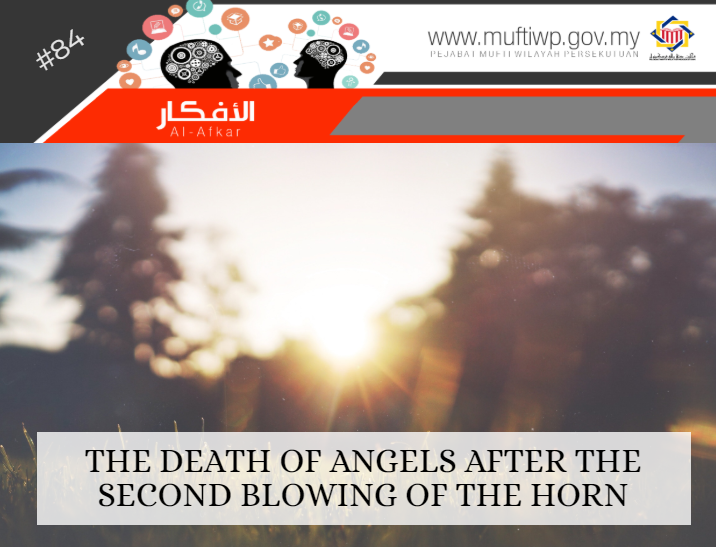 Assalamualaikum SS Datuk Mufti. After the second blowing of the horn, how will the angels die? Will all of the angels experienced death? Hope for an explanation.

Basically, every creation will die or destroyed. Allah SWT states:

“Everyone upon the earth will perish. And there will remain the Face of your Lord, Owner of Majesty and Honor.”

Imam Ibn Kathir explained the above verse saying: Allah SWT tells us that everyone on earth will die and perish. The same applies to the residents of the heavens, except for those which Allah wills. (See Tafsir al-Quran al-‘Azim, 7/110)

Syeikh Dr Wahbah al-Zuhaili commented on the above verse saying: Everyone and everything on earth from humans to all other living creations as well as the creations in the heavens, all of them of whom Allah SWT wills, all of them will be completely destroyed, perished and die. All forms of life will end. There is none that is eternal except Allah SWT the All-Mighty the All-Revered. Destruction and elimination are a certainty for very creation of the heavens and earth on the Last day. (See al-Tafsir al-Munir, 14/243)

“When the above verse is revealed (كُلُّ مَنْ عَلَيْهَا فَانٍ), the angels said: “Destruction is for the people of the earth,” Then the verse (كُلُّ شَيْءٍ هَالِكٌ إِلَّا وَجْهَهُ) is revealed, thus, the angels realized that they are also but mortal creatures which will experience destruction.” (See al-Jami’ li Ahkam al-Quran, 17/165 and al-Kasyf wa al-Bayan ‘an Tafsir al-Quran, 9/182)

Indeed, the angels will also experience death and this is the opinion of the majority of scholars. Imam al-Munawi cited the consensus of the scholars regarding the matter in his book Faidh al-Qadir (3/561).

“Everything will be destroyed except His Face.”

Imam al-Tabari explained, some scholars state the meaning of the verse is that everything will surely be destroyed except those Allah SWT wills. (See Jami’ al-Bayan ‘an Ta’wil Ay al-Quran, 6/53)

Imam Ibn Kathir explained: “This is the second blowing of which the residents of the heavens and earth who are alive will die except of whom Allah SWT wills. This is stated as an affirmation and commentary of the famous hadith regarding the horn. Then, the souls of the creations left in His grasp, until the last creation that will die is the angel of death. And the only one left is the All-Living Rabb (الحي) who stands on His own (القيوم), the Beginning and the Everlasting.”

He states: “لِّمَنِ الْمُلْكُ الْيَوْمَ” (To whom belongs [all] sovereignty this Day?) (Surah Ghafir: 16). Allah SWT repeats this three times, and he answered it Himself directly through His statement: “لِلَّـهِ الْوَاحِدِ الْقَهَّارِ” (To Allah, the One, the Prevailing!) (Surah Ghafir: 16). Which means He is the One and Only. Indeed, His Might transcends everything and He is the Decider of everything. Afterwards, the first creation to be raised from the dead is the angel Raphael (Israfil) who will be commanded to blow the horn for the third time as the blow that will resurrect every creation. (See Tafsir al-Quran al-‘Azim, 4/69)

Imam al-Suyuti in his book al-Haba’ik fi Akhbar al-Mala’ik said: “I was once asked: ‘Will the angels die after the blowing of the horn?’ I answered: Yes. Allah SWT states: “وَنُفِخَ فِي الصُّورِ فَصَعِقَ مَن فِي السَّمَاوَاتِ وَمَن فِي الْأَرْضِ إِلَّا مَن شَاءَ اللَّـهُ”. (And the Horn will be blown, and whoever is in the heavens and whoever is on the earth will fall dead except whom Allah wills)

We (Imam al-Suyuti) explained that the exceptions are the angels who hold the Arasy, Gabriel, Raphael (Israfil), Michael and the angel of death, where they will all die afterwards. And Wahb bin Munabbih states that these angels are from among the first to be created and the last to die and will be among the first to be resurrected. Next, his words are strengthened by the dalil (evidences) regarding the death of the residents of the heavens and earth, until the angel Gabriel, Raphael, the angels responsible to hold the Arasy and the last would be the angel of death. (See al-Haba’ik fi Akhbar al-Mala’ik, pg. 91)

Who Does Allah SWT Chose as Exceptions from Dying When the Horn is Blown?

The scholars have differing opinions on who are the exceptions chosen by Allah SWT, they are divided into several opinions:

Disposition: Imam al-Qurtubi cited the opinion of his teacher Abu al-Abbas which states, the sahih opinion is that there is no sahih evidence that mentioned who is saved from dying from the blowing of the horn. All evidence is just muhtamal (assumptions). (See al-Tazkirah by Imam al-Qurtubi, pg. 167)

According to the above evidences, it can be understood that all angels will experience death after the second blow of the horn. The last angel that will die is the angel of death who is responsible to take the lives of other creations.

We end with the following supplication:

“O Allah, let us die with a good ending and don’t You let us die in the worse of endings.”