AL-AFKAR #88: THE RULING OF GIFTING AND PLACING FLOWERS ON THE COFFIN OF A DECEASED 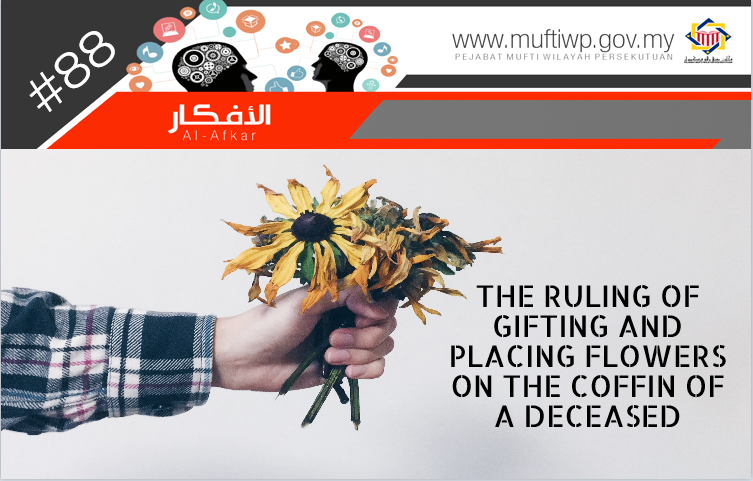 Assalamualaikum Datuk Mufti, sorry but I want to ask. The question: What is the ruling of gifting and placing flowers on the coffin of a deceased?

In Islam, the act of placing flowers on the grave is discussed by scholars. It is the same as scattering flowers on a grave, where it is ruled as permissible for it is analogically deduced (qiyas) with a famous hadith regarding the leaves of date tree. From Abdullah bin Abbas R.Anhuma, the Prophet PBUH once passed by two graves of people who were tortured:

"They are being tortured not for a great thing (to avoid). One of them never saved himself from being soiled with his urine, while the other was going about with calumnies (to make enmity between friends). He then took a green leaf of a date-palm tree split it into two pieces and fixed one on each grave. The people said, "O Allah's Messenger (ﷺ)! Why have you done so?" He replied, "I hope that their punishment may be lessened till they (the leaf) become dry."

“It is sunnah to place green leaves of date tree, for it will lessen the punishments of the deceased through the blessing of its recitation of tasbih and this is equated with the custom of scattering fresh and sweet-smelling flowers on a grave.”

Thus, the conclusion is, in Islam, placing flowers on a grave is sunnah for it is an intermediary medium for it would always recite tasbih to Allah SWT. Hopefully, for the tasbih recited by the flowers that Allah SWT would bless the deceased and lessen the deceased’s punishments.

Referring back to the question asked, what is the ruling of gifting and placing flowers on the coffin of a deceased?

According to the teachings of the Christians, flowers are used to symbolize grieve and sadness. In fact, there is not much difference with the teachings of Buddhism. In a funeral ceremony, gifting flowers is a symbol of honouring the deceased. It is greatly appreciated when we are visiting the house or grave of the deceased. However, it is inappropriate in funeral homes. White flowers are the traditional symbol of grief. Red flowers are a symbol of happiness and celebration and is inappropriate to be a gift during times of mourning. (Refer A Guide to a Proper Buddhist Funeral, pg. 12; Theravadin Buddhist Chinese Funeral, pg. 11)

In answering the above question, in our opinion, gifting and placing flowers on the coffin of a deceased is haram in Islam for it is a part of non-Muslims’ ritual in their funeral ceremony. Especially when the intention of the person placing the flowers is to ask for forgiveness from Allah SWT and bless the deceased, then it is haram. Allah SWT states:

The same is stated by Imam al-Nawawi who said:

“As for praying for disbelievers and supplicating that their sins are forgiven is haram according to the Quran and consensus of scholars.” (Refer al-Majmu’ Syarh Muhazzab, 5/120)

Our advice, if a person is forced to place flowers on the coffin of a non-Muslim deceased, then he should just place it without any intention. May Allah SWT guide us with His guidance. Amin.