AL-AFKAR #89: THE ORIGIN OF THE TERMINOLOGY ‘SUFI / TASAWWUF’ 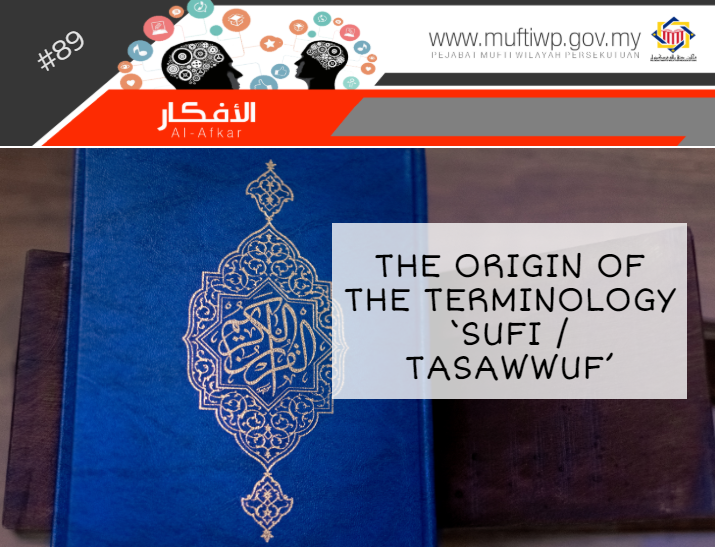 In the opinion of Dato’ Seri, when does the terminology ‘Sufi’ and ‘Tasawwuf’ started to be used in the Islamic world?

As explained in Al-Afkar series 86: The Definition of Tasawwuf, its expansion as a discipline of knowledge and the reasons why it emerges and expands a bit late. It is the same as other disciplines of knowledge like Fiqh (Islamic Jurisprudence), Nahu (Arabic Syntax), Sarf (Arabic Morphology), Tawheed and etc. However, its essence has come into existence since the time of the Prophet PBUH.

In fact, tasawwuf itself already exists since the time of Prophet Adam AS stated in a clear dalil in the saying of Allah SWT in the Quran:

Then Adam received from his Lord [some] words, and He accepted his repentance. Indeed, it is He who is the Accepting of repentance, the Merciful.

The salafussoleh differ on the meaning of ‘words’ in the above verse:

"Our Lord, we have wronged ourselves, and if You do not forgive us and have mercy upon us, we will surely be among the losers."

Therefore, the maqamat (spiritual levels/ranks) in tasawwuf start with tawbah (repentance). These levels or ranks are not the same in shape and turn according to the Sufis, but they are of the same opinion that the start of each maqam is tawbah. (See al-Luma’, pg. 68; 'Awarif al-Ma'arif, pg. 428)

The Usage of Sufi/Tasawwuf Terminologies

The phrase ‘Sufi’ was not used by the Prophet PBUH, the Companions and the Predecessors. This is as stated by Abu Nasr al-Sarraj:

“We never heard of the name al-Sufiyyah during the era of the Companions, the same goes for the time after it..the nickname ‘Sufi’ has never been given to any companions of the Prophet PBUH.” (See al-Luma’, pg. 42).

Ibn Khaldun stressed out that starting from the 2nd Hijri century, the society is inclined to the worldly affairs. During that time, the title “Sufi” was given to those who are inclined towards acts of worship. (See al-Muqaddimah, 3/76)

Al-Qushairi is of the opinion that the rise of tasawwuf starts before 200 Hijri. (See al-Risalah al-Qusyairiyyah, 1/62) while al-Surahwardi states that the terminology is not known until 200 Hijri. (See Awarif al-Ma’arif, pg. 63).

Abu Nasr al-Sarraj criticized their opinion which says that the terminology is new and introduced by the people of Baghdad. According to him, the terminology ‘Sufi’ is known since the time of al-Hassan al-Basri who studied from the companions of the Prophet PBUH. It is narrated that he once said: “I once witness a Sufi perform tawaf. Hence, I gave him something, but he refused and he said: ‘I already have four dawaniq (small silver coins). So, it is enough for me.” (See al-Luma’: 42)

Based on the above arguments, we are inclined to view that the terminology ‘Sufi’ and ‘Tasawwuf’ is known since the time of the Predecessors which is the early 2nd Hijri century. This is because, al-Hassan al-Basri passed away on 110 Hijri. As he had the chance to learn from some of the Companions and even narrated hadith from Uthman bin Affan, Ali bin Abi Thalib, Abu Musa al-Ash’ari, Abdullah bin Umar, Abdullah bin Abbas, Anas bin Malik and many more, then he is considered as a tabi’in.