AL-AFKAR #90: THE RULING OF SAYING THAT TAHLIL AND THE FUNERAL OF NON-MUSLIMS IS THE SAME 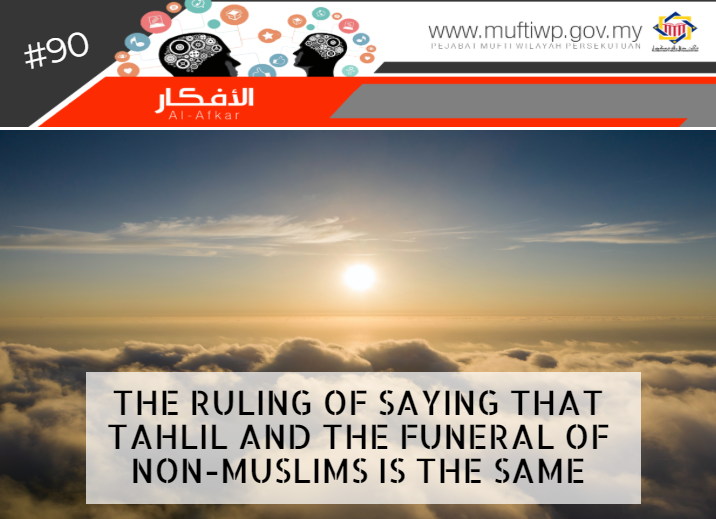 Assalamualaikum SS Mufti, I want to ask, what is the ruling of saying that tahlil is the same as the funeral of non-Muslims?

When a Muslims passes away, then his deeds will come to an end except for three deeds. The three deeds are stated as explained in the hadith of the Prophet PBUH:

“When a man dies, his acts come to an end, but three, recurring charity, or knowledge (by which people) benefit, or a pious son, who prays for him (for the deceased).”

Thus, the common practise in the Muslim community is that family members, friends and neighbours would assemble and recite the Quran, Yasin, dhikr and tahlil and others, gifting the rewards to the deceased. Usually, the assembly is named as the tahlil ceremony.

Tahlil means the word recited repeatedly to praise Allah SWT. In the context of the Muslim society in Malaysia, if a tahlil ceremony is mentioned, surely, it would give the impression of a ceremony of which supplication and dhikr are performed to ask for forgiveness and blessings of Allah SWT for the deceased.

In answering the question asked, is it permissible to say that tahlil is the same with the funeral ceremony of non-Muslims? Then, the answer is it is impermissible to do so and it is sinful because tahlil ceremony is held to gift the rewards of supplication and dhikr to a deceased Muslim.

Furthermore, it is clear that every Muslim is prohibited from praying for a non-Muslim to be forgiven for his sins even if the non-Muslim is a family member: