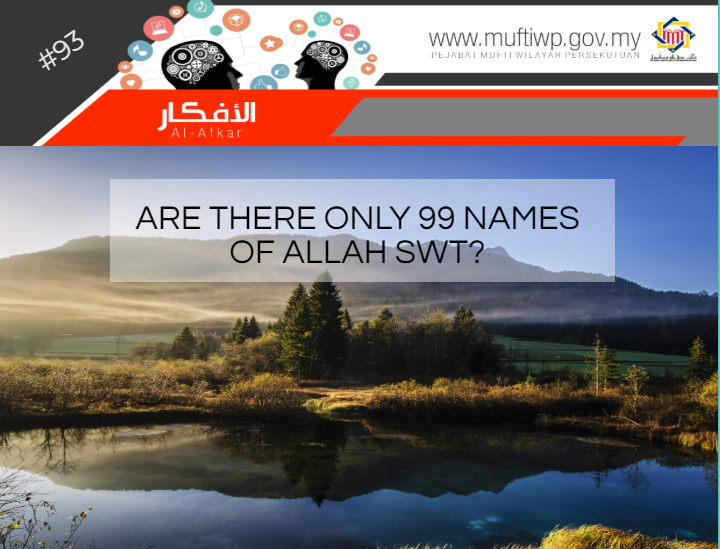 Assalamualaikum SS Dato’ Seri Mufti. Are the names of Allah only 99?

Basically, the names of Allah SWT are only known through what is told by He Himself in the Quran or through the saying of His prophets. Those names are among the tauqifiyyah matters. Imam al-Nawawi states: “Indeed, the names of Allah are tauqifiyyah, in which, they cannot be stated except through sahih dalil.” (See al-Minhaj fi Syarh Sahih Muslim Ibn al-Hajjaj, 7/188)

In answering the above question, we start with a hadith narrated by Abu Hurairah RA where the Prophet PBUH said:

"Allah has ninety-nine names, i.e. one-hundred minus one, and whoever knows them will go to Paradise."

Pertaining to the meaning of ‘أَحْصَاهَا’, we already explain it in detail in Irsyad al-Hadith Series 25: The Hadith of “Whoever Memorizes the 99 Names of Allah Will Enter the Paradise”. Briefly, we are of the opinion that it carries the meaning of believing with absolute certainty while invoking Him.

Indeed, Allah SWT’s names are limitless in numbers. There are other names which He keep secret by His unseen knowledge. In a hadith narrated by Abdullah bin Mas’ud RA, the Prophet PBUH said: “No problems or sadness that befall a person, then he recites:

O Allah, indeed, I am Your servant, the offspring of Your male servant, the offspring of Your female servant, my forelock is in Your hands, Your decree has been stated, You have been just upon me with Your decree, I beg of You by all the names You name Your-self, or what You have taught to one of Your creations, or what You have revealed in Your book, or those You remain as secrets in Your knowledge, (I beg of You) to make al-Quran as the coolness of my heart, the light in my chest, the remover of my sadness, the lifting of my hardships,”

(When one recites this du’a), surely, Allah will remove his hardships and sadness and give him a way out. Abdullah bin Mas’ud RA asked: “O the Prophet PBUH, should I learn this du’a?” He answered: “Surely, whoever hears of it must learn it.”

Imam al-Khattabi and others said: “This shows that He has names He keeps as secrets. This shows that what is said by the Prophet PBUH: “Indeed, Allah has 99 names, whoever reads it will enter Paradise,” means that Allah SWT has 99 names in which when one believes in them, he will enter Paradise. Just like when one says, “I have a thousand dirham which I prepared for sadaqah”, but his money in truth is so much more than that. And Allah SWT says in the Quran, “وَلِلَّهِ الأَسْمَاءُ الْحُسْنَى فَادْعُوهُ بِهَا” (And to Allah belong the best names, so invoke Him by them). He commands to invoke by these best names in an absolute manner. He never states that His names are only 99.” (Cited from Majmu’ al-Fatawa, 22/282)

While Ibn Qayyim explains: These best names of Allah are limitless in number. Indeed, Allah has names and attributes which He keeps secrets in His knowledge. Even the angels who are close to Him also don’t have knowledge on this, neither do the Prophets AS as stated in the above hadith (by Imam Ahmad). He already makes His names divided into three divisions:

There are names of Allah SWT which He manifests to others that they become known, and there are other names which He does not state and remains as secrets in His knowledge that no single creation knows of it.

May Allah SWT bless us with knowledge and understanding to practice all His commandments. Amin.