AL-AFKAR #95: KASHF ACCORDING TO AL-QURAN AND SUNNAH 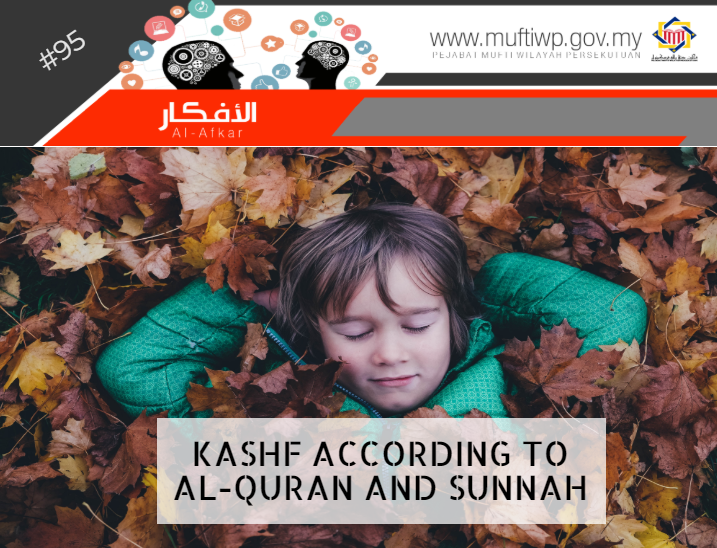 Do al-Quran and al-Sunnah mention or explain the matter of kashf?

The phrase ‘kashf’ comes from the Arabic word (كشف). Ibn Manzur said: “Kashf is defined as you unveil something which conceals or protects it.” (See Lisan al-‘Arab, 9/300)

While al-Jurjani said: “Kashf lexically means the removal of the veil, while it technically means something that illuminates the heart, enabling it to see into the unseen world and the absolute reality of its oneness of witness (See al-Ta’rifat, pg. 237)

Abu Nasr al-Sarraj defines kashf as explaining what is veiled from one’s understanding; it is unveiled from servants as though he sees it through naked eyes. (See al-Luma’, pg. 422)

In Kamus Dewan, kashf is defined as unveiling the secrets of the unseen through spiritual insight (bashirah); unveiling the heart. [1]

A true sufi does not accept kashf ilmi (knowledge unveiling), kashf dzauqi (intuition mystique) or kashf wujdani (ecstasy), unless it is in line with the Quran and the Sunnah. This is as stated by Imam Abu Sulaiman al-Darani, “It is possible to befall me, the thought of particular nation on certain days, but I refuse to accept it (from the kashf) unless there are statements from these two just witnesses, which are al-Quran and al-Sunnah.” (See Tabaqat al-Sufiyyah, 1/76)

This is the determination of the past sufis while living their daily lives of worship. Whatever befalls them must be in accordance with al-Quran and al-Sunnah.

Kashf in al-Quran and al-Hadith

As for the ship, it belonged to poor people working at sea. So I intended to cause defect in it as there was after them a king who seized every [good] ship by force. (79) And as for the boy, his parents were believers, and we feared that he would overburden them by transgression and disbelief. (80) So we intended that their Lord should substitute for them one better than him in purity and nearer to mercy. (81) And as for the wall, it belonged to two orphan boys in the city, and there was beneath it a treasure for them, and their father had been righteous. So your Lord intended that they reach maturity and extract their treasure, as a mercy from your Lord. And I did it not of my own accord. That is the interpretation of that about which you could not have patience." (82) And they ask you, [O Muhammad], about Dhul-Qarnayn. Say, "I will recite to you about him a report." (83)

According to Imam al-Qushairi: “After Khidir and Moses AS both go their own way, Moses’ heart was not calm that it seems like he disagrees. He then quickly clears the feeling from his heart by what was explained to him. It is uncovered from him, the secret purposes of Khidir damaging the ship to save the people, so that they will not be victimized by the king who loves to seize others’ ships by force. So, the ships remain with their owners. The anger is an affliction, (as what was done) is the best for their safety.” (See Lata’if al-Isyarat, 2/412)

It is narrated by Anas bin Malik RA, he said,

Once the Iqama was pronounced and Allah's Messenger (ﷺ) faced us and said,

"Straighten your rows and stand closer together, for I see you from behind my back.'

It is narrated by Anas bin Malik RA, where he said, “The Prophet PBUH said:

"Zaid took over the flag and was martyred. Then it was taken by Jafar who was martyred as well. Then `Abdullah bin Rawaha took the flag but he too was martyred and at that time the eyes of Allah's Messenger (ﷺ) were full of tears. Then Khalid bin Al-Walid took the flag without being nominated as a chief (beforehand) and was blessed with victory."

The death of these Companions was told by the Prophet PBUH long before their death. This shows the existence of kashf in the Prophet PBUH as stressed out by Sheikh Abdul Qadir ‘Isa al-Shazili. (See Haqa’iq ‘an al-Tasawwuf, pg. 340-342)

Kashf is one of Allah SWT’s blessings upon His chosen servants. Any kashf which contradicts with al-Quran and al-Sunnah whether it happens to a person who claims to have it or what is told from others should be rejected to avoid confusion.

May Allah give us understanding in this religion. Ameen.