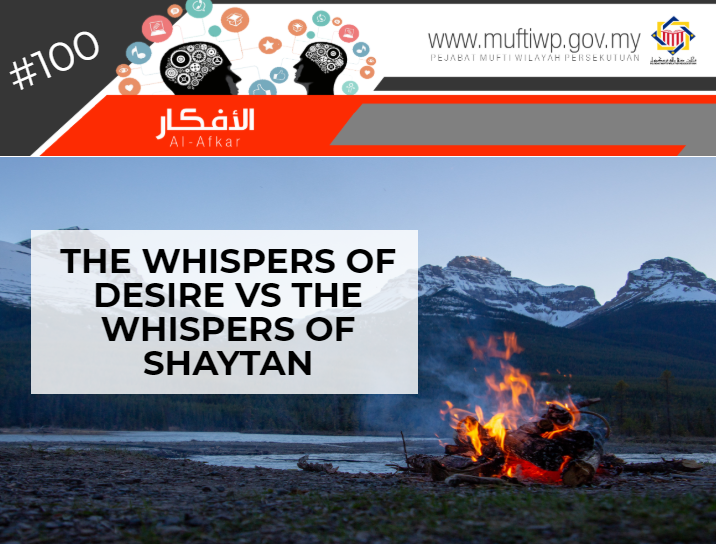 In answering the above question, among the characteristics of the whispers of desire is it leads us towards the evildoings in a specific and precise manner. Sheikh Muhammad Mutawalli al-Sha’rawi explained: “Among the characteristics of whispers of desire is it strongly attracts us to evildoings which are specific and precise. This is in accordance with the saying of Allah SWT in the Quran:

Indeed, the soul is a persistent enjoiner of evil, except those upon which my Lord has mercy.

Imam al-Tabari explains: “Indeed, desire meant here is the desire of a servant which directs towards all of his wants, even towards matters prohibited by Allah SWT.” (See Jami’ al-Bayan ‘an Ta’wil Ay al-Quran, 13/209)

Sheikh al-Sa’di mentioned that desire will consistently direct people towards evildoings as well as sinning. This bad desire becomes the ride for shaytan to mislead humans. And from this path of desire, shaytan will enter except for those whom Allah SWT bless. (See Taisir al-Karim al-Rahman fi Tafsir Kalam al-Mannan, 3/408)

While Sheikh al-Maraghi in commenting on this verse states that this verse is the closing statement of the wife of al-‘Aziz the same as the opinion of Abu Hayyan in the book al-Bahr. Then, he states: “Indeed, the desire of humans always directs them towards evildoings because there are encouragements of one’s physical and heart’s desires as they are instilled in it, all sorts of strength and means to attain pleasure including the tendency whispersed by the shaytan.” (See Tafsir al-Maraghi, 7/3380)

Sheikh al-‘Azhim Abadi explains that the meaning of “شر الشيطان” is the whisperss of doubt as well as its deviance, while the meaning of syirkah (شرْكه) is whatever leads to shirk to Allah. It may also be recited with syarakah (شركه) which are shaytan’s ropes and traps to enjoin humans towards evildoings. (See Aun al-Ma’bud, 13/276).

Sheikh al-Mubarakfuri explains, it means ‘bestow taufiq to me towards al-rusyd which is guidance to do good. And protect me from the evildoings of myself, in which it is the place where evildoings grow. (See Tuhfah al-Ahwazi, 9/455)

Imam al-Qushairi states that striving to fight the self (desire) and manage it is by blocking what is usually done, as well as commanding our-self to constantly fight the desire at all times.

According to Junaid al-Baghdadi, when desire wants to encourage towards evildoings, it will constantly influence and brings towards it until it succeeds. He said: “Desire when asking something from you will make constant seduction and constantly influence you until its requests are fulfilled and purposes are achieved. Unless when it is failed by a true constant mujahadah (personal struggle). Then, it will try to influence again.”

This differs from the shaytan’s. When it fails to seduce people towards an evil act then it will seduce to do other evil acts. Junaid al-Baghdadi also said: “When shaytan calls you towards certain wrongdoing, but you refuse, they will go to other wrongdoings. This is because all wrongdoings towards Allah SWT’s teachings are the same for them. They intend to call towards any wrongdoing at all times. And they never specify the wrongdoings in one matter or another.”

The characteristic of desire is said as something specific towards an evil act. It will constantly seduce and influence towards it until the evildoing is achieved.

While the characteristic of shaytan’s whispers is something not specific only towards one wrongdoing only. If they do not succeed towards any wrongdoing, they will go to another wrongdoing as all wrongdoings are the same for them.