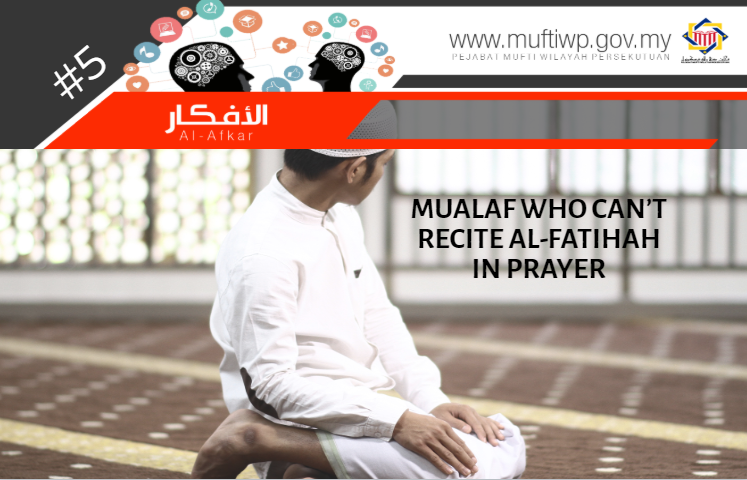 How should a muallaf pray when he hasn’t memorized the Fatihah?

Prayer is an obligatory worship for every Muslim who has recited the syahadah. Allah SWT state:

“And establish prayer and give zakah,”

“Islam is based on (the following) five (principles): To testify that none has the right to be worshipped but Allah and Muhammad is Allah's Messenger (ﷺ). To offer the (compulsory congregational) prayers dutifully and perfectly. To pay Zakat (i.e. obligatory charity). To perform Hajj. (i.e. Pilgrimage to Mecca). To observe fast during the month of Ramadan.”

Hence, when a muallaf who is now considered as a Muslim, it is obligatory for him to learn the requisites of prayer and establish prayer according to his capability who is new to Islam.

Originally, the two obligatory recitations in prayer is the Fatihah, tasyahhud and praise and salutation for the Prophet PBUH, while other recitations are sunnah. For a muallaf, there are several considerations when he hasn’t memorized the Fatihah:

Islam is a comprehensive religion and suitable for its followers. Allah SWT state:

“So, fear Allah as much as you are able,”

May Allah SWT give us strength to continue learning in our religion as well as spreading the understanding and beauty of Islam to our society.

[1] For example, the facilitator is able to perform prayer and be the imam/ pray beside him/ stay near him and raised his voice so that the muallaf could follow the recitation. Furthermore, the muallaf could also use available technology such as voice recorder or smartphones with earphones to listen and follow the recitation without disturbing others in the congregation.
Print   Email