AL-AFKAR #3: INTERESTED IN ISLAM, BUT DO NOT UNDERSTAND THE CONCEPT OF FREE WILL IN ISLAM 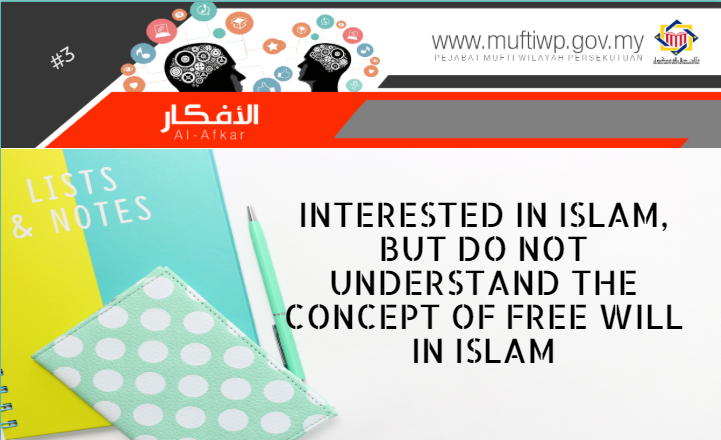 I am a non-Muslim and interested in Islam. It is just that I do not understand the concept of free will and Allah’s will in Islam. Are humans free to choose what they want, or is it otherwise?

Thank you for your interest to learn more about Islam. For your information, Muslims are divided into three sects upon this issue:

The moderate and harmonize sect between the will of humans and Allah is Ahl al-Sunnah wa al-Jama’ah, which is also the majority sect Muslims believe in. Allah SWT has a right to decide because He know what is best for His slaves. Allah SWT is the All-Knowing and the All-Wise.

“And you do not will except that Allah wills. Indeed, Allah is ever Knowing and Wise.”

“And you do not will except that Allah wills - Lord of the worlds.”

We give some examples of circumstances to make it easier to understand.

As the conclusion, Ahl al-Sunnah wa al-Jama’ah believes that: