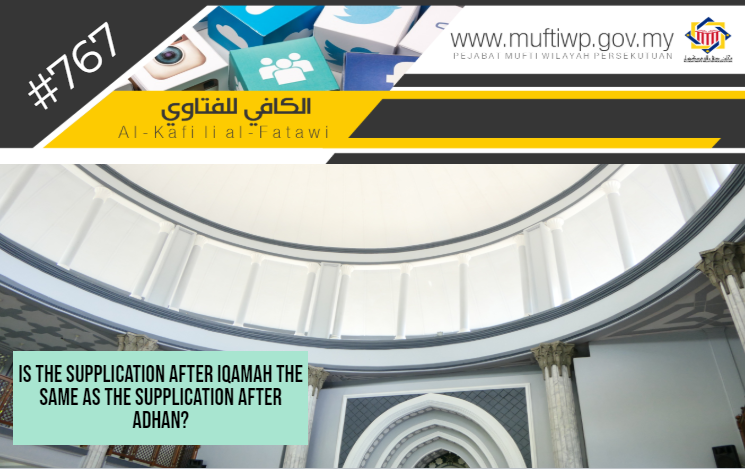 "Whoever after listening to the Adhan says, 'Allahumma Rabba hadhihi-dda` watit-tammah, was-salatil qa'imah, ati Muhammadan al-wasilata wal-fadilah, wa b`ath-hu maqaman mahmudan-il-ladhi wa`adtahu' [O Allah! Lord of this perfect call (perfect by not ascribing partners to You) and of the regular prayer which is going to be established, give Muhammad the right of intercession and illustriousness, and resurrect him to the best and the highest place in Paradise that You promised him (of)], then my intercession for him will be allowed on the Day of Resurrection".

According to the above hadith, the scholars agreed that there is a supplication after the adhan, but they have differing opinions as to whether the same supplication is recited after the iqamah.

Imam Ibn Qudamah from madhab Hanbali states that it is sunnah to recite zikr for those who hear the iqamah with the same zikr recited during the adhan. (Refer Al-Mughni, 1/310)

This opinion shows that he does not differentiate between the adhan and iqamah. The same as answering the iqamah, it is also sunnah to supplicate after the iqamah with the same supplication after the adhan.

However, Imam al-Mardawi from madhab Hanbali said there is no supplication that is sunnah after the iqamah and before takbiratul ihram. (Refer Al-Insaf fi Ma’rifati ar-Rajih min al-Khilaf, 2/41)

Some scholars also added that it is sunnah to supplicate with any supplication after the iqamah and this is what is practised by Imam Ahmad where he supplicates with raised hands. (Refer Mathalib Uli an-Nuha, 1/303)

To conclude, in our opinion, there is a supplication after the iqamah according to the opinion of scholars of madhab al-Syafie and this is supported by several opinions in other madhabs.