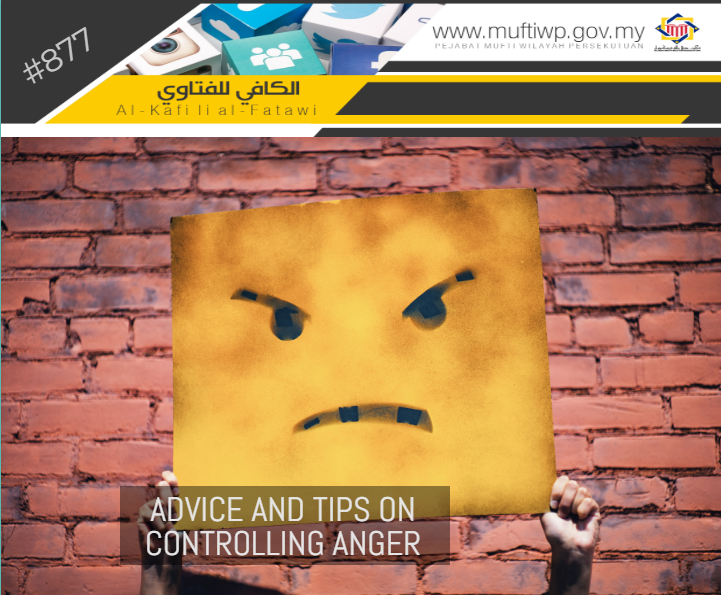 Assalamualaikum. Can you give some tips and advice on how I can control my anger?

Bismillah, alhamdulillah, praise and thanks to Allah for the many countless blessings He has blessed us all with. Blessings and salutations to the Prophet Muhammad PBUH, his wives, his family, companions and all those that follow his teachings to the day of judgement.

Anger is A Natural Feeling

Anger is a feeling that exists naturally in humans. It is also a spontaneous expression that arise when one is hurt, injured or when faced with problems. The Prophet PBUH himself is angry in several situations, one of the incidents is when Usamah bin Zaid killed an enemy on the battlefield, although the enemy has recited the syahadah. The Prophet PBUH said to him:

“Did he profess" There is no god but Allah," and even then, you killed him? I said: Messenger of Allah, he made a profession of it out of the fear of the weapon. He (the Holy Prophet) observed: Did you tear his heart in order to find out whether it had professed or not?”

A marfu’ hadith narrated by Imam Tirmizi explained the anger of the Prophet PBUH:

“Worldly matters did not anger the Prophet PBUH. As for the truth, nothing could stand in front of him until he championed the truth. The Prophet PBUH also is never angered regarding his personal matters and did not try to prioritize himself.”

Restraining and controlling anger is a commendable and encouraged attribute. Allah SWT state in the Quran when describing the attributes of the people of taqwa:

“Who spend [in the cause of Allah] during ease and hardship and who restrain anger and who pardon the people,”

Allah SWT also describes the attributes of believers and who depend on Him as:

“…and when they are angry, they forgive,”

In a famous hadith narrated by Abu Hurairah RA:

In another hadith of the Prophet PBUH, the Messenger PBUH said:

"When Allah created the creations, He wrote with Him on His Throne: 'My Mercy has preceded My Anger."

The Advice of the Prophet PBUH in Controlling Anger

There are several advice of the Prophet PBUH to us when we are angry, among them are:

“When one of you becomes angry while standing, he should sit down. If the anger leaves him, well and good; otherwise he should lie down.”

“Anger comes from the devil, the devil was created of fire, and fire is extinguished only with water; so, when one of you becomes angry, he should perform ablution.”

"No judge should give judgement between two people while he is angry."

The meaning of the above hadith should not be confined to passing judgements as a judge but is applicable in other situations that need a critical decision especially when it involves the public. Take some time to calm oneself before making any decisions.

“When one of you is angry, he should be silent.”

Stay silent when one is angry is better, for in anger the words uttered may hurt others or even harm himself.

Although anger is generally considered as a negative feeling or expression, however in several situations, anger is permissible according to syarak. For example, one gets angry when Islam is insulted or cruelty and oppression are happening towards the weak. However, the feelings of anger should be controlled and channelled correctly and don’t let it overwhelm a person which would lead to actions that transgress the syarak.

The above-stated advices of the Prophet PBUH should be applied in alleviating our anger and controlling our feelings so that we will not lose control of ourselves and our rationality.