AL-KAFI #902: THE RULING OF CURSING THE RAIN 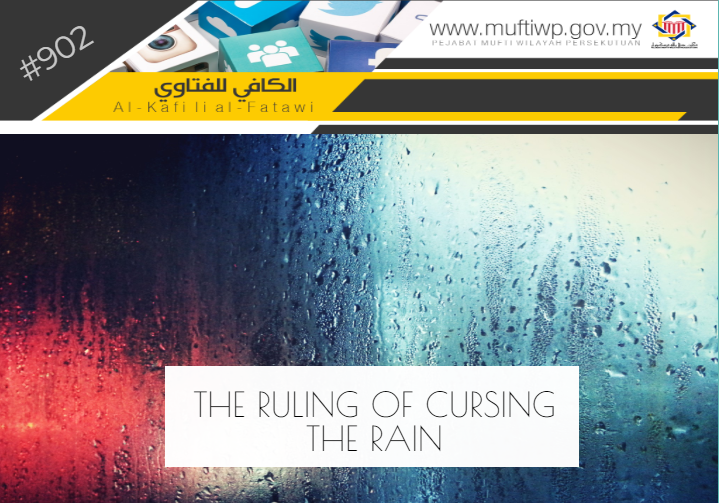 Assalamualaikum wbt, sir. Now, since it is the monsoon season, we find that there are people who complained about the rain and some even curse the rain itself, for in their opinion it is just a hindrance in their work and daily lives. What is your opinion regarding this?

Basically, rainfall has its own season (monsoon season) according to certain locations. As an example, the Meteorology department state that Malaysia will experience the annual Northeast Monsoon from November to March. Northeast Monsoon will result in heavy rain especially in the states on the east coast of Peninsular Malaysia and west of Sarawak. [1]

Hence, there will be heavy rainfall during these times compared to other times in Malaysia. It is similar to the syita’ (cold) season for countries located in the middle east, during which time the frequency of rainfall is high.

Thus, when one curses the rain, then in truth he is cursing a certain season or time. In a hadith from Abu Hurairah RA, the Prophet PBUH said:

"Allah said: "The son of Adam hurts Me by abusing Time, for I am Time; in My Hands are all things and I cause the revolution of night and day.' "

Imam al-Hafiz Ibn Hajar al-Asqalani commented on the above hadith, citing the words of Imam al-Khattabi, where he said: The meaning of the hadith is: “I (Allah) is the owner of time and manages anything that is related to time.”. Then anyone who curses time due to certain reasons, then his curse returns back to Allah who are in charge of time. Indeed, Al-Dhar is time and is the zharaf for anything that’s happening. Refer Fath Al-Bari, Ibn Hajar (8/437).

The above hadith is clear guidance stating that cursing time is the same as cursing Allah SWT. Hence, this act is clearly prohibited. Another hadith that states the prohibition of such act is narrated by Abu Hurairah RA, where the Prophet PBUH said:

“Let none of you complains about time, for Allah is time.”

In the above hadith, there is a clear la al-Nihayah (prohibition) which results in the prohibition ruling of it according to fiqh.

To close, we would like to state that it is prohibited to curse the rain. The reason is Allah SWT is the one who sent the rain down, and thus, cursing the rain in truth is a curse towards the one who sent it down in the first place, which is Allah SWT. Basically, rain is a blessing from Allah SWT. Furthermore, it is encouraged for a Muslim who experiences rain in his place to supplicate as the following:

This is the manner taught to us in sunnah nabawiyyah to supplicate to Allah SWT so that everything that happens to us is of benefit. This is prioritized incurring the feeling of redha (contentment) of a slave towards Allah SWT for everything that He did for us according to His wisdom and His knowledge for all His creations.

Moreover, this prohibition is not limited to cursing the rain. But believing in bad luck and cursing anything such as certain time, month, year or drought, then it is also prohibited, for Allah SWT is the one who manages it all.

Lastly, may Allah SWT give us the correct understanding in practising the religion. Ameen.