AL-KAFI #997: MEMORIZATION OF THE QURAN AS DOWRY 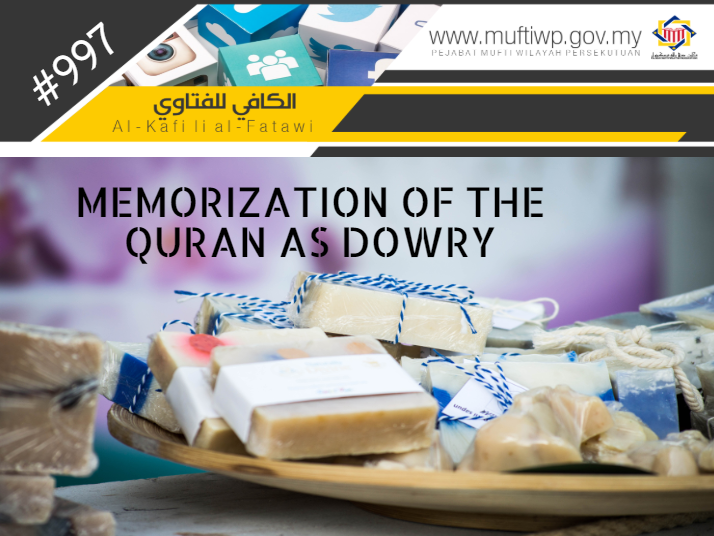 Assalamualaikum SS Dato’ Seri Mufti. Regarding the matters related to dowry, there was a time where the memorization of the Quran is given as dowry. However, now dowry must be in the form of a property. What is your opinion regarding this? And what is the meaning of the memorization of the Quran as a dowry? Hope for an explanation from you, thank you.

The author of al-Fiqh al-Manhaji state: Dowry or al-Sadaq (الصداق) is an obligated property given by a husband to his wife after aqad for marriage. It is named as sadaq indicating that the man really wanted to get married.

And give the women [upon marriage] their [bridal] gifts graciously.

Ibn Kathir said: According to Ibn Abbas, the word النحلة means mahar (dowry). Ibn Zaid further explains, it means something that is obligated to be given to the wife due to aqad for marriage. A man is obligated to give marriage gift to his wife graciously. (See Tafsir al-Quran al-‘Azim, 2/235)

Is it permissible to give the memorization of the Quran as dowry?

For dowry or mahar, it is originally referred to something. For example, a person has the knowledge to teach others to recite the Quran and others, then it is permissible.

However, the condition for dowry is giving something. The Prophet PBUH said:

"Go and search for something) even if it were an iron ring."

Even if it is an iron ring, it is something that we can see and this is the real meaning of dowry.

In a narration by Muslim, it is stated:

“Go, I have married her to you, and you teach her something of the Qur'an.”

“In the above hadith, there is a wisdom of which it is permissible to give dowry in the form of lessons of the Quran.” (See al-Minhaj Syarh Sahih Muslim, 9/214)

May Allah SWT bless us with understanding in practising His commandments. Amin.