AL-KAFI #1000: THE RULING OF PRAYING BESIDE RESTROOM 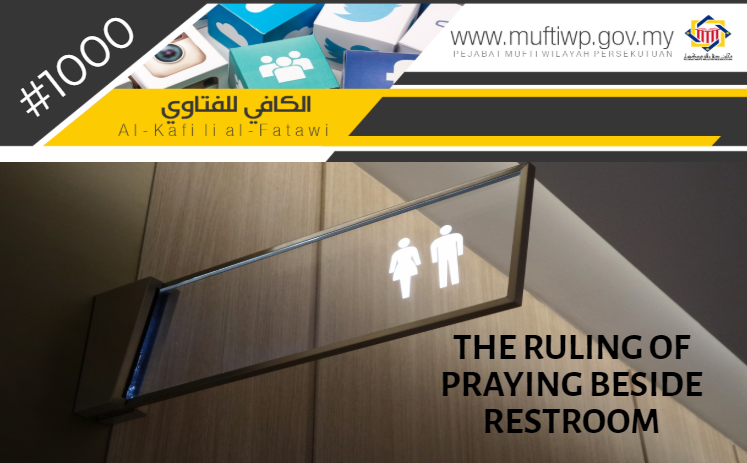 During Friday prayer, I prayed in the prayer section beside the restroom, is this permissible?

In Islam, before prayer, the chapter on purification is explained first. This is seen when Islam commanded Muslims to ensure the purity and cleanliness of the three main things for prayer which are the purity of oneself, clothing and place of prayer.

The Prohibition of Praying in Restrooms

The worship of prayer is one of the pillars in Islam and the most frequent worship in our lives. Ths, to ease Muslims to perform it, one can pray anywhere. This is explained in a hadith from Abu Sa’id al-Khudri RA:

The whole earth is a place of prayer except public baths and graveyards.

It is also stated that among the places which are prohibited to pray is public baths (restrooms) and this is also mentioned in another hadith from Ibn Umar R.Anhuma, where the Prophet PBUH said:

"The Prophet prohibited Salat from being performed in seven places: the dung heap, the slaughtering area, the graveyard, the commonly used road, the wash area, in the area that camels rest at, and above the House of Allah (the Ka'bah)."

The strongest opinion as to the prohibition (of praying in a restroom) is because it is the house of shaytan, then it is makruh tanzih (it is not a sin) and the prayer is valid. See al-Majmu’ (3/166).

Furthermore, another thing that should be considered is khusyuk in prayer. If when someone prays beside the restroom and this would affect his khusyuk due to the smells coming from it or if the prayer section is the route of people walking, then it is best to avoid such places and pray in another place. Imam Ramli stated that this is one of the reasons that it is makruh (undesirable) to pray in restroom for it is the route of people walking which would prevent one from having khusyuk in prayer. If it is not a route for people walking, then it is not makruh. Refer: Fatwa al-Ramli (67).

According to the above discussion and evidences, in our opinion praying outside of restroom is not included in the prohibition stated in the hadith, for it is not inside the restroom.

However, if the prayer section provided is full and one is forced to pray close to restroom, then he should ensure that the place is clean and pure before he performs his prayer. The reason is, ensuring the cleanliness and purity of the place is one of the valid conditions of prayer. It is best to close the door of the restroom differentiating the restroom and prayer areas.

May Allah SWT give us understanding in obeying His commandments. Amin.